It is also not a plane, nor is it Superman. But it is a Tuner. 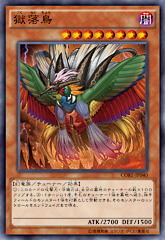 Gokurakuchou/”Bird of Paradise Lost”
DARK Wyrm/Tuner/Effect
LV8 2700/1500
(1): This card gains 100 ATK and DEF for each Tuner monster in your Graveyard.
(2): Once per turn: You can send 1 Tuner monster from your hand to the Graveyard, then target 1 monster the opponent controls; gain control of that monster until the End Phase.

*This name, surprise surprise, is a pun. The word “gokurakuchou” normally means “bird of paradise”, but the “goku” has been replaced with a “goku” meaning “prison” (it’s also the “goku” in “jigoku”, meaning “hell”) and the “raku” has been replaced with a “raku” meaning “falling” (it can have the same connotation as the English word, i.e., “falling into sin/corruption/depravity”. So it’s like a reverse bird of paradise.