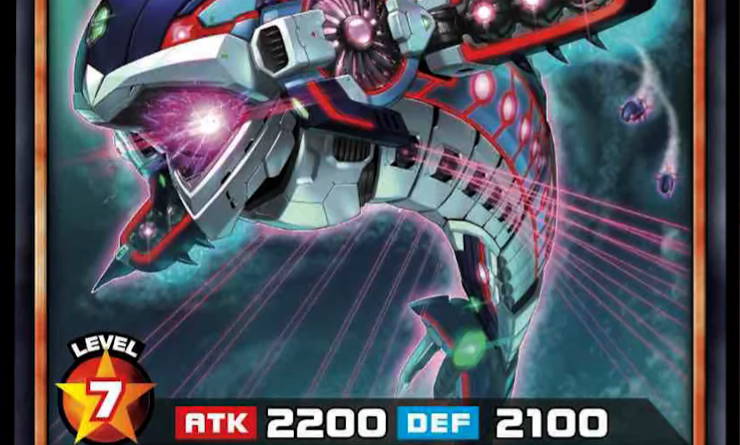 Some cross-promotion with the Character Pack and then also fish.
And 1 dragon. 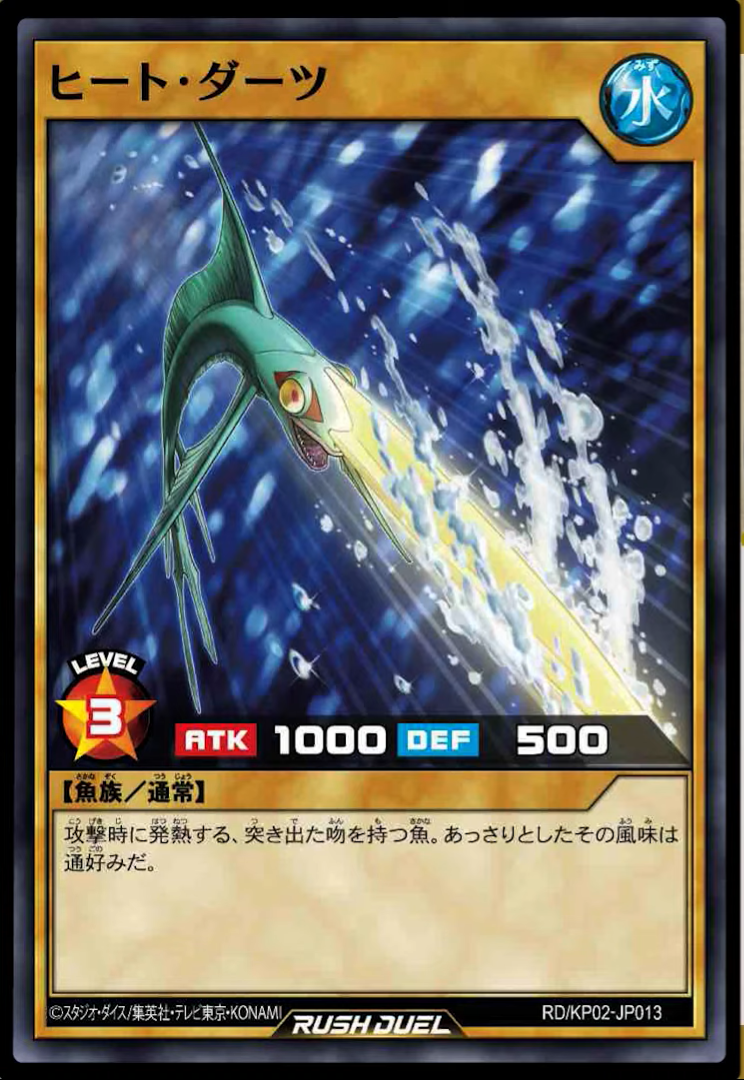 RD/KP02-JP013 Heat Darts
WATER, Fish/Effect, Lv 3, ATK 1000, DEF 500
A fish with a protuding proboscis that heats up when attacking. Its light flavor is considered a delicacy.
TL Note: A play on datsu, the Japanese word for “needlefish”. 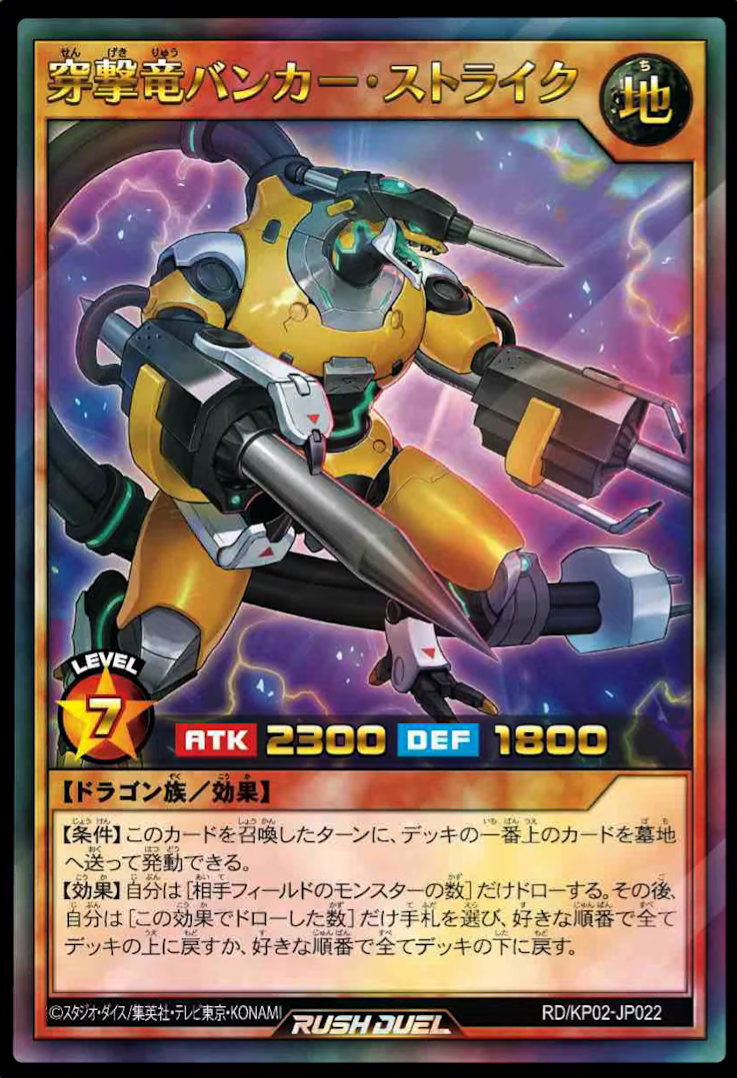 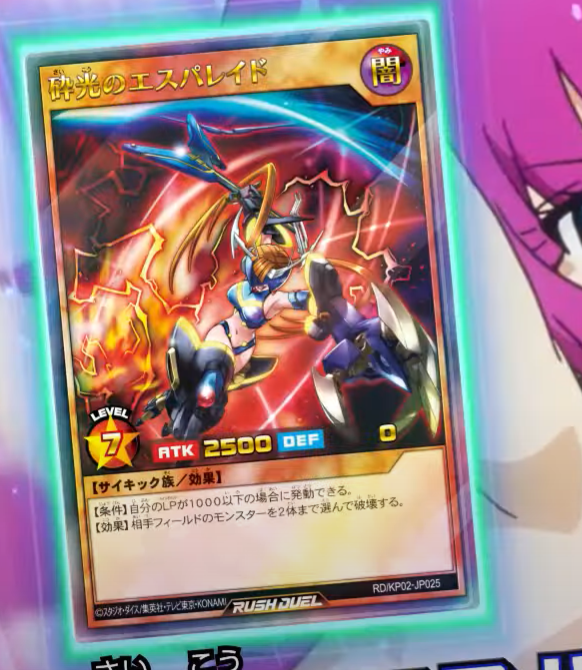 RD/KP02-JP025 Saikou no Esperaid/Esperaid of the Smashing Light
DARK, Psychic/Effect, Lv 7, ATK 2500, DEF 0
(Requirement) If your LP is 1000 or less.
(Effect) Choose up to 2 monsters your opponent controls and destroy them.
TL Note: Saikou normally means “best” or “greatest” when written with different kanji. 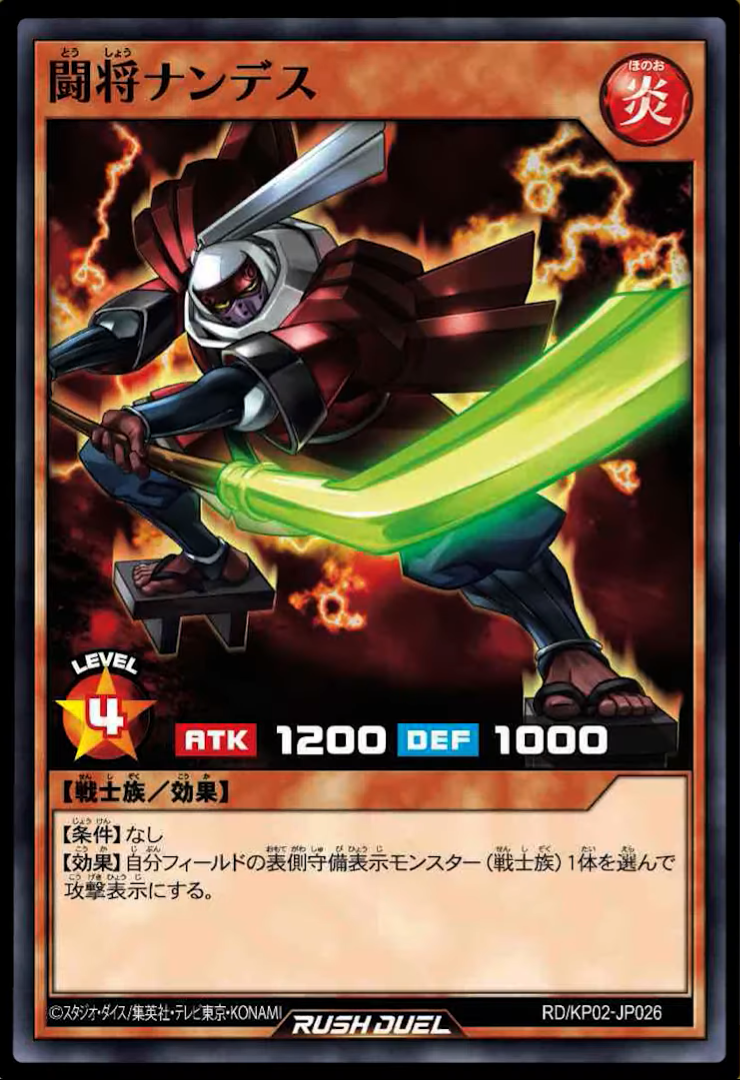 RD/KP02-JP26 Toushou Nandes/Battle Commander Nandes
FIRE, Warrior/Effect, Lv 4, ATK 1200, DEF 1000
(Requirement) None
(Effect) Choose 1 face-up Defense Position monster (Warrior) you control and change it to Attack Position.
TL Note: Nandes (or “nan desu”) is a way to say “that’s X”. So the name is a pun on “this is a battle commander.” 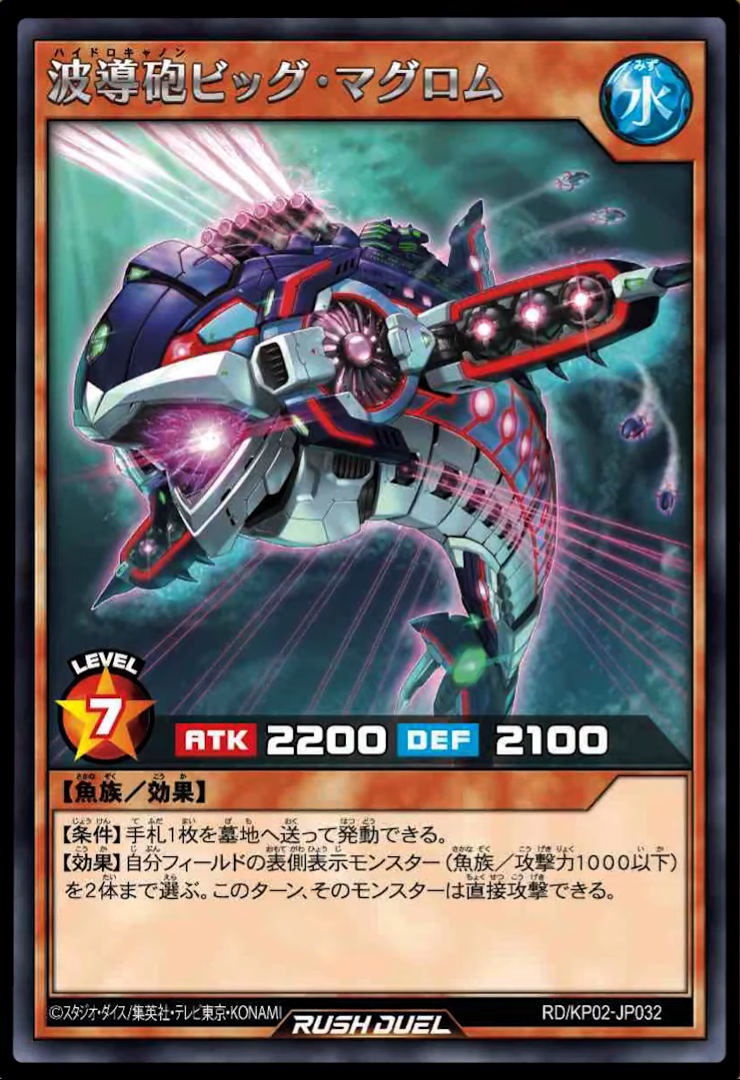 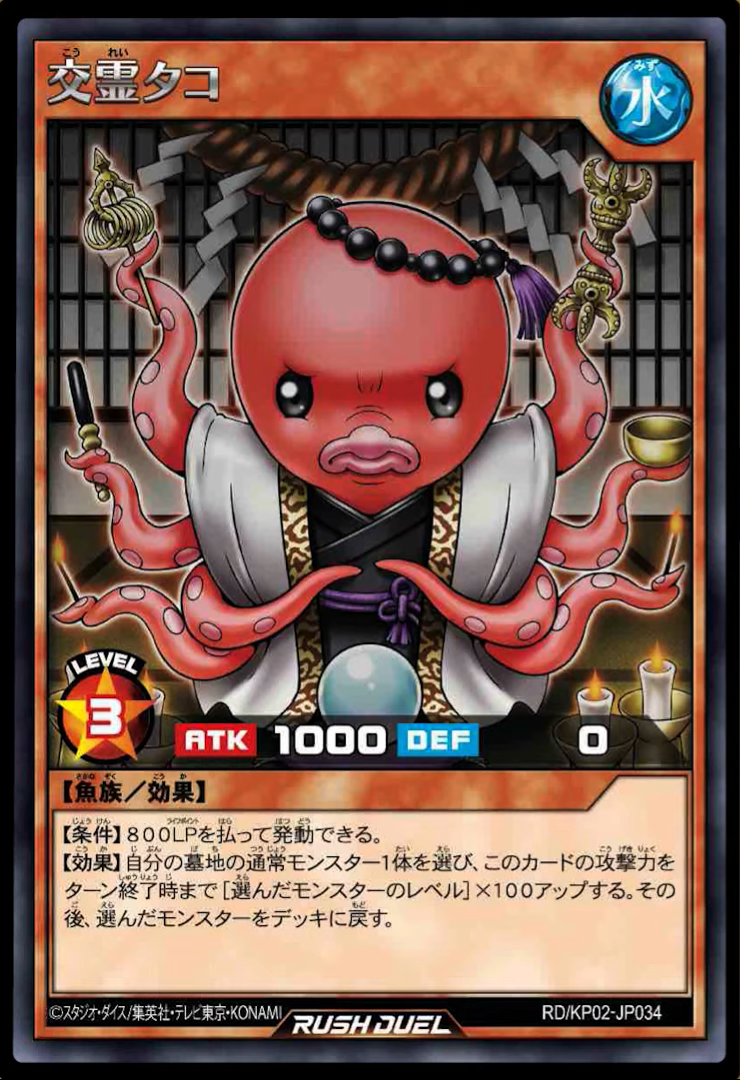 RD/KP02-JP034 Kourei Tako/Medium Octopus
WATER, Fish/Effect, Lv 3, ATK 1000, DEF 0
(Requirement) You can pay 800 LP.
(Effect) Choose 1 Normal Monster in your GY, and this card gains ATK equal to [the chosen monster’s Level] x 100 until the end of this turn. Then, shuffle the chosen monster into the Deck.
TL Note: Medium as in “spirit medium”, or “itako“. 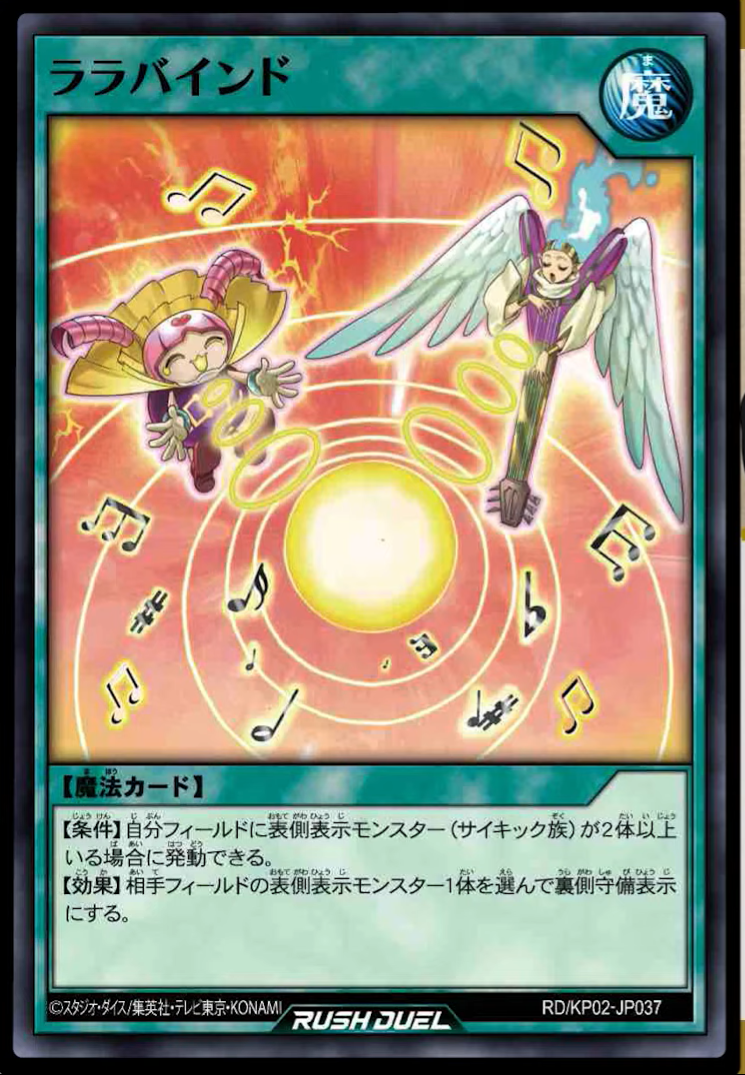 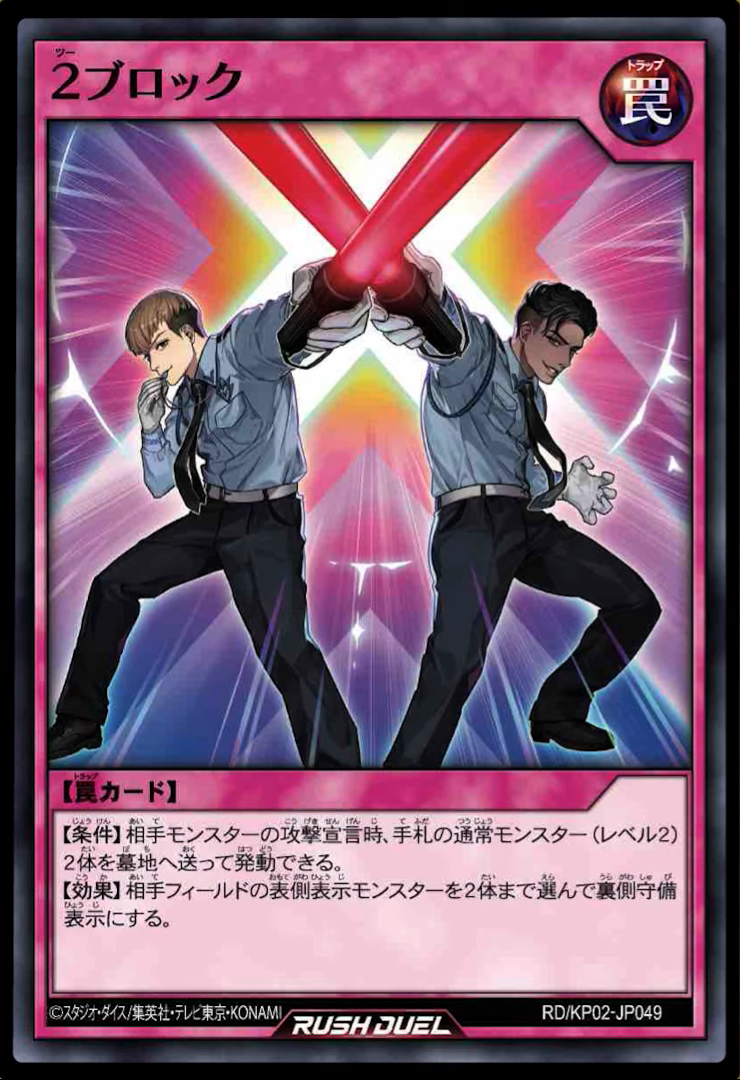 RD/KP02-JP049 2-Block
Normal Trap
(Requirement) When an opponent’s monster declares an attack, you can send 2 Normal Monsters (Level 2) from your hand to the GY.
(Effect) Choose up to 2 face-up monsters your opponent controls and change them to face-down Defense Position.
TL Note: A play on “two-block” being a loanword used in Japanese to mean “undercut (hairstyle)”.