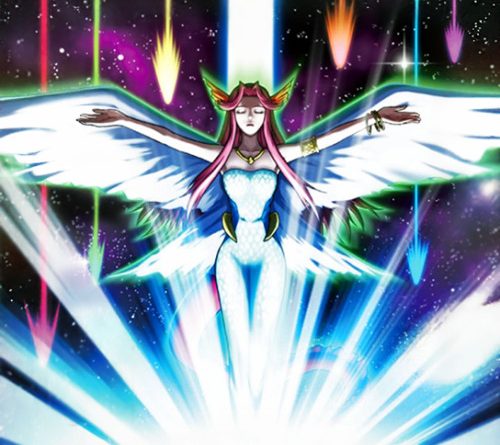 Konami has just posted the concept art for Stardust Trail on their EU Twitter, a card releasing along with the new Stardust Dragon support in Dawn of Majesty tomorrow.

In the centre of the artwork is a coloured sketch of the monster featured, obstensibly just to display all the characteristics of the card for more dynamic poses such as the one used for Stardust Trail. (Bottom Left.)

Stardust Trail shows a monster who first appeared in the art of Converging Wishes (Bottom Right) in 2017’s Duelist Saga. The Japanese in the Top-Right translates to “Stardust Trail☆4”.

A new shining star comes, leaving a path of radiant light when Summoning your Synchro Monsters with Stardust Trail. Open some Dawn of Majesty booster packs, out tomorrow to get it – and get ready to rev it up!#YUGIOH #YuGiOhTCG #DAMA #DawnofMajesty pic.twitter.com/myjOJoUbJQ