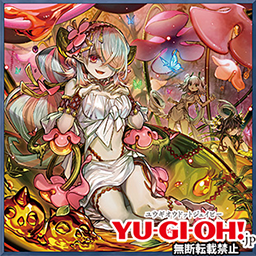 It’s time for the winter lingerie show, where you get to be eaten alive! The Deck comes with a “Banquet Invitation Pack” that contains cards that’ll power up your Traptrix Deck! SD45-JPP01 Citris no Kowakuma (Traptrix Pinguicula)
Rank 4 EARTH Plant Xyz Effect Monster
ATK 2500
DEF 300
Materials: 2 Level 4 monsters
You can only use the 2nd and 3rd effect of this card’s name each once per turn.
(1) This card with material is unaffected by Trap effects and by activated effects from any other monster with the same Type as any of those materials.
(2) You can detach 1 material from this card; add 1 “Traptrix” monster from your Deck to your hand.
(3) If a monster(s) that is owned by your opponent is sent to the GY, or banished, by card effect: You can attach 1 of them to this card as material.

Note: This card is named after Pinguicula, the scientific name of the Butterwort, a type of carnivorous plant in the family Lentibulariacaea that use their sticky glandular leaves to lure, trap and digest insects. SD45-JP002 Kino no Kowakuma (Traptrix Arachnocampa)
Level 4 EARTH Insect Effect Monster
ATK 1300
DEF 1500
You can only use the 1st effect of this card’s name once per turn.
(1) During the Main Phase, if you control a “Traptrix” monster (Quick Effect): You can Special Summon this card from your hand, also you cannot Special Summon monsters from the Extra Deck for the rest of this turn, except Insect and Plant monsters.
(2) Unaffected by the effects of “Hole” Normal Traps.
(3) The first time each Set card in your Spell & Trap Zone would be destroyed by card effect each turn, it is not destroyed.

Note: This card derives its name from Arachnocampa, a genus of fungus gnats with a bioluminescent larval stage that dwell in caves and grottos throughout Oceania. They use snares of made of silk threads around their next, to trap prey. SD45-JP027 Kyouwaku no Otoshiana (Delusion Trap Hole)
Normal Trap Card
You can only activate 1 card with this card’s name per turn.
(1) If your opponent Special Summoned a monster this turn: Target 1 monster they control with 2000 or more ATK; destroy it, then, if you have a “Hole” Normal Trap in your GY, you can banish 1 monster from your opponent’s GY. SD45-JPP02 Atypus no Kowakuma (Traptrix Atypus)
Link-3 EARTH Insect Link Effect Monster
ATK 1800
Link Arrows: Middle-Left, Middle-Right, Bottom-Center
Materials: 2+ monsters, including a Plant or Insect monster
(1) This Link Summoned card is unaffected by Trap effects.
(2) “Traptrix” monsters you control gain 1000 ATK while you have a Normal Trap in your GY.
(3) Once per turn: You can target face-up cards your opponent controls up to the number of Insect and Plant monsters you control; negate their effects (until the end of this turn), then you can banish 1 Normal Trap from your GY, and if you do, destroy 1 of the targeted face-up cards.

Note: This card is named after Atypus, a genus of atypical tarantulas known commonly as Purseweb Spiders, common through Eurasia