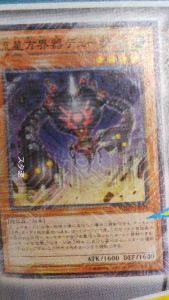 Ryuusei Houkai Ki Duja (Meteor {Houkai} Device Duja)
Level 4 LIGHT Machine-Type Effect Monster
ATK 1600
DEF 1600
(1) If this card is Normal or Special Summoned: You can send 1 “Houkai” card from your Deck to the Graveyard.
(2) Once per turn, during either player’s turn, if a monster was sent to your Graveyard during this turn: You can activate this effect; this card gains 200 ATK for each different monster in your Graveyard until the end of this turn.