Skip to content
Articles Cardobing Looking Ahead News
May 2, 2014May 2, 2014 NeoArkadia 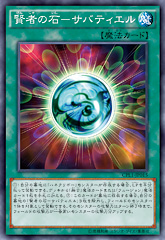 As well, during the second part, let’s introduce a card reprinted in “Structure Deck -HERO’s STRIKE-”!

“Sabatiel – The Philosopher’s Stone” is in “Collector’s Pack: Duelist of Legend”!

Sabatiel – The Philosopher’s Stone
(Normal Spell Card)
It’s incredibly powerful with its effect that adds a “Polymerization” or “Fusion” Spell Card from your Deck to your hand (except “Diffusion Wave-Motion”)! (However you need to have a “Winged Kuriboh” monster in your Graveyard and pay half your Life Points to activate it). Also, until the end of the turn, 1 monster on the field gains ATK equal to the ATK of the monster with the highest ATK on the field! (However to activate this effect, you need to banish 3 copies of this card from the Graveyard and target a monster on the field). It’ll turn the tide of battle for you things when the going gets really rough!

Foolish Burial
(Normal Spell Card)
It’s a Normal Spell Card that has the effect to send 1 Monster from the Deck to the Graveyard. These days, the number of Decks that don’t rely on the Gravveyard in some way is a very small number, making this an incredibly powerful Spell Card that can be used in a ton of Decks. Because as of May 2014, it’s a Limited Card, if you Duel in a game where Limit Regulations apply, you can only put 1 copy of this card in your Deck. What kind of combos will you try to pull off with this card? Think about all the combos you can pull off using this card, and then improve your skills at building a Deck!