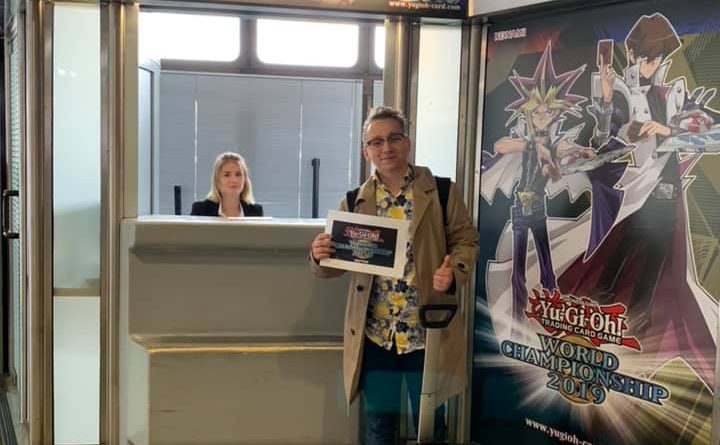 An article written by Raphael Neven

Hey everyone! Like the title suggests, this article is about ‘’ The Worlds Race ‘’ or competing for a spot for the World Championship Playoff. As the player with the most World Championship Qualifying Points of the most recent season, i think i can help you decide if you should go for the race next year by sharing my expierences from last season. I will also list all the regionals i have been to and which one of them are truly worth going to, so you can plan your race as efficient as possible.

I started ‘’the grind’’ very early in the season, even before KONAMI made the announcement that unlike the years before, players from countries outside the big 4 (Germany, Italy, France and the UK) could earn World Qualifying Points. The new system would be a top 8 playoff at the end of the season, rewarding the most consistent players of that season.

First off, i will list the events i have attended this season. Please note some of those have been outside of Europe and did not count for points, however i will explain later why these events have been important for my season nevertheless.

As you can see, i played almost every YCS worldwide this season, which of course isn’t needed in your worlds grind, but if you have the time i highly recommend it. Playing in all these different countries helps you become a lot better in a short amount of time. For me it felt a lot like vacation, while playing Regionals in Europe felt a lot like work. It was great to just play a YCS without having the stress, thinking about getting points. However you do have to look to your own schedule, taking rest and weekends off the worlds race is very important as well, as is the financial part.

The race is super expensive, especially if you have to fly to a lot of regionals. Be sure to prioritise your events. The attendance of a regional decides how many points you can win. For every 8 players there is 1 invite, and also 1 world qualifying point. So obviously, the bigger the regional, the more points you can get. To do the race as efficient as possible you have to go to the biggest regionals and ignore the smaller one’s. I often ignored the small Dutch Regionals in favour for a bigger one in the UK or Germany, because my competitors would do the same. Winning a regional in Holland would give me less points than placing 8th at a German Regional most of the time, and i would only attend a Dutch Regional if there was no other event that weekend.

I think that if you choose your regionals well, you don’t have to play as many Regionals as i did. Another crucial factor are your performances at European YCS events. In this season, both YCS Utrecht and YCS Dusseldorf were Top 64, which means there are even more points to be won. Without topping these huge YCS’s you might get into trouble and have to play a lot of Regionals to catch up , while if you consistently do well at YCS’s , you won’t have to travel all around Europe as much. Look at Joshua Schmidt or Dinh-Kha Bui, who compared to other players in the top 8 haven’t played as many regionals. For this season i don’t expect YCS Ghent and YCS London to be top 64, however these first YCS’s will be crucial for anyone interested in doing the race. It will filter out some players and could cause you to panic if you have not topped either of those. Of course it will be harder but keep in mind that some players in last years playoff also ‘’only’’ topped 2 European YCS’s, so there is always hope.

I started by making a spreadsheet of regionals , with how much it would cost me to go to, how long the drive would be or which airport i needed to go to and by asking friends in those area’s i made an estimate on how many people would attend. After i chose the regionals i would look up the emails of all the TO’s and register for every regional i was planning to go to. Make sure you are registered because nothing is worse than booking a flight for a regional and finding out it is capped while you havent registered. Most stores make a facebook event page and update those with information, while the official Konami website does not always have the correct information, as stores change dates, locations etc. so be sure to keep an eye out on Facebook for the correct information.

Another thing you can take away from my race is that it helps a lot to stick to 1 particular deck for as long as possible. As you see i used mostly the same decks for multiple regionals, and when i made a switch (Thunder Dragon at Leeds Regional) it ended badly for me. Because regionals only allow you to take 1-2 losses you can’t afford any risks by trying out new stuff, as you need the points. Darren reminded me time and time again when i was close to switching to another deck.

It won’t surprise you that the race is very expensive. It can differ depending on your location. If you live in Western Germany you might have an easier time getting to the big Regionals than the player living in Southern Europe. My location is pretty helpful. A 3-4 hour drive from most Regionals in Western Germany, a 2 hour drive from the Belgian Regionals and close to a big airport. Still, i spend thousands on flights, hotels, gas, so don’t underestimate the financial burden. You could argue that the prize card you get for making it to the playoff as well as the prizes you get for making it to the World Championship will cover part of your expenses, but it is not guaranteed

that you will make either of those, so be careful. Of course i played way more events than needed in the end, as well as YCS’s outside of Europe.

The mental and physical barriers

One of the things i found hard to cope with was motivating myself for regionals week after week. Especially after a regional didn’t go my way. I remember driving back home 6 hours after scrubbing the Karlsruhe Regional and rethinking if i wanted to continue with the race. It helped to keep the goal in mind, the playoff. Even though it looks very far away when you play regionals in October, which every leaderboard update i felt i got closer to my goal. I would try to always travel with friends to regionals, so if the tournament doesn’t go your way , you still have a good time and they help you focus on the next regional. Darren always helped me after a bad regional by saying that in his race he had bad weeks as well, and tried to tell me you just can’t top every regional, while i fanatically wanted to win them all.

The world’s race also is a massive attack on body. Imagine working on a friday, after work going to the airport, fly to Manchester, take a train to Sheffield, the next day play a regional, then on sunday go to Chesterfield, play another regional, then go back to Manchester, sleep at the airport for a few hours, take the first flight at 5:45 to Amsterdam, and then take a train directly to work. That is why i preferred 1 regional per weekend, however if you can do 2 in a weekend because the regionals are near each other, i always went to both. These weekends took a toll and at the end of the season i got sick after almost every trip. Of course this is different for everyone, hopefully you can take this better than i did.

After finally making the playoff after a long season, i had about a month to prepare for the crucial friday of the European Championship. Preparing for this event is very different from normal tournaments. You cannot really take any risks as it is single elimination, and you have to predict what the other 7 players are playing. I knew i was in pot 1 meaning i could not be paired with Nr 2, 3 and 4 in the first round. The matches in the playoff were the most stressful matches of Yu-Gi-Oh i have ever played, and i was so relieved when it was finally over.

Now the worlds point system is a work in progress, last season’s changes , mainly lifting the country lock are huge improvements. Making the top 8 play a playoff is a change i like, as if will encourage more players to try and make top 8, rather than being intimidated by the top player in their country, and feeling like they won’t have a chance even if they tried. However the system is far from perfect. Right now i feel like players who have more time and money to travel still have a huge advantage over the rest. Location also is crucial as i mentioned earlier, how long you have to travel to bigger regionals decides almost entirely if you even have a chance. I also don’t like that in theory someone could just play 30-35 regionals without topping the majority of the YCS’s still make it to the playoff. I understand that the entire point of the system is to push regional attendance, but a limit of regionals that count for your total of points could be a good suggestion. A friend of mine mentioned a system that would count the best X number of regionals you played in a season and counting only those points. So for example you can play 40 regionals but only your best results would count, therefore it doesn’t force everyone who wants to do the race to give up their entire life for a year.

Another change i think should be considered is the first round of the playoff being single-elimination. The entire point of the worlds point qualifying system is to base the worlds competitors on consistency of an entire season, rather than 1 crucial match in the top 8 of the European

Championship (or NAWCQ). By making the first round of the playoff single elimination you still have this 1 match-dependency which i really dislike. In a game like Yu-Gi-Oh double elimination for a playoff with stakes as high as Worlds seems appropriate, losing your entire season to 1 match is just horrifying.

I hope my experiences help you prepare for your worlds race, or at least make for an interesting read, it was hard work but for me, worth it in the end, and i am very tempted to go for it again, as qualifying for the World Championship is something every player should aim for!

Big shoutouts to all my friends who helped me with the race and pulling me trough this crazy season, i could not have done it without them.