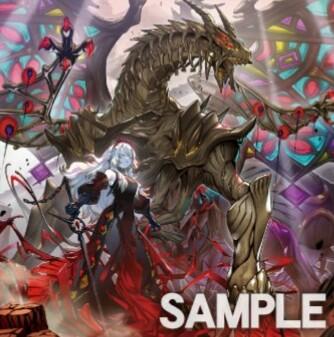 It’s time for a radiant, sparkling, explosive finale of doom and despair! 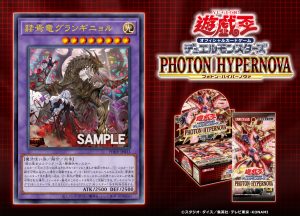 PHHY-JP033 Kakuenryuu Grand-Guignol (Grand-Guignol the Sparkling End Dragon) / Grand-Guignol the Finale Dragon
Level 8 LIGHT Spellcaster Fusion Effect Monster
ATK 2500
DEF 2500
Materials: “Blazing Cartesia, the Virtuous” + 1 LIGHT or DARK monster
You can only use the 1st and 2nd effect of this card’s name each once per turn.
(1) If this card is Fusion Summoned: You can send 1 Level 6 or higher LIGHT or DARK monster from your Deck or Extra Deck to the GY.
(2) If a monster(s) is Special Summoned by an opponent’s activated monster effect: You can banish this card from your field or GY; Special Summon 1 “Dogmatika” monster from the Deck or 1 “Despia” monster from your Extra Deck.

This card is named after “Le Théâtre du Grand-Guignol”, a Parisian theater well known from the 1897 to 1962, specializing in horror shows, not supernatural horror, but plays about things such as surgery gone wrong, insanity, hypnosis, dis-figuration, etc. It was considered a place where you went for experiences, not shows, and was considered extremely formative to the genre of horror.

The theatre’s name means “The Theater of the Grand Puppet”, taking its name from Guignol, a Punch-and-Judy esque puppet.