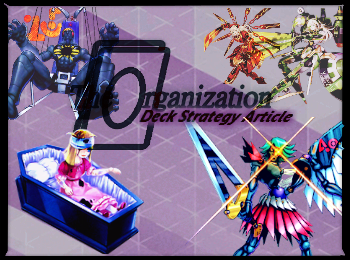 Since the new pack drops today in the TCG, it was only fitting to cover the Glorious Gimmick Puppet archetype! 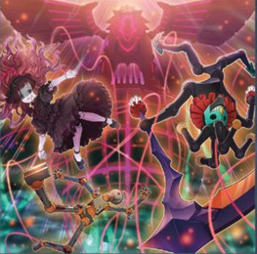 One of the first high-ranked archetypes to be released during the ZEXAL era, Gimmick Puppets have always had a neat combination of grind potential, power, and, to be frank, gimmicks. The entire theme benefits from being Machines, DARK, and a mixture of Level 8 Xyz fodder and Level 4 enablers. The theme had grind potential through all of the GY recursion available to the deck, it had power due to the Level 8 Xyz beaters, and it even had its own intheme win condition. So where did that leave the deck? Without solid consistency.

The first steps to resolving that came recently with Battles of Legend: Hero’s Revenge where Gimmick Puppet Chimera Doll made its appearance in the TCG. Link summoned out of two Machines, this card gave the theme both a way to get a Gimmick Puppet to the hand, then a second portion of that same effect to get a Gimmick Special Summoned out of the hand. This gives the deck an effective starter to begin duels, as well as multiple link arrows to work with during your turn. Chimera was only the beginning, as most of you probably inferred from the title, because the Gimmicks just received a massive boost to both consistency and their grind game – so let’s take a look at how this theme can shine in its own niche moving forward.

First things first, let’s talk about the best new card for the deck – Puppet Parade. At first, you may think this is totally slow for a trap and not worth running, but for once it is not a ‘win more’ trap card, it actually serves as an extra gear in your consistency engine. Even just getting one monster from it is worth it, as then you can use that on your next turn for plays. But if you can get more? Hello instant GY setup. Worst case scenario, just bring out Gimmick Puppet Shadow Feeler to protect yourself from attacks for the turn. The secondary benefit is that if you are behind by 2000 LP or more, you get to also set a Rank-Up Magic card from your deck. While the themes intended RUM is currently forbidden forevermore, that doesn’t mean that Rank-Up-Magic Numeron Force is a bad backup!

So if we are using RUM, what can we use it on? Well, Gimmick Puppets have three Number C monsters, but today we will only be focusing on the best – Number C40: Gimmick Puppet of Dark Strings. Before we get to him, let me touch on the two main boss Xyz monsters.

First, Number 15: Gimmick Puppet Giant Grinder lets you clear your opponent’s monsters out of the way with multiple targeted destructions. If your opponent happens to have an Xyz monster, they also take damage. Grinder is definitely a niche option in today’s game, but spot removal shouldn’t be instantly overlooked. The stronger and main boss monster for this theme is Number 40: Gimmick Puppet of Strings. With 3000 ATK, he is the monster to crush your opponent’s hopes and dreams. If the perfect situation arises, you can use his effect to spread String Counters to all other face-up monsters on the field, then follow that up with your Numeron Force. Dark Strings is brought out, all other face-up cards have their effects negated, then Dark Strings nukes the field, giving you a draw and your opponent some effect damage.

You may be thinking to yourself: “That combo seems rather inconsistent/lucky/dependant on getting out a R8/etc”. Before the last couple months you would have been right. But nowadays, the combination of the new support from LD5 and Chimera Doll makes this a much more consistent dream. Plus, you can always throw in a couple extra Xyz support cards to really get this Machine humming – let’s check out today’s build. 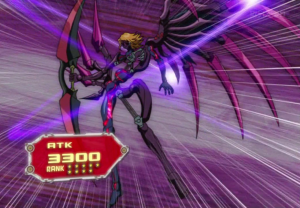 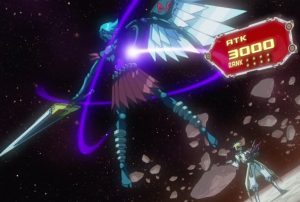 As you probably noticed, this build is fully streamlined around the portion of Gimmick Puppet that’s unique – their Xyz monsters. This archetype lives and breathes around getting them out consistently, so make sure you put all your effort into doing so! The other thing this build tries to strike a balance between is being able to go first yet also being able to go second. Whichever way the dice roll lands, you need to be able to get a Chimera Doll to the field as quickly as possible, and that’s where the Sky Striker engine comes in, as Hornet Drones or Engage is a free Chimera off the bat (Drones -> Kagari (recycles Drones) -> Kaina -> Drones (gain 100 LP) -> Hayate -> Chimera). If you don’t start with either piece of the Striker engine, you can rely on Gimmick Puppet Humpty Dumpty, or worst case scenario, Bisque Doll. Either way, starting with Chimera helps you get to your first Strings. Chimera also gets that all-important first Gimmick Puppet Dreary Doll into play, as its recursion is pivotal to the rest of your duel.

For the rest of the techs, the strategy is filled to the brim with ways to keep bringing back your Strings and Dark Strings. If you didn’t notice – Dark Strings activates anytime it is Special Summoned. So, if you keep managing to recycle him to the field, you can burn through your opponent’s board multiple times if need be. Glorious Numbers, another card recently released in Hero’s Revenge, brings back one of your fallen Numbers and lets you draw a card. Combine this with Dark Strings for two draws! Or Xyz Reborn for shenanigans during the opponent’s turn. Or just rely on the tried yet true Junk Puppet or Gimmick Puppet Terror Baby, both of which are just general Gimmick Puppet GY recovery options.

The last piece I want to highlight about Gimmick Puppet is that they are a combo theme that is surprisingly resilient to disruption. Unlike some of my other recent articles, it isn’t because they can keep going if disrupted. Rather, they have ways to ignore the disruption itself. The GY effects of Terror Baby and Gimmick Puppet Bisque Doll make your Gimmicks untargetable and Gimmick activations unable to be chained to for the turn. This lets you go ham ignoring Veiler, Hieratic Seal, Ash, Ogre and more. Plus, the field-wide negation offered by Numeron Force is nothing to scoff at if you do go for a big play. Remember, that negation lasts for the rest of the duel! It really is a big play for you to take advantage of.

What NOT to Run:

The other piece of the above decklist that I highly recommend is a suite of cards NOT to run in this deck. I’m calling this out in particular here, just because there are so many bad options that many duelists online have been trying ever since LD5 support was confirmed. To be clear, there are a lot of things old Gimmick Puppet needed that new Gimmick Puppet no longer needs to rely upon!

First, we have Gimmick Puppet Des Troy. You do not need to be running a -1 anymore to get Gimmick Puppets out of the hand. Chimera Doll and Humpty fill that role well enough, but Bisque can also do so in a pinch. In the past, he might have been needed, but this is modern YGO – Seriously don’t use him! Next, Gimmick Puppet Egg Head. This monster, able to shift from Level 4 to Level 8 with a discard seems to have promise, but it is now entirely outclassed by Perform Puppet. Which itself isn’t all that good either, but good enough to warrant one slot in the decklist. The next advice I have is to ignore some of the ‘Gimmicks’ from the past. Black Salvo is not worth your time in here, so I really don’t want to see that out and about again. Machina Fortress? Inferno Reckless Summon? These may be an archetype of discarded toys, but I beg you not to turn these reckless options.

You should be aware by now, but I am going to be extra blunt just to be make sure that you understand: This strategy is no longer just another Rank 8 Xyz Spam archetype. In the past, that is probably a fair statement. But with the sheer power of their new link and new support, they really seem to have edged out Raidraptor as the premiere Rank-Up archetype, so focus on that positive niche to make your impact with this theme! With that in mind, let’s dive into tech options for modern Gimmick Puppet.

Let’s turn to talking about some other ways you can enhance the Gimmicky playstyle that this theme brings to a duel!

Gimmick Puppets can pull your opponents strings the entire duel, going for an surprise power move packing some serious punch out of nowhere. The release of LD5 and BLHR really brought this theme back into the modern game, giving it the power and grind game it needed to pull itself back up onto its own two feet. So hopefully you give this deck a shot – personally I think it is the most promising of the LD5 themes this time around, even though some others may be a tad more splashable. Also, for the rarity nerds out there, did you notice that you can get almost all of these cards in blinged out gold rarity? Bling or not, hope you all enjoyed this article, thanks for reading, and see you next time!

Reminder, I also take suggestions for future CDS articles! I really want to see some input from you! Fun fact, this article was specifically requested by a reader through Discord! If you wish to see a CDS article about the archetype, theme, or strategy you love, feel free to private message me on the YGOrg Discord server, the YGOrganization Forums, or just post a comment in response to this article on our Facebook page with your ideas to keep under consideration. On most YGO-related communities my username is Quincymccoy, so feel free to reach out.