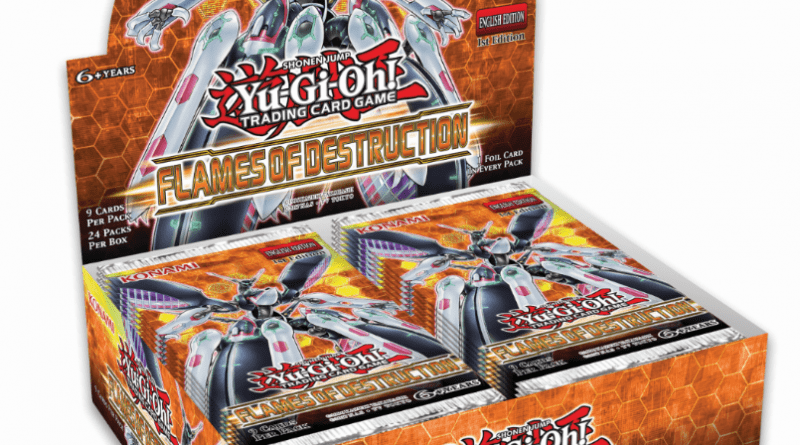 Including some brief wink wink teasers of the effects of cards in the set. 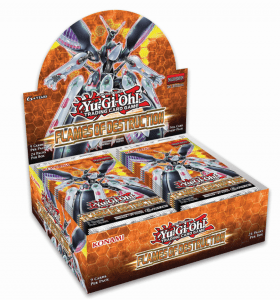 Flames of Destruction, available starting Friday, May 4, is a 100-card booster set that will feature new cards for established Deck themes, a brand-new Link Monster theme that can be played as its own Deck or spliced into existing strategies, the return of the Elemental Lords and more.

The Flames of Destruction booster set contains 100 cards, including:

Flames of Destruction closes out the first Dueling season of the Yu-Gi-Oh! VRAINS era with a bang! This 100-card booster set will shake things up with new cards for established Deck themes, a brand-new Link Monster theme that can be played as its own Deck or spliced into existing strategies, the return of the Elemental Lords, and more!

Ib the World Chalice Priestess, known for her protective abilities, turns to the dark side and lays waste to her world with 6 incarnations of destruction! These new Link Monsters have flexible Link Materials that let you use them in any Deck, and each one has two abilities: one that you use when you Link Summon the monster and one that’s always active. These powers range from retrieving any Spell or Trap Card from your Graveyard to changing the number of cards you get to draw each turn. With some strategic card placement, you could be drawing up to 6 cards at the start of your turn instead of just 1!

To make the most of these abilities, you’ll want to keep your Link Monsters co-linked. If you do, you’ll get a refund on the cost of the new monsters’ one-shot abilities and their always-on powers will grow much stronger! Try combining these monsters with cards like Tri-Gate Wizard from Structure Deck: Cyberse Link or Firewall Dragon from Code of the Duelist to gain even more from co-linking your monsters.

For over 5 years, the four Elemental Lords have stood alone as keepers of some of the strongest effects allowed in Dueling. In Flames of Destruction, the fifth Elemental Lord finally arrives, along with the monsters tasked to guard their great powers from those who would misuse them! The newest Elemental Lord can only be Summoned while you have exactly 5 LIGHT monsters in your Graveyard and commands the power of Raigeki – the power to destroy all enemy monsters at once! This Elemental Lord is a great fit in Decks built using the LIGHT monsters from Structure Deck: Wave of Light.

On top of all that, Flames of Destruction is full of cards that are useful in any Deck and cards that elevate popular themes to new heights! You could find…