(Duelist News is Cardobing under a new name) 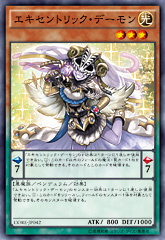 Pendulum Effect:
You can only use the Pendulum Effect of “Eccentric Archfiend” once per turn. (1) You can target 1 other Spell/Trap card on the field; destroy both this card and that card.

Now, what cards will you use this card with?

This card is a handy dandy card that can destroy an opponent’s strong monsters or it can destroy a troublesome Spell or Trap your opponent is using! Also, this card can destroy your Monsters, and your own Spells and Traps, which means you can use this card to set up combos of cards that activate in the wake of being sent to the Graveyard, or it’s useful if you need to place different Pendulum Monsters in your Pendulum Zone! By the way, you can add this card to your hand with effect of “Archfiend Heiress” (※)!
(※ It has an effect that if it’s sent to the Graveyard by a card effect or destroyed by battle, you can add 1 “Archfiend” card to your hand.)

Let yourself consider the various possibilities and ways you can use this card.

Clash of Rebellions (April 25th, 2015)
The “Odd-Eyes Rebellion Dragon” called forth by Yuya when he was overtaken by his anger has appeared! The pack also includes cards used by his rivals, such as “D/D” monsters, “Raidraptors” and “Entermages”, but the pack also contains cards that bolster existing Series! What the, even “Red-Eyes” is getting even stronger! And also, new Series appear! With the “Igknights” who fight via Pendulum Summoning or the “Aromages” who perform combos in conjunction with gaining LP, Duels get even more exciting! [To the Product Page]