“Quantum Cat” (Included in EP15): A Continuous Trap Card that can be a monster of whatever Type or Attribute you desire!

Extra Pack 2015 (EP15) which goes on sale September 19th, 2015, has a Continuous Trap Card that can become a monster of whatever Type and Attribute you need! It can become a Level 4 Normal Monster with 2200 Defense, that can play an important role by being used for a Rank 4 Xyz Summon, Tributed for a Tribute Summon and can even be used as Material for a Fusion or Synchro Summon! 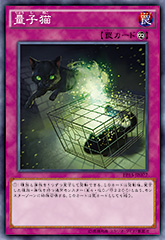 Noteworthy Points When It’s A Monster
Level 4
⇒ It can be used for a Rank 4 Xyz Summon!

Declare whatever Type and Attribute you need
⇒ It’s fantastic support for Fusion, Synchro or Xyz Summons that need a monster of a specific Type or Attribute!
⇒ It can be used as a Tribute for a Tribute Summon!

Its DEF is 2200
⇒ With high DEF, it’s difficult to destroy in battle!

So, what kind of Monster will you turn this card into?
You can easily use it for “Baxia, Brightness of the Yang Zing” and “Michael, the Arch-Lightsworn” which are both Synchro Monsters with powerful abilities, or the Special Summon of the powerful Fusion Monster “Beast-Eyes Pendulum Dragon“! And even combine it with monsters who requires specific monsters of certain Types and Attributes for the purpose of a Tribute Summon, such as “Sky Scourge Invicil“.
… … So how will you use it?

Extra Pack 2015 [On Sale September 19th, 2015]
The Extra Pack for 2015 has appeared, and it comes with cards from overseas! It’s the largest pack of the series yet, with a total of 79 different cards! It has the “Burning Abyss” Series, which tells the story of the travels through Hell, the “U.A.” (Ultra Athlete) Series which consists of athletes from the near future, also you can also get started with the “Old Entity” cards who are terror incarnate that defies description, and it also even includes the two Prize cards from the World Championship 2014 World Tournament as special luxury cards! And it even includes support cards that can strengthen all sorts of Decks! [ To The Product Page ]