Choose a duel runner to select which EX skills your will use for your deck. Changes this time around include adding Kallen Kessler to the list of Playable Duel Runners. Kallens Duel Runner is ment for a more Earthbound Immortal approach as the effects pertain to Earthbound Immortals. Changes also include rebalancing the counters required for some speed spells. 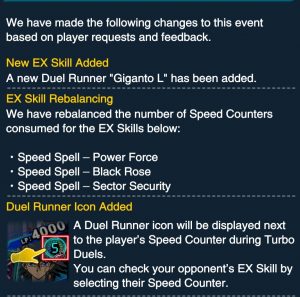