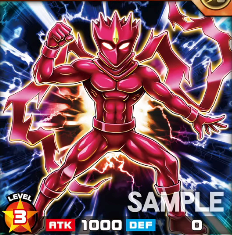 On the other side… is another you. 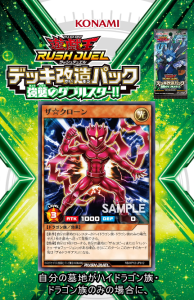 RD/KP12-JP012 ザ☆クローン The☆Clone (The Clone)
Level 3 LIGHT Dragon Effect Monster
ATK 1000
DEF 0
[REQUIREMENT] If the only monsters in your GY are High Dragon or Dragon monsters, you can activate this by sending 1 card from the hand to the GY.
[EFFECT] Draw 1 card. If there is a “The Copy” or “Back To The Fusion” in your GY, also during this turn, this card’s name is treated as “The Dragias”

Note: The official localizations for Luke & Lugh’s The☆ cards remove the ☆, apparently. A tragedy of our life times, to be honest. 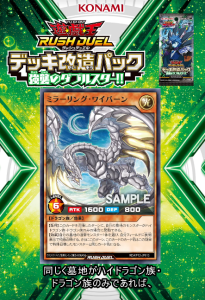 RD/KP12-JP013 ミラーリング・ワイバーン Mirroring Wyvern
Level 6 LIGHT Dragon Effect Monster
ATK 1600
DEF 800
[REQUIREMENT] During the turn this card is Normal Summoned, if the only monsters in your GY are High Dragon or Dragon monsters, you can activate this.
[EFFECT] Choose 1 Normal Monster in your GY and Special Summon it to your field face-up. And, during this turn, this card’s card name is the same as the monster Special Summoned by this effect.