She’s a Swap Frog-esque monster from the game’s most famous Winged-Beast-Type archetype. This card’s printing in Japan facilitated judicious use of Elemental Hero Stratos, thus bringing a new FTK to the OCG. Said FTK led to the OCG-side Limitation of Divine Wind of Mist Valley. Stratos is Forbidden here in the TCG, and the TCG didn’t have Dancer until now, so it didn’t Limit Divine Wind.

So what does this mean for us?

It means we can still make a fast profit-generating machine of a deck, even without Stratos backing us up, and we’ll do it through using one of the game’s most underused Synchros of all time: 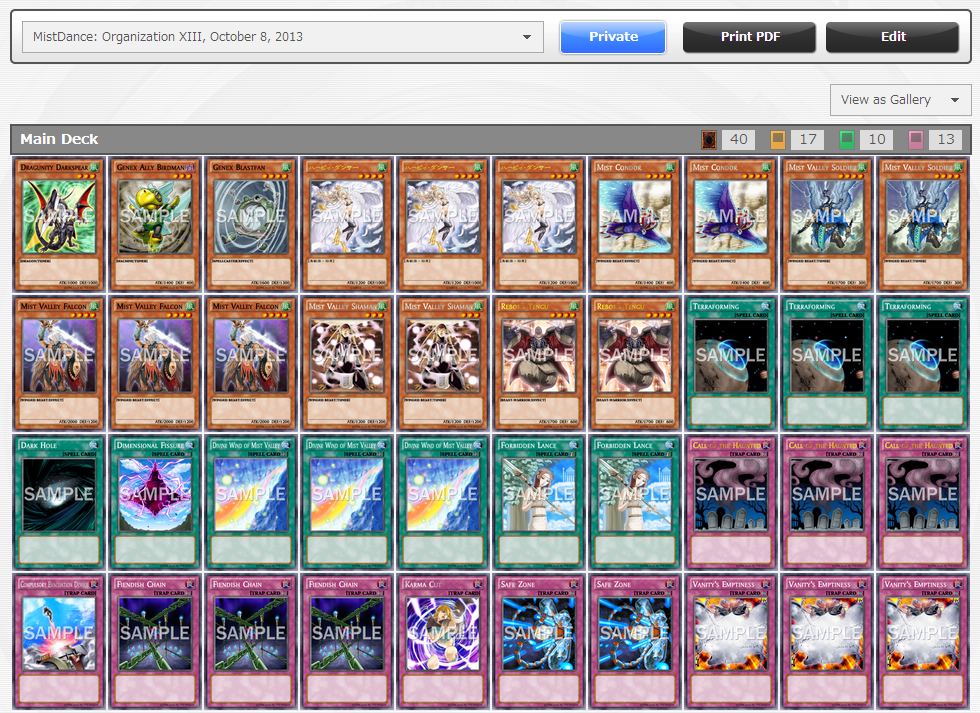 The above photographs are a draft of the deck I’ve put together, using KONAMI’s own Card Database.

It is by no means an optimal or finalized build, merely a starting point to serve as proof-of-concept. Let’s go over the choices.

Dragunity Darkspear
Darkspear is a Tuner that also serves as a pseudo-Monster Reborn to revive nearly every monster in the Main Deck, especially Mist Valley Falcon. Falcon, means of accessing Falcon, and means of Summoning Thunder Lord are all essential, and this card serves as support to all those concerns.

An old friend of mine, Sam Lefevre, and I built this deck a while back when we first got news of Dancer’s printing in Japan. Birdman was Unlimited at the time, and the combos were just relentless. Despite the Limit, the single Birdman is beyond merely being “worth running” – its synergy is incomparable, via means of triggering Divine Wind and Summoning Thunder Lord.

Genex Blastfan
This unlikely featherless friend is our next teammate today: it’s a Spellcaster-Type WIND monster poised to recruit Birdman for you. All you need to do is Special Summon it, and Special Summoning is all this deck does while Divine Wind is in play!

Ensure Divine Wind is present. Summon Dancer, then activate Dancer’s effect. Return Dancer to your hand, then Normal Summon any WIND monster from your hand – let’s presume you Normal Summon the Dancer you returned.

Because you returned Dancer to your hand, you’ve triggered Divine Wind, and it will activate after Dancer resolves – so, Summon Blastfan from your Deck via Divine Wind, then recruit Birdman.

You’ve grabbed two free cards so far, and we’re not done: Activate and Summon Birdman by returning that same Dancer again, then tune it with Blastfan to Summon Arcanite Magician, Ancient Fairy Dragon, or Black Rose Dragon. When Birdman was Unlimited, these plays would fill fields with Dracossacks.

Harpie Dancer
As the card whose release made this deck possible, Dancer lets you trigger Divine Wind without truly losing any field presence. She also allows you to make use of the cards Special Summoned from your deck in various other ways, for a 2nd Normal Summon to set up other plays. 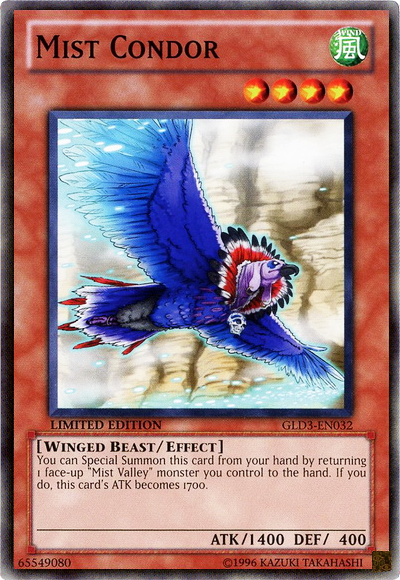 Mist Condor
This sleeper is very similar to Birdman. Return a “Mist Valley” monster to your hand, Special Summon it, and it gets an ATK boost while also triggering Divine Wind – or, rarely, it will itself be what Divine Wind calls on for you. There is nothing wrong with another Level 4 WIND monster in the deck. However, since it is only a “Mist” monster, and not an actual “Mist Valley” monster, it cannot be used to Summon Thunder Lord. Keep that in mind.

Mist Valley Soldier
It’s another Level 4 monster, another WIND monster, another “Mist Valley” monster, another Tuner; this card’s synergy is off the charts. Mostly used for Rank 4 and Level 8 Synchro plays, this card also is good at removing problems Hyper Hammerhead style. Try Synchro Summoning Stardust Dragon or Scrap Dragon, or consider Xyz Summoning any of your Rank 4 monsters, including the super-powerful Lightning Chidori.

Mist Valley Falcon
Where Divine Wind is the deck’s body, and Dancer is its heart, Falcon is its soul.

Many have built decks based on Falcon before, but never has it been so accessible, so fast, and so powerful. Boasting a mighty 2000 ATK, each of its attacks will threaten your opponent in two or three ways: Falcon doesn’t just win fights, he re-primes your Continuous Traps, and he triggers Divine Wind. Being a “Mist Valley” non-Tuner also makes this card essential for Summoning Thunder Lord.

Mist Valley Shaman
As another Level 3 Tuner, Shaman helps set up a majority of our plays. Many things you can do with her are pretty cool, but she’s ultimately here just by being a synergistic Tuner.

Reborn Tengu
Although Semi-Limited, this card still screams synergy and profit, both by self-replacement and by Divine Wind Summons.

Terraforming
You don’t get to play the game unless Divine Wind is present. This card makes it be present sooner.

Dark Hole and Dimensional Fissure also need no introductions. I should hope that Forbidden Lance doesn’t either. 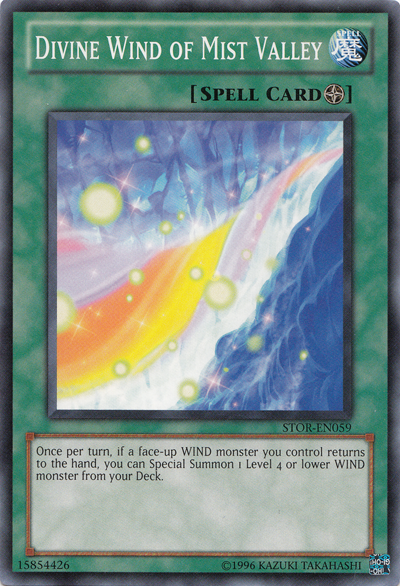 Divine Wind of Mist Valley
This Field Spell turns half the deck into Inzektor Dragonfly. With it, the wind is at your back: without it, you’re dead in the water. There is sincerely nothing more to be said about it.

Karma Cut and Compulsory Evacuation Device are simple spot removal. They aren’t the stars of the Trap lineup in any sense.

These other ones are, and it’s here where you’ll see the gameplan really soar. 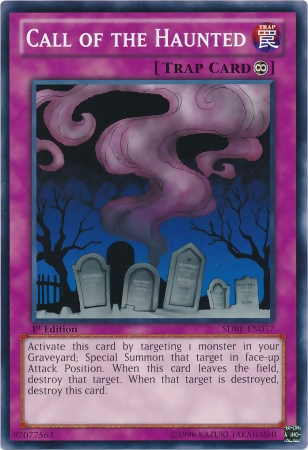 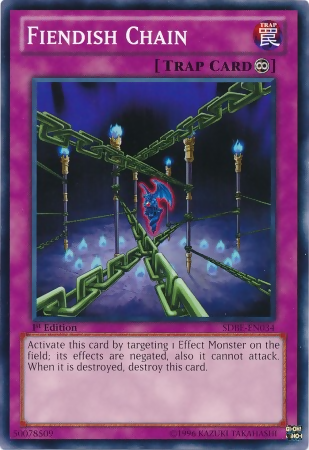 These traps are Continuous. They stay on the field. Each serves a unique and powerful purpose used to control and win the game. And thanks to Falcon and Thunder Lord, they’re going to put in a lot more work.

Call of the Haunted revives your monsters, Fiendish Chain stops theirs, Safe Zone either protects your monster or destroys theirs, and Vanity’s Emptiness turns their best shots at winning into pure nothingness.

And, in this deck, you turn them on and off at will.

Minefieldriller is the only card in the Side Deck worth noting. I’m only naming it so people know what it is. You can choose to read it on your own if you care.

The Extra Deck also has a lot of obvious choices, but a different choice is also the biggest, most fearsome, and least known choice – it’s our deck’s boss monster, Thunder Lord himself, the most underused and under-appreciated Synchro in the game’s history. He’s eager to beat up on someone. Let’s make that someone your opponent.

1 Tuner + 1 or more non-Tuner “Mist Valley” monsters
Once per turn, you can select 1 card you control. Return it to the hand, and this card gains 500 ATK until the End Phase. This effect can be activated during either player’s turn.

We’ll be calling on Falcon and Shaman/Birdman to Summon this guy.

You’ll notice that his effect text begins with the phrase ‘once per turn’ at the start, but don’t be fooled: this card’s text predates the creation of Problem-Solving Card Text, so we need to read the whole text to know how any single portion of the text works.

Now, since this effect is Spell Speed 2, and also an effect that has Thunder Lord gain ATK, you’ll notice two things in particular:

But why should we care?

Well, for starters, it means that you can use it to return monsters back to your hand that your opponent targets with something like Number 11: Big Eye. This is only the beginning, though.

You can also return your Spell/Trap Cards, and that’s where things get better.

A simple defensive ploy would call for you to return Divine Wind to your hand during your End Phase, to keep it safe from your opponent’s cards and ripe for reuse next turn: your Spellbook-wielding opponent is welcome to play The Grand Spellbook Tower as often as he likes, we’ll just blow it away by replaying Divine Wind. And if he doesn’t ever play his Tower, then that’s just fantastic for us anyway.

But let’s imagine something more sinister. During their turn, use Fiendish on their monster, then during the End Phase, return it to your hand and simply re-Set it during your next turn. That Spellbook friend of ours depends upon his Spellbook Magician of Prophecy… he had better have something to deal with Fiendish, otherwise their Magicians are now pointless. I hope he likes burning his Spellbook of Wisdom. Then again, that might not be wise to burn it so soon, when we’ve got a Zone ready to eat up a more important monster. Decisions, decisions…

Keep in mind, perhaps the most devastating play we have involves returning Zone to our hand.

Imagine this. It’s your turn, you’ve used Dancer and Divine Wind to bring out Falcon, put Birdman or Shaman in play, and Synchro for Thunder Lord. You set Emptiness and Zone. Return your Divine Wind to your hand (no reason not to), and end your turn.

So they draw their cards, and Emptiness comes by to ruin their “Plan A”. Now they’re stuck with “Plan B” – all they can do now is Normal Summon. They conduct their Normal Summon, do a few little tricks possibly, and maybe even try to attack you, but sooner or later, you flip over Zone and put it on their monster. Then you return it to your hand with Thunder Lord. Their monster is destroyed. They cannot Special Summon, and Emptiness is safe and sound. When your turn comes, simply re-Set the Zone and do whatever else you want to do: you can even return the Emptiness to your hand and go off with Divine Wind again, then re-Set the Emptiness.

It’s like Jowgen and Fate all over again. Miss Heavy Storm yet?

There’s dozens of other cool combos to use with Thunder Lord, as well as the rest of the deck, but we’re fresh out of time tonight. I hope you enjoyed the read, and I hope you give the deck a shot, as it’s legal in only 3 days (as of this article’s publication) when “Legendary Collection 4: Joey’s World” hits the store shelves.

Until we meet again, play hard, play fair, and most importantly, have fun.