A website with a manual for the playtesting for the upcoming videogame, Yu-Gi-Oh! Cross duel, has been created.

What is Cross Duel?
-Opponents:

Cross Duel is a Duel between 4 players. Expect a strategic, new type of Duel!

-Conditions to finish the Duel:

Each player has their own LP (Life Points). When any player’s LP reach 0, or after 8 turns have passed, the Duel ends.

When the Duel ends, the player ranking is determined by how high their LP is.
Aim to keep your LP high in order to obtain the 1st place!

Regarding Turns
-Turns:
Turns have a “Main Phase” and a “Battle Phase”. Players conduct their Main Phases and Battle Phases at the same time.

Start by drawing 1 card, then place Monster Cards and Trap Cards on your field.

During the Battle Phase, start by activating the skills of monsters.
After the players finish Summoning the monsters and the Battle Phase begins, Spell Cards can be used.
You’ll have to decide whether to use Spell Cards or not within the time limit while checking what the field and the hands look like. After the time limit, the monsters will move.

(Note: the skill in this Blue-Eyes reads: “[Awakened skill]: 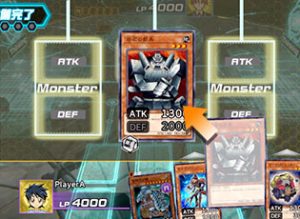 By sliding the “ATK” part of the Monster Card, it will be placed on the field vertically, Summoned in face-up Attack Position. 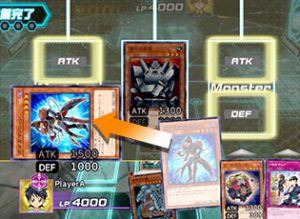 By sliding the “DEF” part of the Monster Card, it will be placed on the field horizontally, Summoned in face-up Defense Position.

IMPORTANT: You can place a maximum of 3 monsters at the same time.

Monsters in Attack Position will aim for different opponents depending on the Zone in which they are Summoned, divided in 3 different directions. You’ll need to think about which opponent you wish to attack and decide in which Zone you will Summon the monster accordingly.

[Main Phase] How to use Trap Cards
-Using Trap Cards

After the time limit to choose Spell Cards ends, Attack Position monsters will move according to their lanes.

Monsters that don’t have a skill that alters their movement ability will move halfway through a lane in a single move, and will arrive to the opponent’s field during the next turn.

Monsters that have their ATK or DEF lowered by battles keep those values afterwards. Even if you are pressured by a high ATK monster, don’t give up and turn the tables around by combining the ATK of multiple monsters!

-Direct attacks
Monsters that arrive to an opponent’s field when it’s empty will attack that opponent directly. Monsters that attack directly will inflict their ATK value as damage ot the opponent and recover your LP by the damage inflicted.

*There is a maximum of 8000 LP, it will not increase any higher than this value.

In order to win Duels, the skills that you set in your monsters are key.

Yami Yugi’s Ace Monster
Dark Magician
Special Skill: Each time a Spell Card is activated, inflict damage to all other players. Make sure to maximize your use of Spell Cards!

Jaden/Juudai Yuki’s Ace Monster
Elemental HERO Neos
Special Skill: Even if it is destroyed in battle, it returns to the hand. After returning to the hand, the number of Summoning Materials is reduced and its Movement Ability is increased!

Yusei Fudo’s Ace Monster
Stardust Dragon
Special Skill: Even if your low Level monsters are destroyed, they return to the hand. Make sure to Summon lots of monsters and attack with lots of them!

Yuma Tsukumo’s Ace Monster
Number 39: Utopia
Special Skill: The more of your opponents’ monsters it defeats, the more its power to reduce the ATK of the battling monsters increases. Make your opponents change to Attack Position and attack them one after the other.

Ace Monsters have Ultra Rare Monster Skills with very powerful effects! Make sure to Summon them and grasp victory!

1 Ace monster is included per Deck and they always appear in your starting hand.

As a side note, a trailer voiced by Seto Kaiba’s voice actor, Kenjiro Tsuda, also premiered during the stream but so far it hasn’t been uploaded individually. It basically features all of this information but the visuals make it much easier to understand. 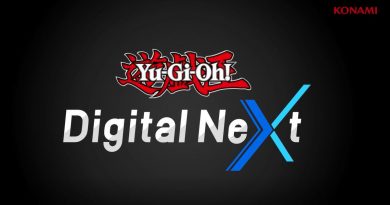