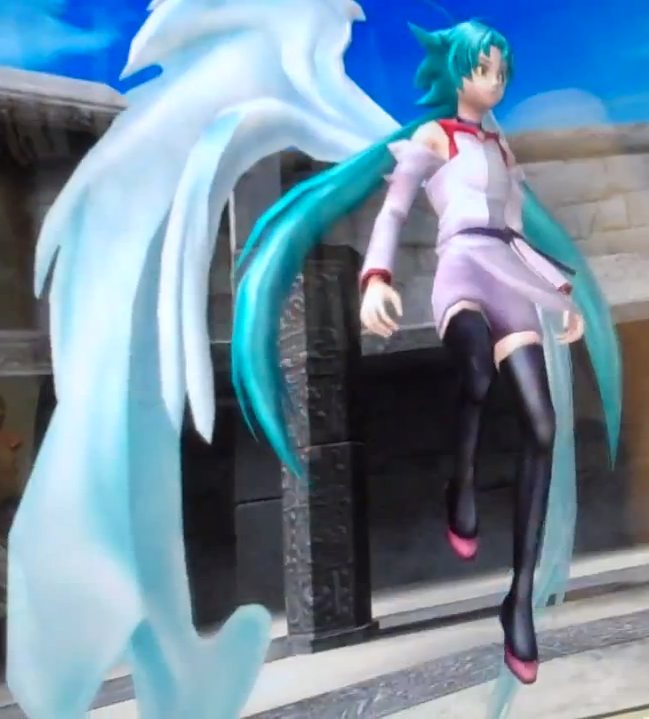 If you go to yugioh.wikia.com you’re sure to find thousands of pages, each dedicated to one specific card. Each card has an associated rulings page, and each associated rulings page always seems to have two rules. You either can or can’t use a card during the Damage Step, and the card either does or doesn’t “target.”

This is because in the OCG they don’t have PSCT, and before having it, knowing if a card targeted sometimes even came right down to word of mouth. Nowadays, PSCT makes it easy to see if a card targets; it literally will say “Target 1 X;”.

But PSCT also tells us one more thing, and that’s how to resolve the card, and how it will affect its target….if it can at all.

“During your opponent’s Main Phase, you can send this card from your hand to the Graveyard to select 1 face-up Effect Monster your opponent controls. Negate the effect(s) of that monster until the End Phase.” This is the original text of the card “Effect Veiler”. You can see it used the word “select”. This card text pre-dates PSCT, but it still told us that it targeted. What does it do to that target? Negates the effects of it until the end of the turn.

So what happens if the target is lost? In Yu-Gi-Oh!, a targeted card must remain exactly the same way it was when first targeted, in order for the targeting effect to resolve. That is, unless the card says otherwise. This is not clear on the original text of Effect Veiler, but let’s take a closer look at the PSCT version of the card. 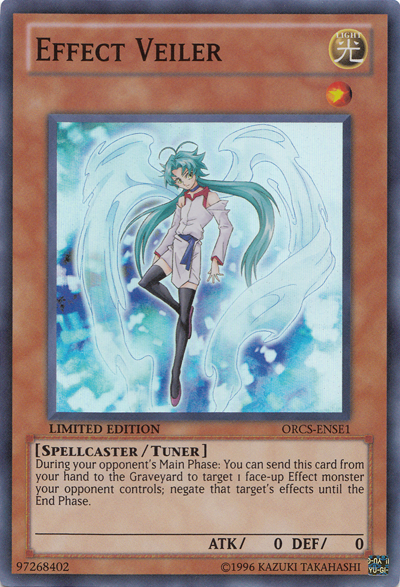 “During your opponent’s Main Phase: You can send this card from your hand to the Graveyard to target 1 face-up Effect Monster your opponent controls; negate that target’s effects until the End Phase.”

Seems pretty good. We can tell when to use it, as that comes before a colon “During your opponent’s Main Phase:” and since the next part is before a semi-colon, we can tell it happens at activation, and is a cost, to send (not discard) it from your hand to the Graveyard (so if it would be banished, it couldn’t be used) to target 1 face-up Effect Monster that your opponent controls. It says that we negate “that target’s” effects until the End Phase.

So what can we infer from this?

When the resolution text (that is, the part after the semi-colon) says “that target”, it means the point in the game when you are resolving the card. You go back and check the targeting conditions again: “1 face-up Effect monster your opponent controls”. If this is no longer true, then “Effect Veiler” will fail! This is why if you chain Book of Moon to Effect Veiler, and flip your monster into face-down Defense Position, Effect Veiler will fail; it’s no longer 1 “face-up” Effect Monster that you control. 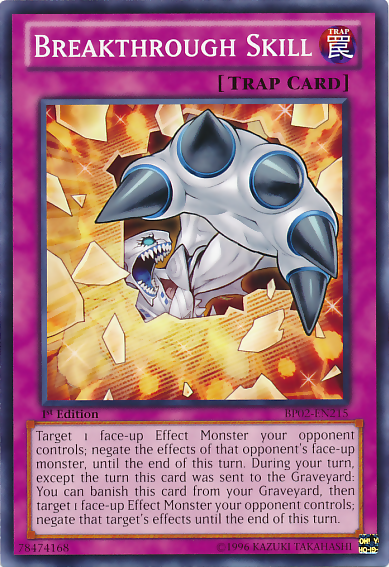 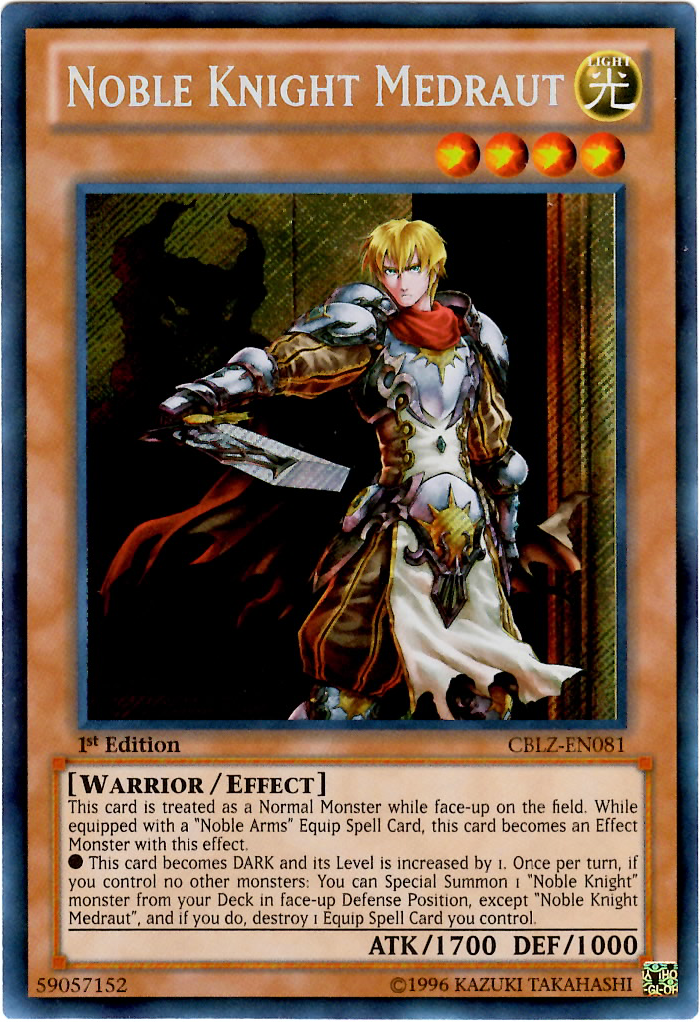 Enter Noble Knight Medraut. The first of the new “Noble Knight” monsters to have the unique effect of being a Normal Monster, and becoming an Effect Monster wielding a “Noble Arms” Equip Spell Card. Geminis work similar to this, identical in fact, when using Supervise, but let’s focus on the Noble Knights for now.
Medraut’s text says: “This card is treated as a Normal Monster while face-up on the field. While equipped with a “Noble Arms” Equip Spell Card, this card becomes an Effect Monster with this effect.
● This card becomes DARK and its Level is increased by 1. Once per turn, if you control no other monsters: You can Special Summon 1 “Noble Knight” monster from your Deck in face-up Defense Position, except “Noble Knight Medraut”, and if you do, destroy 1 Equip Spell Card you control.” Needless to say, he is really good.
Let’s not worry however, about his amazing effect and instead se how he’s relevant to what we’ve learned today.
Medraut is awesome in that he is only treated as an Effect Monster while he has an Equip Spell Card on him. If you go back and look at the targeting conditions for Breakthrough Skill and Effect Veiler, you’ll notice that not only does the target have to be face-up, and under your opponent’s control, but it has to be an Effect Monster. Medraut here is an example of when a monster can no longer be, well, an Effect Monster! 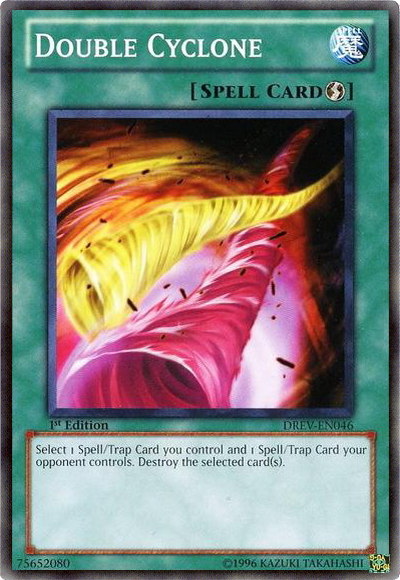 With cards like the super popular Mystical Space Typhoon or Double Cyclone, you can destroy the Equip Spell Medraut carries, to return him to Normal Monster status. His effect to Special Summon will even still resolve! This cool little maneuver allows our new Knights of the Round Table such as “Borz”, “Gwalchavad”, and “Medraut” to dodge the negating effects of Veiler, as well as the second effect of Breakthrough Skill! However, as we noticed, the first effect of Breakthrough Skill simply says 1 face-up monster your opponent controls. It will still negate the Noble Knights here, where the other card effects in the game will fail. This means you can activate the effect of Noble Knight Medraut, They can send Effect Veiler to the Graveyard and you can chain Double Cyclone to destroy the Equip, as well as one of their S/T cards! Not only will your Noble Knight resolve his effect, but the destroyed Equip Card will then activate and re-equip itself to one of your new monsters, their “Effect Veiler” will have accomplished nothing, AND you got to destroy one of their Spell/Trap Cards to top it off!

Noble Knights are a really cool deck, and knowing how targeting works and when a card doesn’t target (…looking at you Memory of an Adversary/Spellbook of Fate) can really change the outcome of your Duels. I hope this information helps and that you learned something from this article. I look forward to writing another one soon, but until then, be sure to have fun.