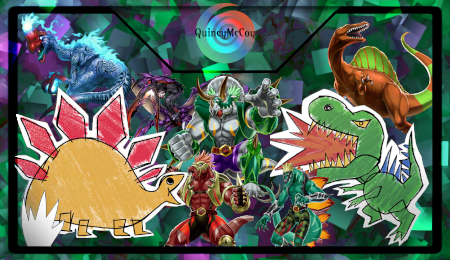 I may not be a real artist, but I do love to Doodle…

Welcome back to a ferocious profile, this time centered around Dinosaurs and giving the new Doodle series a chance to shine in their own spotlight. The Doodle theme is very small at the moment, just two monsters and a Trap, but they might have a place as additional tech options in more standard Dinosaur decks moving forward. Doodle Beast – Tyranno (YGOrg Translation) is the theme’s stronger monster, able to Tribute Summon itself via Quick Effect during the Main Phase. Even though it’s a Level 8 monster, it only needs 1 tribute if you use a Dinosaur monster, but whenever you Normal Summon it, it destroys 1 monster on the field. The other Doodle Beast is Doodle Beast – Stego (YGOrg Translation), a Level 5 that can Special Summon itself from the hand if you control no monsters or only Dinosaurs. When summoned, it tutors their one support card, Doodlebook – Uh uh uh! (YGOrg Translation), from the deck, then sends 1 card from the hand to the GY. Oftentimes, you will want to send that tutored Doodlebook, as it has a GY effect to banish itself to tutor any Level 5 or higher Dinosaur, such as your Tyranno for the following turn.

But these are the only cool dinos in town, because the Dinowrestlers are also making an appearance. While this theme is largely unusable in a pure form, the Dinowrestler archetype has some real neat gems of cards, such as Dinowrestler Pankratops, which can tribute a Dinowrestler to destroy a card as a Quick Effect, or Dinowrestler Systegosaur, which tutors a Dinowrestler or World Dino Wrestling whenever it is Special Summoned. Speaking of World Dino Wrestling, this Field Spell is primarily useful for its GY effect, which lets you banish it to summon a Dinowrestler from the deck, as long as you control less monsters than your opponent. With these Spell and Trap Cards that banish themselves, this was the first deck that I could make a home for the new TCG World Premiere card, Flowerdino, which can easily Special Summon itself from the hand and shuffle back banished Spell/Traps for a draw. Besides all this, the rest of the deck is filled out with typical Dino goodstuff, such as Souleating Oviraptor, Miscellaneousaurus, Overtex Qoatlus, and more. Suplex your opponent’s into a Doodled Jurassic World with the help of all these Dinosaurs!

Note: This is continuing the style of Creative Deck Profile articles, designed to showcase a build through replays and an attached summary. If you wish to see a CDP for an archetype, theme, or strategy you love, feel free to private message me on the YGOrg Discord server, the comments section of any of my YouTube videos, or just post a comment in response to this article on our Facebook page with your ideas to keep under consideration! On most YGO-related communities my username is Quincymccoy, so feel free to reach out. Current pending requested profiles include: Runick, Poker Knight, Ojama with DAD. 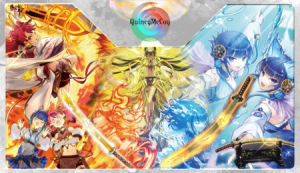