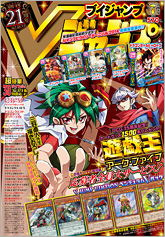 This pack includes 5 cards used by Yuya and Akaba in the comic included in this month’s V Jump! It also includes 2 Pendulum Monsters!

And the cards included this time aren’t Ultra Rares, but Secret Rares! And this pack’s cards come with a special handy booklet that’ll teach you how to really use these cards!

So grab your copy of the Jumbo sized issue of V Jump released on May 21st, and apply for this super rare pack that you can only apply for via this issue! For information on how to apply, check V Jump!

※ However there are some mailing and application costs.

DDD Kaiser the Conqueror
(DARK Fiend-Type ATK 2800/DEF 2100)
It’s a Level 7 Monster who, as long as you call it out with a Pendulum Summon, has a powerful effect that can decide the Duel. If it’s Pendulum Summoned, it negates the effects of all face-up cards your opponent controls until the turn ends! And, during the turn this card was successfully Pendulum Summoned, you’ll have the chance to have this card attack 3 times… … But to do so you, must destroy up to 2 cards in your Spell & Trap Card Zone during your Main Phase with this card’s effect, which lets this card gain an additional attack for each card it destroys! Next we’ll introduce you to “DD Proud Ogre”, whose Pendulum Effect can let this guy attack 3 times with 3300 Attack!!!

DD Proud Ogre
(DARK Fiend-Type ATK 2300/DEF 1500)
When this card is Normal Summoned: You can Special Summon 1 DARK Pendulum Monster from your Extra Deck! This powerful effect can even call High and Super High Level DARK monsters! (Pay attention though, the effects of a monster special summoned by this effect are negated, and until the end of the rest of the turn you activate this effect, you can only Special Summon “DD” monsters!)
・ Pendulum Scale: 8 (One of its Pendulum Effects makes its Scale 5 if there isn’t another “DD” monster in the other Pendulum Zone”.)
・ Pendulum Effect: Once per turn, you can pay 500 Life Points to have a “DD” monster you control gain 500 ATK.

DD Proud Chevalier
(DARK Fiend-Type ATK 2000/DEF 700)
When this card is Normal Summoned: You can add 1 DARK Pendulum Monster in your Extra Deck to your hand! Its a useful effect to help set up for a Pendulum Summon! Set “DD Proud Ogre” and “DD Proud Chevalier” as your Pendulum Scales! And Pendulum Summon “DDD Kaiser the Conqueror”!!!!!!!
・ Pendulum Scale: 6 (One of its Pendulum Effects makes its Scale 5 if there isn’t another “DD” monster in the other Pendulum Zone”.)
・ Pendulum Effect: Once per turn, you can pay 500 Life Points to lower the ATK of an opponent’s monster by 500 points.

Entermate Warrior Tiger
(EARTH Beast-Warrior-Type ATK 1700/DEF 500)
When this card destroys an opponent’s monster by battle and sends it to the Graveyard, its effect lets it add an “Entermate” Pendulum Monster from your Deck to your hand! Add Pendulum Monsters to your hand to prepare for a Pendulum Summon! By the way, many of the other “Entermate” monsters have abilities that can change the all important ATK and DEF, it has a ton of support to help it activate this effect! Use “Entermate” combos and enjoy Dueling just like Yuya! Let the fun begin!