A new card appears! Denkou – Sekka (Which Comes in “Next Challengers”)

Its ability to seal ambushing Spells and Trap Cards is incredible!!
“Next Challengers” (NECH), which comes out July 19th, 2014, includes a new LIGHT-Attribute monster with an effect that prevents players from activating set Spell/Trap Cards or even Setting Spell or Trap Cards!

Read on about the details and consider ways only you’ll be able to use it! 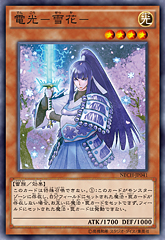 It’s a useful effect against Deck themes and Decks that rely on a lot of Spell/Trap Cards to ambush their opponents, such as “Artifacts”!

What kind of cards will you use it with?