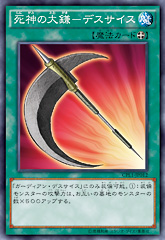 As well, during the second part, let’s introduce a card reprinted in “Sturcture Deck -HERO’s STRIKE-“!

Reaper Scythe – Dreadscythe
(Equip Spell Card)
An Equip Spell Card that can only be equipped with “Guardian Dreadscythe”. The Equipped monster gains 500 ATK for each monster in each Graveyard! It counts the monsters in both YOUR and YOUR opponent’s Graveyard, so if there’s a total of 10 between them, it gains 5000 Attack! Or if there are 20, it gains 10,000 Attack! “Guardian Dreadscythe”, which comes in the same pack, comes with an effect that equips this Spell Card to it straight from the Deck, allowing you to pull off a combo that’ll make its ATk skyrocket, so much that it can instantly decide the Duel! And it’s not a dream!