“Crossover Souls (CROS)” which comes out February 14th, 2015, includes a Level 11 “Nekroz” Ritual Monster that has an effect that seals the Extra Deck and another effect that purifies the battlefield, reducing it to nothing! 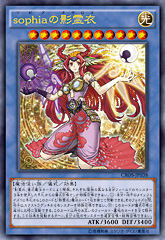 Nekroz of Sophia
[Spellcaster-Type ATK 3600 / DEF 3400 ]
You can Ritual Summon this card with any “Nekroz” Ritual Spell Card. Must be Ritual Summoned from your hand by using 3 monsters with different Types you control, and cannot be Special Summoned by other ways.
(1) During either player’s Main Phase 1: You can discard both this card and 1 “Nekroz” Spell Card; during this Phase, your opponent cannot Special Summon from the Extra Deck.
(2) When this card is Ritual Summoned: You can banish all other cards on the field and in both Graveyards. During the turn you activate this effect, you cannot Normal or Special Summon other monsters.

In Order To Ritual Summon It, You Have To Have 3 Different Types On The Field

For Example, Normal Summon the Level 4 “Manju of the Ten Thousand Hands” (Fairy-Type), use “Nekroz Kaliedomirror” to send a Level 7 monster from your Extra Deck to the Graveyard to Ritual Summon both “Nekroz of Clausolas (Warrior-Type)” and “Nekroz of Unicore (Spellcaster-Type)” at the same time, which should give you the three monsters needed to fulfill this card’s summoning condition!

“Zefra” Pendulum Monsters That Have “Nekroz” In Their Names Also Appear!
Also, we’re introducing two Pendulum Monsters that appear in “CROS“! Because they are “Nekroz” cards that also have “Zefra” in their names, they hid various unseen possibilities!

Nekroz of Sword Saint – Zefra Saber
[Level 4 Spellcaster-Type ATK 1500/DEF 800 Pendulum Scale 1/1]
You can Tribute this card in your hand or on the field to activate its effect, which lets you Tribute monsters from the hand or field to Ritual Summon 1 “Nekroz” Ritual Monster from your hand! And since it’s a Pendulum Monster, while it’ll go to the Graveyard if you Tribute it from the hand, if you Tribute it from the field, it has the benefit of adding itself to the Extra Deck.which will let you set up for your next move! While this card is in the Pendulum Zone, it has the benefit of letting you Pendulum Summon “Nekroz” and “Zefra” monsters!

Nekroz of Blazing Beast – Zefra Exa
[Level 5 Dragon-Type ATK 2000/DEF 1000 Pendulum Scale 7/7]
If a “Nekroz” or “Zefra” card you control other than “Nekroz of Blazing Beast – Zefra Exa” is destroyed by battle or by a card effect, you can Special Summon this card from your hand or Graveyard! As long as it’s destroyed in a Pendulum Zone or a Monster Card Zone, you can activate this effect! When should you Special Summon him? When your Monster Zone is empty? Do you use it in conjunction with the effect of a “Nekroz” Spell Card in the Graveyard? Be sure to use it well! Its Pendulum Effect is the same as “Nekroz of Sword Saint – Zefra Saber”. Be careful when you Pendulum Summon!

If you place these two in your Pendulum Zones, you’ll be able to Pendulum Summon multiple Level 2~6 “Nekroz” monsters at the same time (obviously “Nekroz of Sword Saint – Zefra Saber” and “Nekroz of Blazing Beast – Zefra Exa”, but also monsters like “Schritt, Caster of the Nekroz” and “Dance Princess of the Nekroz”)! Which makes them useful in setting up the Ritual Summon “Nekroz of Sophia”!

Now, how will you use these new “Nekroz” cards? Think up stuff only you can do!

Crossover Souls [On Sale in Japan February 14th, 2015]
The “Clear Wing Synchro Dragon” of Yugo who rides a D-Wheel to Synchro Summon appears! A ton of cards used by Yuya and his many rivals are also included, and there’s also a ton of cards included to power up existing Series! Also keep your eyes on the new Series “Zefra” who also carry the names of the existing Series ‘tellarknight, Yang Zing, Shaddoll, Nekroz, and Ritual Beast!
[To The Product Information Page]