Edit 1: New Raidraptors and Red-Eyes cards!
Edit 2: Infernoids get a Fusion Spell, a Tuner and a Fusion Boss, the dreaded Tierra! 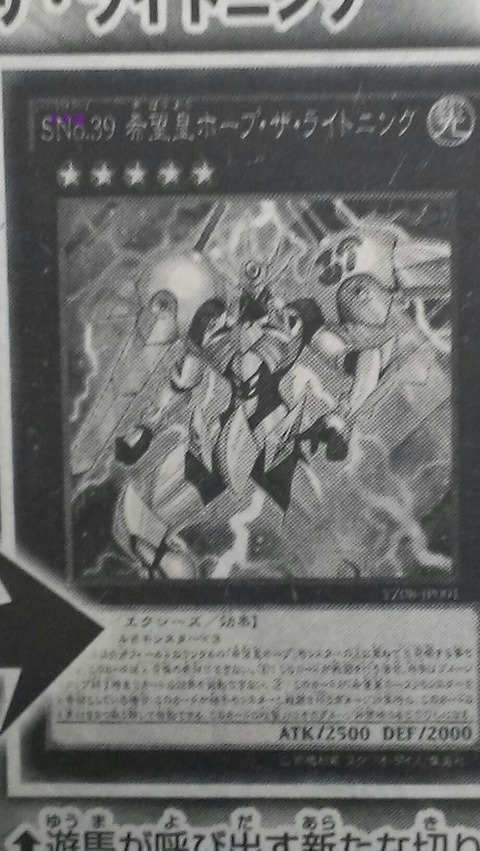 According to Maxut, Utopia the Lightning is placed on top of a Rank 4 and requires 2 Materials to use its effect. 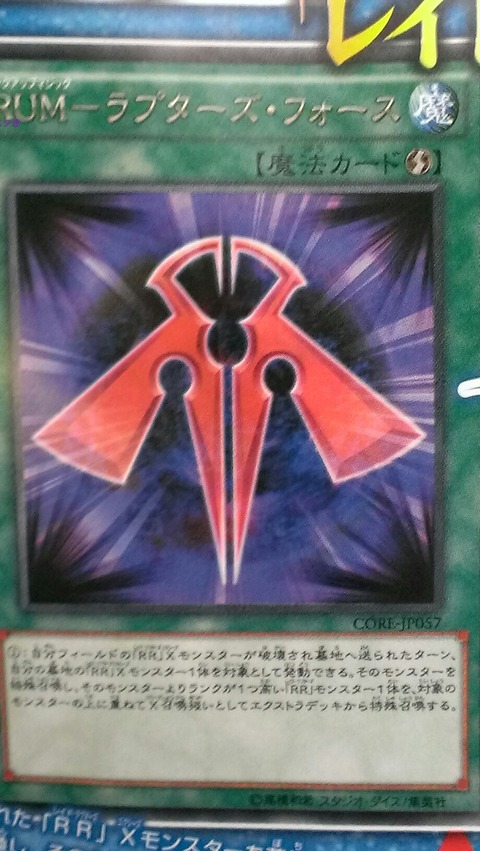 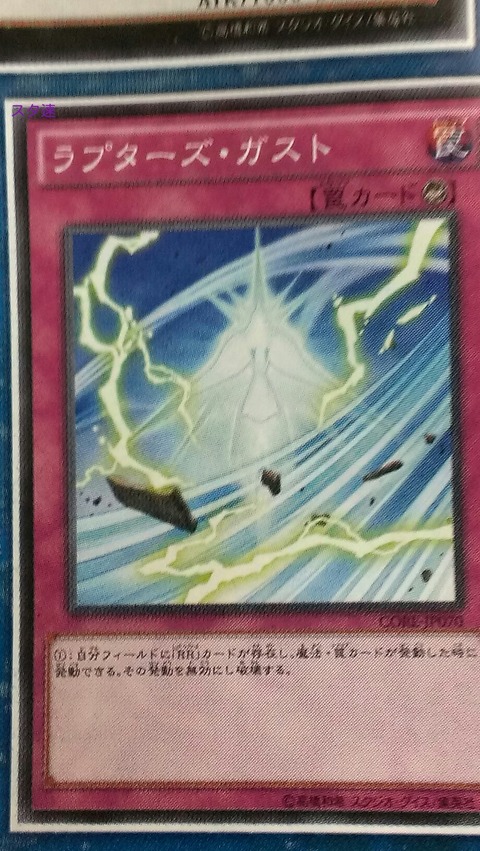 CORE-JP070 Raptor’s Gust
Counter Trap Card
(1) If you control a “Raidrpator” card, when a Spell/Trap Card is activated: Negate that activation, and if you do, destroy that card. 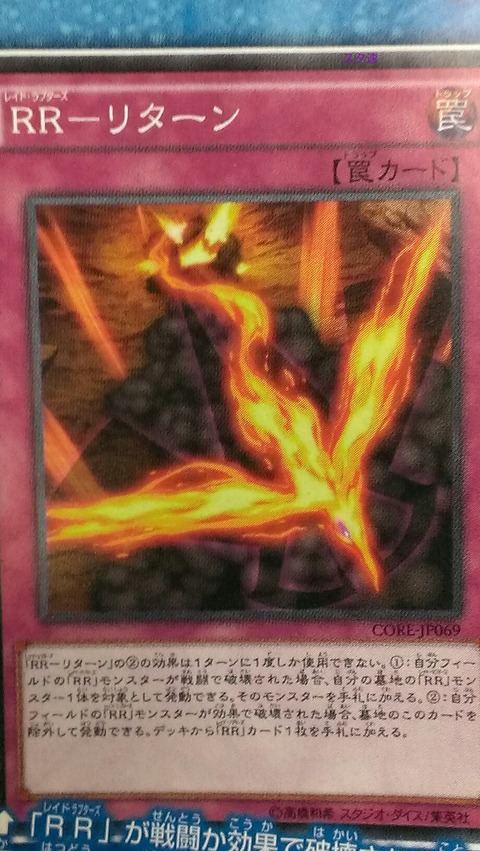 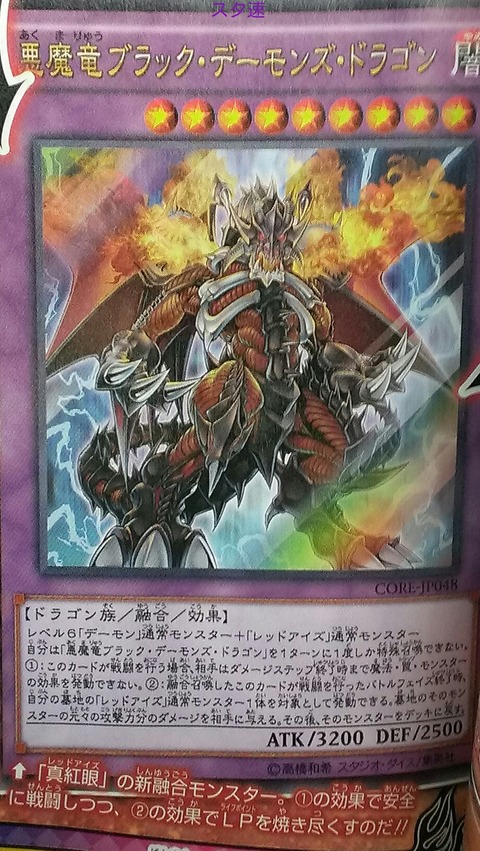 CORE-JP048
Akumaryuu – Black Daemon’s Dragon / Fiend Dragon – Black Daemon’s Dragon / Black Dragon Archfiend
1 Level 6 “Archfiend” Normal monster + 1 “Red-Eyes” Normal monster
You can only control 1 “Black Dragon Archfiend”.
(1) If this card attacks or is attacked, your opponent cannot activate cards or effects until the end of the Damage Step.
(2) At the end of the Battle Phase, if this Fusion Summoned card attacked or was attacked: You can target one “Red-Eyes” Normal monster in your Graveyard; inflict damage to your opponent equal to that target’s original ATK, then, return that target to the Deck. 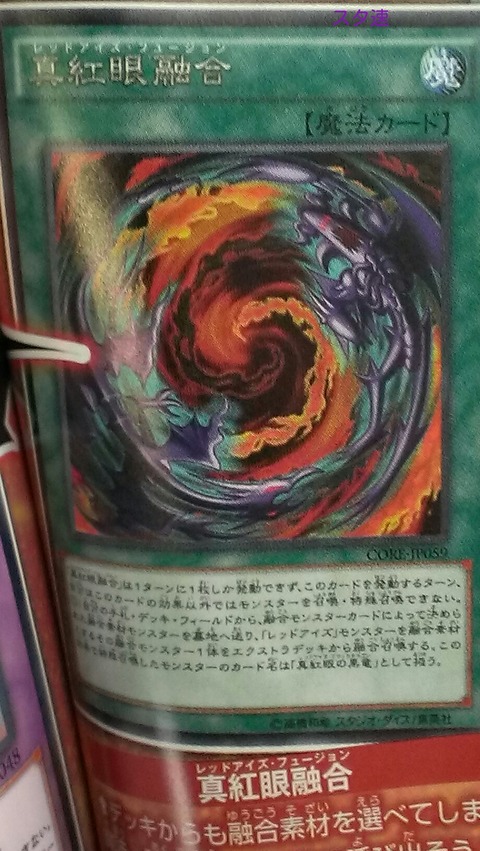 CORE-JP059 Red-Eyes Fusion
Normal Spell
You can only activate 1 “Red-Eyes Fusion” per turn, and you cannot Normal Summon or Special Summon any other monsters this turn.
(1) Fusion Summon 1 Fusion Monster that lists a “Red-Eyes” monster as a Fusion Material Monster from your Extra Deck, using monsters from your hand, Deck, or your side of the field as Fusion Materials. The name of the Fusion Monster Special Summoned with this effect is treated as “Red-Eyes B. Dragon”. 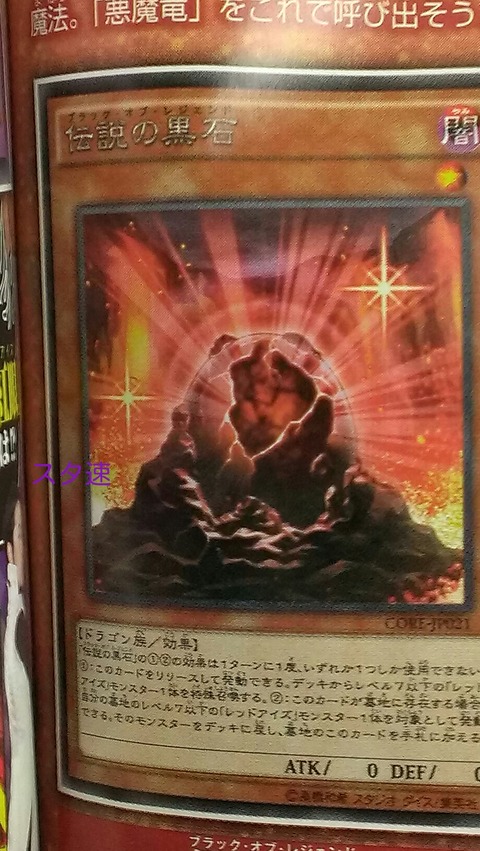 CORE-JP021 Black of Legend / The Black Stone of Legend
Level 1 DARK Dragon-Type Effect Monster
ATK 0
DEF 0
You can only use 1 “Black Stone of Legend” effect per turn, and only once that turn.
(1) You can Tribute this card; Special Summon 1 Level 7 or lower “Red-Eyes” monster from your Deck.
(2) If this card is in your Graveyard: You can target 1 Level 7 or lower “Red-Eyes” monster in your Graveyard; shuffle it into the Deck, and if you do, return this card from your Graveyard to your hand 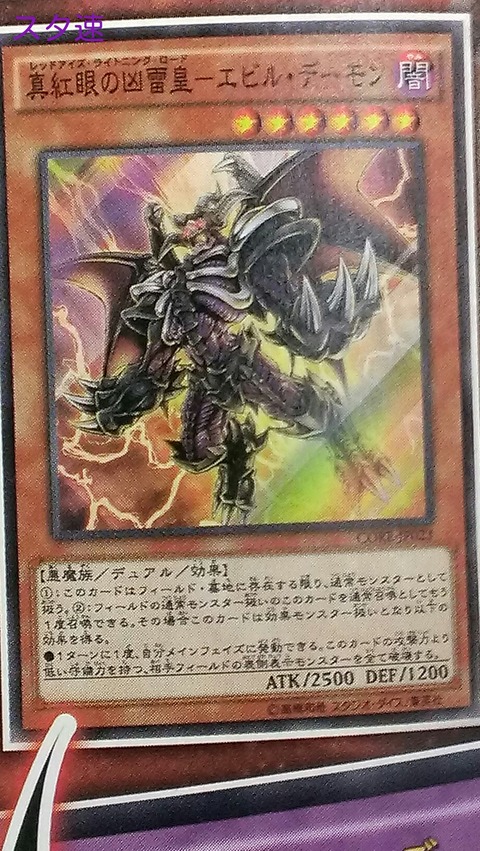 CORE-JP023 Red-Eyes Lightning Lord – Evil Daemon / Red-Eyes Lightning Lord – Evil Archfiend
Level 6 DARK Fiend-Type Gemini Effect Monster
ATK 2500
DEF 1200
(1) This card is treates as a Normal Monster while it is face-up or in the Graveyard. (2) You can Normal Summon this face-up monster that is treated as a Normal Monster to have it be treates as an effect monster with this effect.
● Once per turn: You can destroy all face-up monsters your opponent controls with a DEF lower than this card’s ATK. 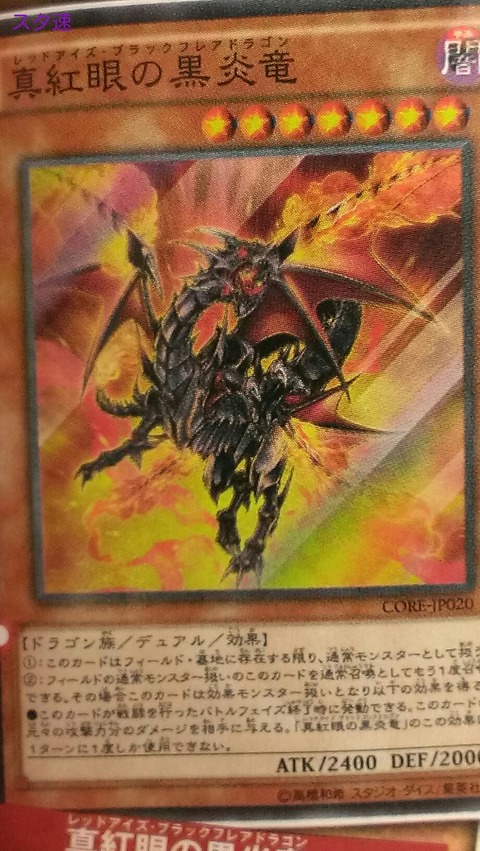 CORE-JP020 Red-Eyes Black Flare Dragon
Level 7 DARK Dragon-Type Gemini Effect Monster
ATK 2400
DEF 2000
(1) This card is treated as a Normal Monster while face-up on the field or in the Graveyard.
(2) While this card is a Normal Monster on the field, you can Normal Summon it to have it become an Effect Monster with this effect.
● At the end of a Battle Phase when this card attacked or was attacked: You can inflict damage to your opponent equal to this card’s original ATK. This effect of “Red-Eyes Black Flare Dragon” can only be used once per turn. 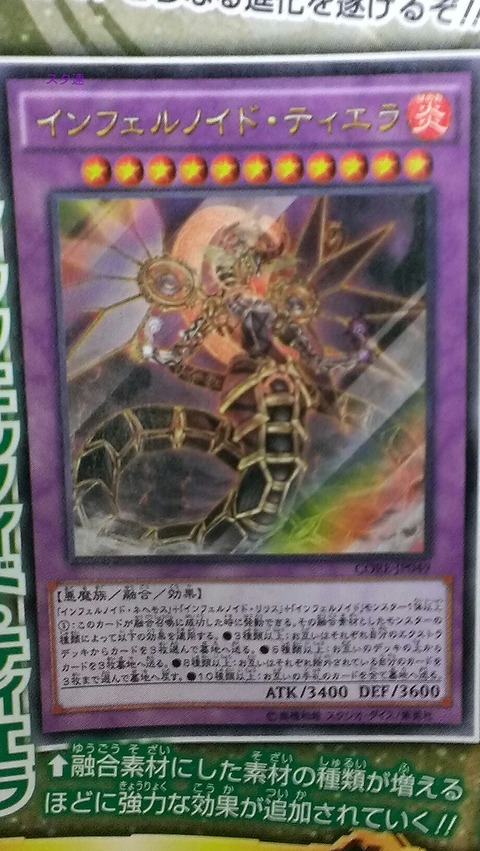 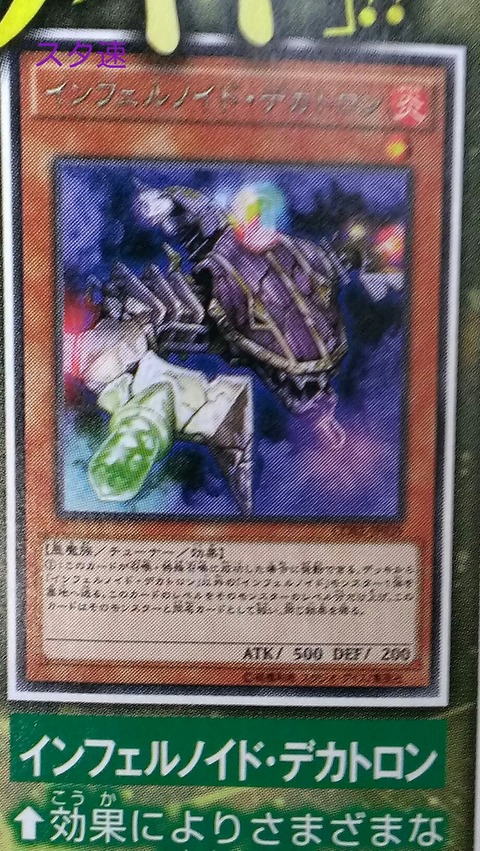 Infernoid Dekatron
Level 1 FIRE Fiend-Type Tuner Effect Monster
ATK 500
DEF 200
(1) If this card is Normal or Special Summoned: You can send 1 “Infernoid” monster from your Deck to the Graveyard, except “Infernoid Decatron”. This card gains Level equal to that monster’s Level, card name becomes the same as that monster, and gains the same effects. 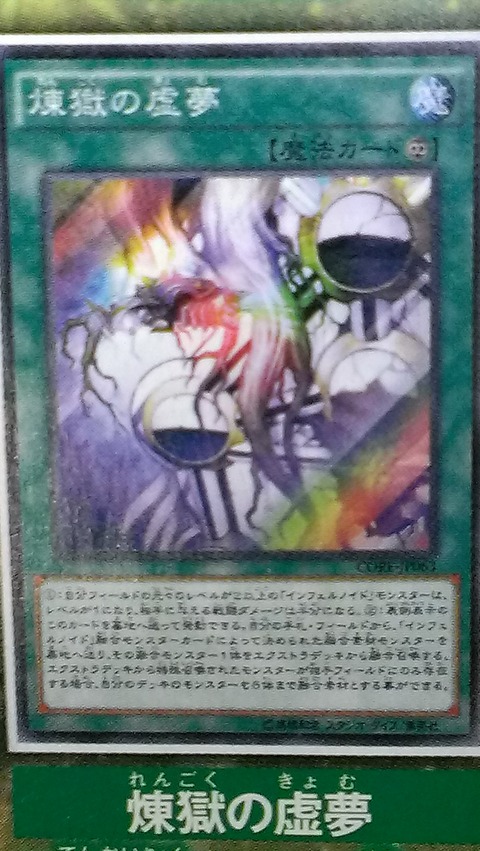 Rengoku no Kyomu / Void Dream
Continuous Spell Card
(1) All “Infernoid” monsters you control with an original Level of 2 or higher become Level 1, and all battle damage they inflict to your opponent becomes halved.
(2) You can send this face-up card to the Graveyard: Fusion Summon 1 “Infernoid” Fusion Monster from your Extra Deck by using monsters you control or have in your hand as the Fusion Materials. If your opponent controls a monster Special Summoned from the Extra Deck while you do not, you can also use up to 5 monsters from your Deck. 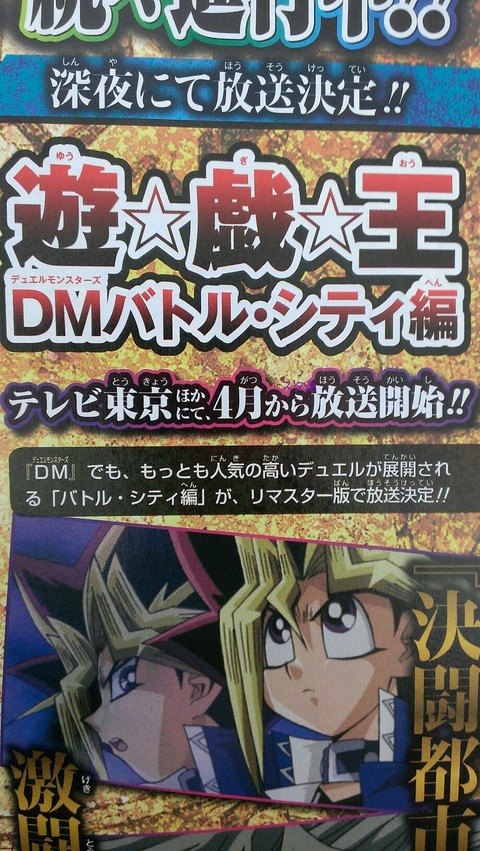 Remaster of Battle City to air starting in April in Japan, alongside the Duelist Kingdom Remaster 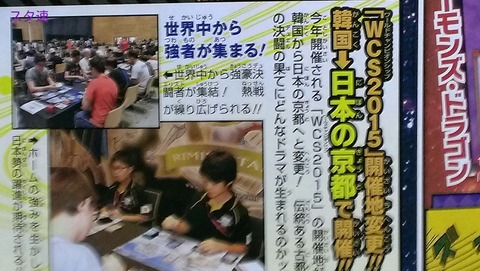 World Championship 2015 is being changed from Seoul, South Korea to Kyoto, Japan!