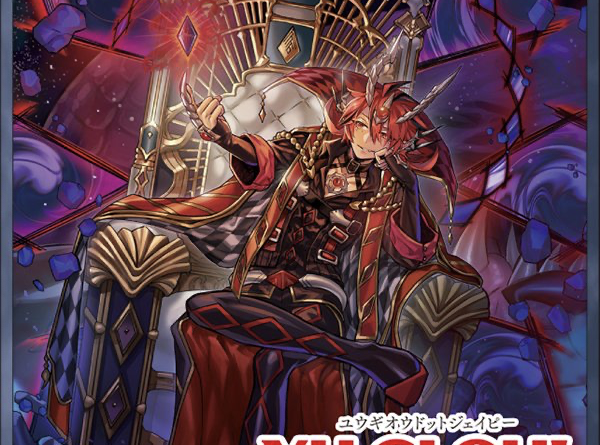 What, you didn’t think it was all nice and done just yet, did you~? CYAC-JP009 アルギロスの落胤 Argyros no Rakuin (Fallen of Argyros)
Level 2 DARK Thunder Effect Monster
ATK 700
DEF 700
You can only Special Summon with the 1st effect of this card’s name once per turn. You can only use the 3rd of this card’s name effect once per turn.
(1) If there is a Level/Rank/Link-2 monster on the field, you can Special Summon this card (from your hand) to either field.
(2) Link Monsters that point to this card cannot activate their effects.
(3) During your opponent’s turn (Quick Effect): You can target 1 Xyz Monster on the field; detach up to 2 materials from it. CYAC-JP010 氷水帝エジル・ラーン Hisuitei Aegir Ran (Icejade Aegirine Ran)
Level 7 WATER Aqua Tuner Effect Monster
ATK 1500
DEF 2500
You can only use the 1st effect of this card’s name once per turn.
(1) You can discard 1 other “Icejade” card or WATER monster; Special Summon this card from your hand, then you can Special Summon 1 “Icejade Token” (Aqua/WATER/Level 3/ATK 0/DEF 0). While that Token is in the Monster Zone, the player who Summoned it cannot Special Summon monsters from the Extra Deck, except WATER monsters.
(2) This card’s name becomes “Icejade Cenote Enion Cradle” while it is equipped with an Equip Card.

Note: Rán is the Nordic Goddess attested to be the wife of Gymir/Aegir. CYAC-JP011 導きの聖女クエム Michibiki no Seijo Quem (Guiding Quem, the Virtuous)
Level 4 LIGHT Spellcaster Tuner Effect Monster
ATK 1500
DEF 1500
(This card is always treated as a “Dogmatika” and “Despia” card.)
You can only use the 1st and 2nd effect of this card’s name each once per turn.
(1) If this card is Normal or Special Summoned: You can send 1 “Fallen of Albaz”, or 1 card that mentions it, from your Deck to the GY.
(2) If a card(s) leaves the Extra Deck: You can target 1 “Fallen of Albaz”, or 1 monster that mentions it except “Guiding Quem, the Virtuous”, in your GY; Special Summon it. CYAC-JP071 烙印の即凶劇 Rakuin no Étude (Branded Etude)
Continuous Trap Card
You can only use the 1st effect of this card’s name once per turn.
(1) During either player’s turn, you can: Immediately after this effect resolves, Synchro Summon using monsters you control as material, including at least 1 Dragon monster.
(2) While you control a “Bystial” monster, any monster sent to your opponent’s GY because they Tributed it for a Ritual Summon or used it as material for a material for a Fusion, Synchro, or Link Summon is banished instead.

Note: Etude is a short piece of music, designed to give a performer practice in a particular area or skill. It can also refer to Etude Theater, a form of improv theater designed to help strengthen an actor’s ability to ad-lib.