The main characters don’t get anything particularly new. It’s the secondary cast members that get news.

Fujiki Yusaku
He Duels against various Duelists using his cool-headed logic as his weapon. His skills as a Duelist are top notch.

By using “LINK VRAINS” which was built inside the Network System, Duels unfold where Duelists change their appearance separate from their real life identities!

The Charisma Duelists that Yusaku Duels on LINK VRAINS.

Blue Angel
An Idol-style Charisma Duelist who charms the audience with her lovely figure. Is the way she Duels as adorable as her appearance!?

Go Onizuka
A Charisma Duelist who looks like a Professional Wrestler. The monsters he uses share an equally powerful appearance! 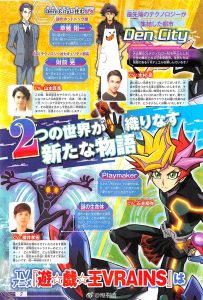 A city in the near future which serves as this show’s setting, nearly everything in it is connected to the megacorp SOL Technology Inc. Its unique gimmick is the VR Duels which the inhabitants enjoy.

People Who Live In Den City

Kusanagi Shouichi: The Mysterious Hot Dog Vendor
While he looks like an ordinary mid-city hot dog vendor, his real identity is that of a top-notch hacker who supports Playmaker’s Duels.

Zaizen Akira: SOL Technology Inc.’s Security Chief
An elite member of the the Security team for the city and its Virtual Reality infrastructure. He spends every day protecting the city against hackers.

A New Story That Ties Together 2 Worlds

Playmaker
Yusaku’s appearance in “LINK VRAINS”. Behold a never-before-seen Duel as he rides his D-Board!

The Mysterious Life Form
A life form surronded in mystery that appears before Yusaku. Due to certain circumstances, it appears to be on the run from SOL Technology Inc.