Welcome to the next edition of the Casual Deck Strategy articles here on YGOrganization, and yes, the electricity puns do not stop with the title. I’ve wanted to do an article ever since one special Thunder-type monster was revealed, but I just couldn’t get the numbers to work right… until now! Watt card am I talking about? Wire you going to want to read this? I can think of amp’le reasons, so let’s start before my puns get more re-volt-ing and I’m forced to pull the plug… 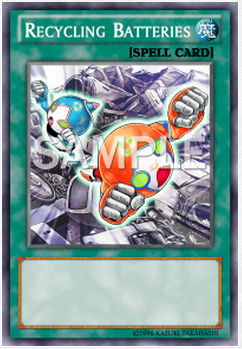 Strategy and the Evolution of an Archtype:

Before I begin, no this is not an article on Watts…. I’m talking about the original Thunder-type archtype, the Batterymen! But just as a quick question, did you realize how little cards have been added to the pool of Thunder-type monsters recently? The last 20 Thunder-type monsters released into the game includes cards all the way back to ‘Starstrike Blast’, you know, that pack that introduced Glow-Up Blub back in 2010. Yes, I did just say 2010… As a result, I am always very excited whenever a new Thunder-type monster joins the fray. And boy, did this battery really make an impact…

If you’re asking how a +0 Searcher can make a decent impact, you’re thinking about it the wrong way. Way back in the day, before this guy was released, the Batteryman deck operated on a simple concept: somehow get 3 Batteryman AA on the field in faceup attack position, activate Short Circuit, then attack directly with your three 3000 ATK monsters for game. People tried so hard to get this strategy to work, using everything from Inferno Reckless Summon to multiple Call of the Haunted and Battery Charger but the deck still was not consistent enough to function. Konami kept trying to throw the archtype a bone, especially when they released Batteryman AAA, another option to get 2 Batterymen to the field easily, and then Batteryman Fuel Cell, who could easily fulfill the 3rd Batteryman for Circuit, but the deck still couldn’t function without the help of a large base of the ‘Hunder Family’. Even then, the deck was primarily Hunders and not so much Batterymen.

So where does 9V plug into the equation? Answer: He brings the diverse range of Batteries together. The Batteryman deck is literally a combo deck at its finest, except instead of many of the combo decks, such as Mermail, that are currently in style, the combos require more than just 2 cards. It’s definitely a higher risk, higher reward deck, but does that mean it’s too risky to play? Let’s analyze some of the fundamental combos of this deck, now that 9V has revolutionized the run-of-the-mill Batteryman variant.

Did you know that with the addition of 9V, if you open with Call of the Haunted and 9V or a way to search/draw either of them on your first turn, you can OTK on your next turn? If you add a Short Circuit to that combination, you can OTK through any amount of unchainable traps/monsters. If you add a Batteryman Fuel Cell to the original 2-card combo, that’s an OTK including you bouncing one of your opponent’s cards back to the hand. Or getting rid of a pesky Beezle. Any of those combinations, you just summon 9V, add Fuel Cell to the hand, then you set Call of the Haunted. Before the end of your opponent’s turn, COH back 9V, add Batteryman Charger, and since 9V only self-destructs at your end phase, you already have Tribute Fodder! Tribute Summon Charger, who then special summons another 9V from the Hand or Deck, who then searches Fuel Cell #2. Special Summon the 2 Fuel Cells from your hand and voila, 2000+2100+2100+3000 = 9200 damage, which is well more than enough for game! If you have a 3rd Fuel Cell, just tribute off 9V to return something before summoning it to go for the OTK, and it should go without saying that you should Short Circuit before attacking if you can!

So what’s the point of this article if the ‘main combo’ of the deck requires 2 or 3 cards to pull off an OTK? Because let’s face it, the odds of that happening are not the greatest… Approximately 1 out of every 5 duels. But the fun doesn’t end there, you see, the Thunder-type also got a lovely generic searcher, Thunder Seahorse. You see, the Batteryman deck may have been build as a combo deck, but it has a lot of independent pieces that can work by themselves if need be to continue the duel and keep everything flowing, especially when Seahorse searches out Batteryman AAA, which is a 1-card Rank 4. Before I explain a bit more about the deck, let’s talk about a core lineup:

*Run either 2 Portable and 2 Charger or 3 Portable no Charger. If you run 1 Charger, you won’t see it enough, but it also allows you to bring something back if you only got 1 battery in grave

So pretty much this Core Lineup is standard. Now you definitely can take it in different directions, such as a Turbo variant featuring Reckless and Upstart, or you can choose a more controlling variant using Kaiser Colosseum. Either way, Batteryman Micro Cell is one of your key cards that is easily overlooked, but you cannot ignore the 9V summon during the opponents turn, searching another Batteryman, then drawing an additional card. That +2 that can keep snowballing into a winning position… And that’s it for the Core Lineup… except for one card, which gets its own section since it is just that special!

The Seventh One – Why TWO Copies??:

So now that we’ve all had a decent amount of time to think about this card since its initial reveal back with PRIO spoilers, many people have sided with one of two opinions on the card. Either A) The decks today run too much draw power for this to be effective OR B) You won’t see it enough to warrant running 1 copy, and running more than 1 copy makes it useless. If you’re reading this and not part of either camp, I’d love to hear your reason why down in the comments below, but I have decided after much soul searching and testing that my favorite number to run this is a whopping 2. Especially when playing with OCG cards. Let’s introduce our last new card for the article, Number 99: Hope Dragun!

Oh, so now if I dead-draw a copy of The seventh one and just happen to have a 1-card Rank 4 Xyz at the ready, I get to summon this guy? Oh wait, that’s Batteryman AAA‘s job… Or you could always go pro and use it on the Rank 6: Number 39: Beyond the Hope. That is a card for another article, so I just left the link there for you, but let me reiterate: The Seventh One is a free Number C101, and that is its main job. It’s a free 2800 ATK monster that removes a Special Summoned monster from your opponent’s field once per turn, and that can special summon itself back if it is destroyed! Removing troublesome Xyz and Synchro monsters for a +1 is great, and you may even get lucky and get something else out of it too. Running 2 of the Seventh one simply lets you see it more, and the creation of Hope Dragun makes it not as much of a dead draw anymore if you just happen to start with it in your first 5 cards…

Without 7th or OTK…:

Watt does the Batteryman deck live for when the two main focuses are not available? Firstly, you always can hide behind Micro Cells. Micro Cell special summons 9V from the deck, 9V adds a new Micro Cell, then you draw and rinse and repeat the next turn. It is effectively a Fire Hand | Ice Hand combo that isn’t endless and gives you advantage instead of disrupting the opponent. But the Batterymen don’t rely on the OTK as their only method of winning, especially when their support cards have so much power locked inside. A Micro Cell that lasts facedown until your turn, a AAA with a AAA in grave, heck any monster as tribute material for Charger + Fuel Cell sets up for a Short Circuit to get you right back into the game.

Another option you can choose to go for is Batteryman Industrial Strength, the unofficial boss monster of the Batterymen. The main issue is that Industrial forces you to lose Batterymen and other thunders from your Graveyard… which sucks. Especially when your best support card, Portable Battery Pack, requires 2 Batterymen in the Graveyard. You see, Portable also doubles as another win condition, as it is a free Rank 4, 5, or 6 Xyz Summon depending on the batteries available in your Graveyard. Constellar Pleaides? Number 61: Volcasaurus? Evilswarm Exciton Knight? Constellar Ptolemy M7? This deck has better Xyz options than you probably gave it credit for, but don’t forget your most basic option of all, bringing back Fuel Cell with any other battery to bounce a Synchro or Xyz monster and gain a Batteryman back for a +1. With the advantage-driven meta currently all the hype, Batterymen can trade with the best of them. You just gotta have some faith that their charge will hold on long enough!

Completed Example Deck:For those of you who have completed reading this guide, it’s time to charge up! I just have you amp’le amounts of shocking information on the sparkiest and snazziest archtype! The following link is a screenshot of my personal Batteryman build. It may not be the best build for them, but it can serve as a baseline for your deck construction in the future: http://i.imgur.com/vYL0P5p.png