It’s an important card for making the most of the powerful “Covenant” cards that inflict damage to you every turn! Booster SP Raging Masters (SPRG), which comes out August 9th, 2014, also includes “Lease Laundering” a key card for the Covenants used by Akaba Reiji who uses the DD, which the Covenants aid in bringing out! In the anime, in his Duel with the protagonist, “Yuya”, he used this card in a powerful combo to wipe away the Sword of Damocles-esque effect of his own Covenant Cards! Check out further details about it here, then consider what cards you want to use to build your “DD” Deck! 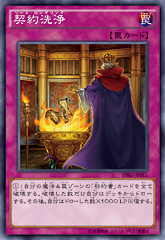 Lease Laundering
(Normal Trap Card)
①: Destroy all “Convenant” cards in your Spell & Trap Zones, then draw 1 card for each destroyed, then gain 1000 LP for each card drawn.

You can use the powerful effects of the “Covenant” cards while completely dodging their negative effects, while also replenishing yur hand and recharing your Life Points!!

Covenant with the Infernal Gate

(Continuous Spell Card)
It has an incredibly powerful ability to add 1 “DD” monster from the Deck to the hand. And since it’s a Continuous Spell Card, you can activate its effect once per turn during each of your turns! However, use it carefully since it has a double-edged effect that inflicts 1000 damage to you during each of your Standby Phases. By using “Lease Laundering” to destroy it before your next Standby Phase, you pull off a potent combo of avoiding damage to your Life Points and gain MORE Life Points. (By adding a “DD” to your hand and having drawn, you’ll gain LP without reducing your hand!)

Covenant with the Swamp King
(Continuous Spell Card)
A Continuous Spell Card that can be used to Fusion Summon a Fiend-Type Fusion Monster. This card also has an effect you can activate once per turn! Also, if you Fusion Summon a “DD” Fusion monster (in addition to fusing from your hand or field), you can banish the Fusion Material Monsters from the Graveyard! You should set up your Summoning “DD” monsters while using “Lease Laundering”, because this card also has an effect that deals 1000 damage to you during each of your Standby Phases!

Will you use their powerful effects every turn, accepting the damage from the “Covenant”?
Or will you destroy them with “Lease Laundering” to gain Life Points and draw?
Master your Duelingf Tactics and win using the power of the Demons who wield the power of kings, reigning over the Different Dimension! 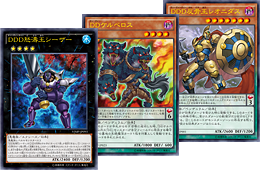 This Summer, “DD” are hot hot hot!!!
This Summer, the September Issue of V Jump (on sale July 19th, 2014) comes with the Xyz Monster, “DDD Caesar the Wave Lord” while the 36th Issue of Weekly Shonen Jump (on sale August 4th) has the Pendulum Monster “DD Cerberus” also included.

On top of that, “The Valuable Book 17” (on sale August 21st) comes with 2 cards attached, one of which is an Official Card Game Original monster, not from the animated series… the powerful Pendulum Monster “DDD Leonidas the Rebellious Lord”!

New cards are appearing one after the other, making “DD” even stronger and stronger!

Also, be sure to check out “Booster SP Raging Masters”, since it contains a ton of cards other than the one introduced here, including many “DD” monsters from the TV Show, and a variety of “DD” related cards!

Booster SP Raging Masters (On Sale August 9th, 2014)
In the anime, “Akaba Reiji” stood before the protaganist “Yuya”, with overwhelming power… … and this pack contains the “DD” monsters Reiji used and their support cards such as the “Covenant” cards! Also, also the elites of “LDS” (Leo Duel School), who are taught every major Summoning Method, have their “X-Saber”, “Gem-Knight” and “Constellar” cards included as well, so noteworthy “Fusion”, “Synchro” and “Xyz” cards also appear! [To The Product Page]