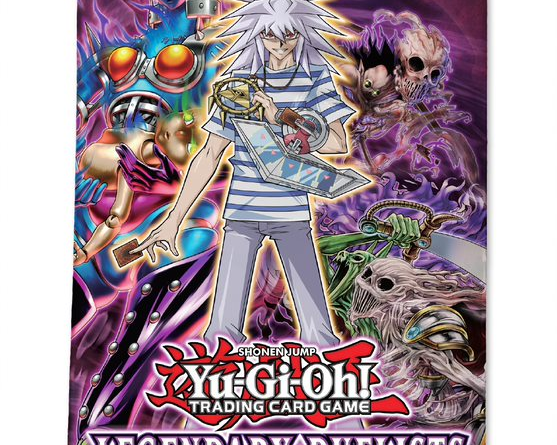 A set for Sour Souls 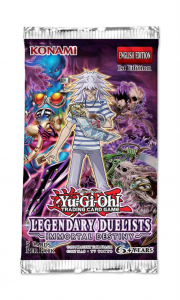 Sometimes it’s good to be bad! Legendary Duelists: Immortal Destiny embraces the darkness with new cards for five of the most twisted Duelists from the first five Yu-Gi-Oh! animated series!

Bakura’s Dark Necrofear/Destiny Board combo from the Battle City Finals story arc forced Yugi to the brink of defeat! Legendary Duelists: Immortal Destiny reimagines Dark Necrofear and creates new ways to assemble and defend the Destiny Board as it spells out its message of despair!

Not all HEROes fight for justice! As the Supreme King, Jaden laid waste to an entire world in a quest for further fusion power in Yu-Gi-Oh! GX. For the first time in over a decade, Legendary Duelists: Immortal Destiny introduces new “Evil HERO” monsters and Spell Cards to go with them – including a Field Spell that lets you Fusion Summon “Evil HERO” monsters with cards other than Dark Fusion!

Rex Goodwin cast aside his humanity, and an arm, in a bid to wield the marks of a Signer and a Dark Signer at the same time. He succeeded, and it took the combined strength of Yusei, Jack Atlas, and Crow to defeat Rex’s Sun Dragon Inti, Moon Dragon Quilla, and Earthbound Immortal Wiraqocha Rasca! Legendary Duelists: Immortal Destiny bridges the gap between the two strategies, making it easier than ever to Synchro Summon the Sun and Moon Dragons, find Wiraqocha Rasca, and win with it in one clean strike.

Quattro, the legendary Number Hunter and Champion of Asia from Yu-Gi-Oh! ZEXAL returns! With new Gimmick Puppets crafted for his arsenal, a scary fate awaits anyone who dares challenge them.

And finally, rounding out Legendary Duelists: Immortal Destiny, Yuri arrives on the scene straight from the Fusion Dimension of Yu-Gi-Oh! ARC-V! With powerful new Predaplants at his disposal, they’ll make any opponent an easy meal.

Launching Friday, September 27, Duelists will be able to get their hands on Legendary Duelists: Immortal Destiny, which embraces the darkness with new cards for five of the most twisted Duelists from the first five Yu-Gi-Oh! animated series!

The complete set contains 58* cards, including:

*The Japanese equivalent set had only 56