This card, which debuts in High-Speed Riders, may cause some confusion with its name, due to how said name is being handled on the Yu-Gi-Oh! wiki. Let’s try to preemptively clear up said confusion.

シンクローン・リゾネーター
Level 1 Fiend/Tuner/Effect
DARK
100 ATK / 100 DEF
If there is a Synchro Monster on the field, you can Special Summon this card (from your hand). You can only Special Summon “Synclone Resonator” once per turn this way. If this card is sent from the field to the Graveyard: You can target 1 “Resonator” monster in your Graveyard, except “Synclone Resonator”; add it to your hand.

You may notice this card is listed on the wiki as “Synchron Resonator”. This is because the official subs of Yu-Gi-Oh! 5D’s, as well as the official yugioh.com site, list the card under that name. However, the card is NOT a “Synchron” monster and thus cannot be searched by cards such as “Tuning”.

The wiki (where I am an administrator, to clarify) prioritizes official names over all other names, including Organization-made names. Thus, the article has to stay at “Synchron Resonator” until the card’s TCG name is revealed – which will hopefully not be “Synchron Resonator”

If you look at the wiki’s article, you’ll see a notice at the top of the page that specifies its not a “Synchron” monster. Please keep a lookout for such notices when you’re using the wiki. They are there for a reason and are meant to prevent confusion, which I’ve been told often doesn’t happen. Do not just search for archetype names in the search bar and assume everything that comes up is a member. This often isn’t the case.

A bit of background for WHY they may have called it “Synchron Resonator”. The card’s Japanese names is indeed VERY close to “Synchron”, but is preventing form being a member by another Japanese character be in between two necessary characters. “Synchron” is “シンクロン”, while the text used here is “シンクローン”. At a first glance, it would be easy to confuse these two. Its also worth noting that the card itself was never shown on-screen in the anime (meaning the monster was, but not the card). In the interest of full disclosure, I must admit the wiki made the same mistake as the official subs when the episode initially aired, for this very reason. It was changed from “Synchron” to “Synclone” about a day later, but the official subs forced our hand and its back at “Synchron” now.

If anyone has any further questions on this, feel free to post them in the comments. I’m also willing to answer any general wiki-related questions anyone may have. 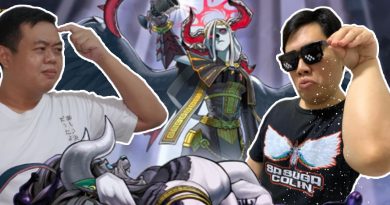 Just One Forbidden Drop is the latest side deck card you need! – Tech Tuesday