So, you wanted generic Insect Support for your Beetrooper Deck? Well, it’s time to bring in the A Team. 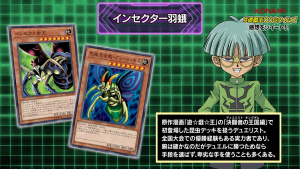 A Duelist who uses an Insect Deck in the original comicbook of “Yu-Gi-Oh!” during the Duelist Kingdom Arc. A talented Duelst who won Japanese Nationals, his skill is not only in winning Duels due to talent, but also preparing beforehand and putting his thumb on the proverbial scale. 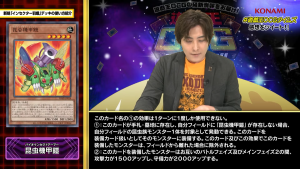 PHHY-JP014 Bio Insect Armor
Level 5 EARTH Insect Effect Monster
ATK 1500 DEF 2000
You can only use the 1st effect of this card’s name once per turn.
(1) If this card is in your hand or GY and you do not control “Bio Insect Armor”: You can target 1 Insect monster you control; equip this card to it, but banish this card and that equipped monster when they leave the field.
(2) A monster equipped with this card gains 1500 ATK/2000 DEF during the Battle Phase and Main Phase 2 only. 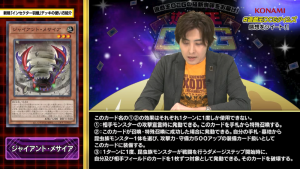 PHHY-JP015 Giant Messiah (Giant Antlion)
Level 3 EARTH Insect Effect Monster
ATK 1200
DEF 1500
You can only use the 1st and 2nd effect of this card’s name each once per turn.
(1) When an opponent’s monster declares an attack: You can Special Summon this card from your hand.
(2) If this card is Normal or Special Summoned: You can equip it with 1 Insect monster from your hand or GY as an Equip Spell that gives it 500 ATK/DEF.
(3) Once per turn, at the start of the Damage Step, if an Insect monster battles: You can target 1 card you control and 1 card your opponent controls; destroy them. 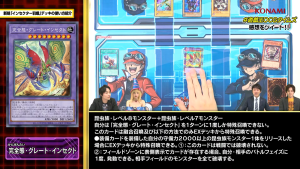 PHHY-JP035 Kanzentai Great Insect (Perfect Great Insect)
Level 9 EARTH Insect Fusion Effect Monster
ATK 3000
DEF 2600
Materials: 1 Level 8 Insect monster + 1 Level 7 Insect monster
Must first be either Fusion Summoned, or Special Summoned from your Extra Deck by Tributing 1 Insect monster with 2000 or more DEF equipped with an Equip Card. You can only Special Summon “Perfect Great Insect(s)” once per turn.
(1) Cannot be destroyed by battle.
(2) Once per the Battle Phase, if there is a face-up card in the Field Zone (Quick Effect): You can destroy all monsters your opponent controls. 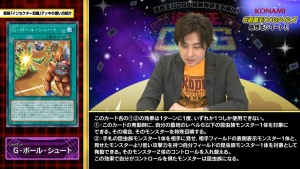 NOTE: The proxy on the left has its first effect written differently from the text box at the bottom of the picture. The text we have translated is the one in the bottom box (this is also the text that was in the script read by the hosts in the stream). The one in the picture reads:
“During the Main Phase of the turn in which this card was activated: you can Special Summon 1 Level 6 or lower Insect monster in your GY.”
In other words, you still get your Insect monster, but instead of selecting your target when this card is first activated and Summoning it at resolution, you can activate it at other points of your Main Phase during the turn in which this card was activated, and it does not target.

Yes, this means we don’t know which one is correct.