The riveting tale of a Kami in search of truth.

I don’t know if you guys know, but you can see the full size of the pics by right-clicking on them and clicking “view image”. 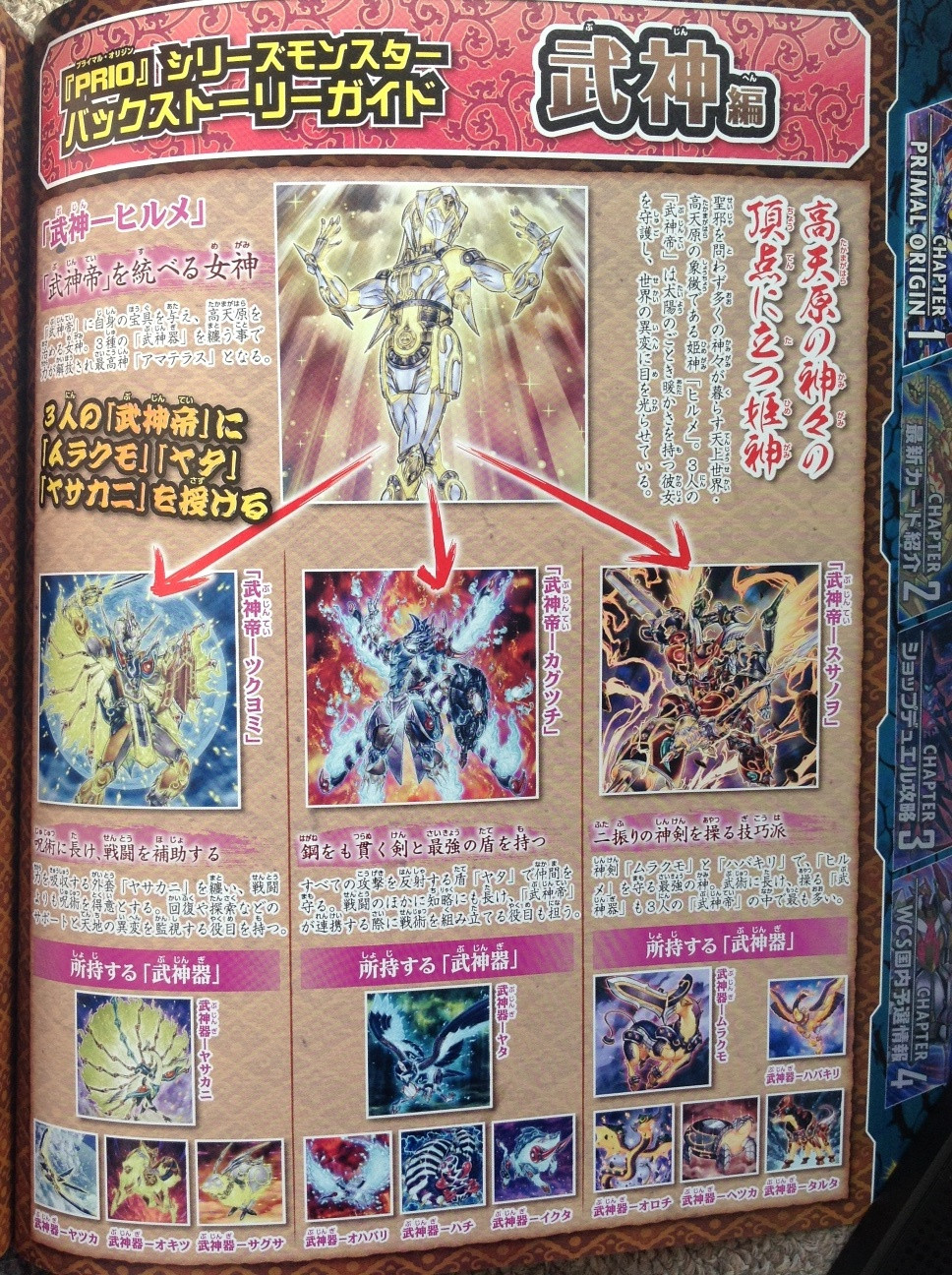 The Goddess who Stands at the Apex of the Takamagahara Kami

Regardless of good or evil, the World Above called Takamagahara is home to many different Kami, and the goddess who symbolizes this world itself is “Hirume”. It is the duty of the 3 “Bujintei” to not only protect “Hirume”, who is as warm as the very sun, but also to observe the disturbance going on in the world below.

“Bujin Hirume”
The goddess ruling over the “Bujintei” that gave them her own treasures. When the 3 “Bujingi” return to her, “Hirume” releases her powers and turns into the highest and most powerful Kami “Amaterasu”.

SHE GAVE TO THE THREE “BUJINTEI” “MURAKUMO”, “YATA”, AND “YASAKANI”

The strongest Kami who protects “Hirume” using his divine swords “Murakumo” and “Habakiri”. Well versed in the physical arts, he is also the “Bujintei” capable of wielding the most “Bujingi”.

The wielder of the steel-piercing blade and the strongest shield

He protects his comrades with his shield “Yata”, which is capable of reflecting any and all attacks. He is well versed in not only battles but also strategy, and holds the important position of strategizing combo-attacks for the “Bujintei”.

An expert in spells, his expertise in battle lies in support

Cloaked in the power-absorbing “Yasakani”, he is more at home using spells than battling. His role is in support such as healing, research, and overseeing the strange occurrences that have been happening. 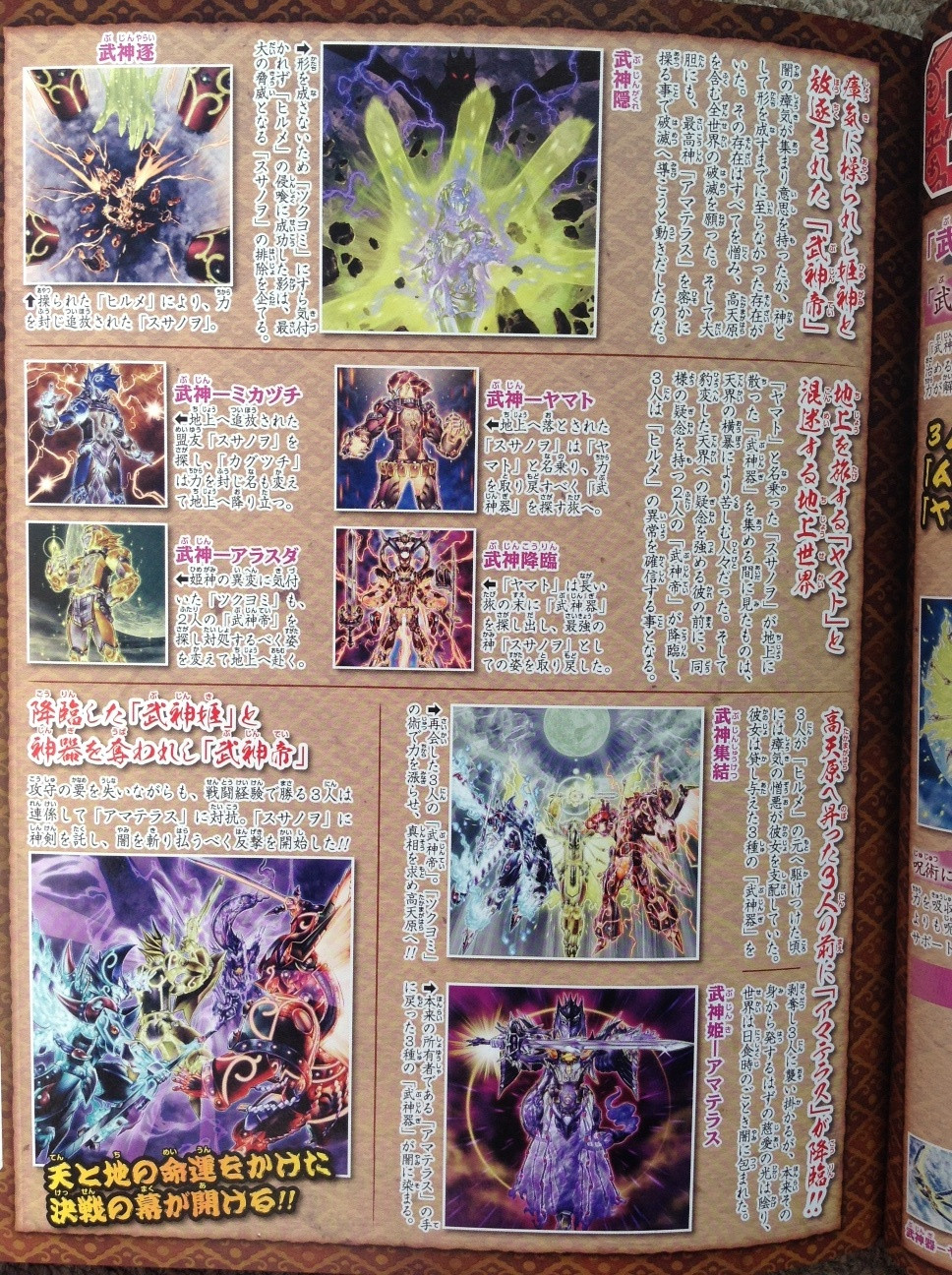 The Goddess controlled by Miasma and the Exiled “Bujintei”

A certain being somehow achieved consciousness by combining miasma of darkness into one, yet it cannot achieve a physical form that would turn into a Kami. This being despises all, and wishes to destroy the entire world, Takamagahara included. In a bold move, it controlled the highest Kami “Amaterasu” secretly and schemed to lead the world to destruction.

Because it has no true form of its own, the shadow managed to consume “Hirume” without “Tsukuyomi” noticing, and plot to eliminate its greatest threat, “Susanowo”.

“Susanowo” was exiled and had his power sealed away by a controlled “Hirume”.

“Susanowo”, who changed his name to “Yamato”, set out on a journey across the Surface World to find his scattered “Bujingi”. What he witnessed during his travels was a world of people suffering by the oppression of the Above World. As his suspicions about the sudden change in the actions of the Above World grew stronger, he was joined by the other two “Bujintei”, who also harbored suspicions about the current state of affairs. A trio again, they affirmed that something abnormal must have happened to “Hirume”.

“Susanowo” changed his name to “Yamato” and set out on a journey across the Surface World in search of his “Bujingi”.

After his long journey came to an end, “Yamato” regained his “Bujingi” and turned back into “Susanowo”, the strongest Kami.

To search for his exiled sworn friend, “Kagutsuchi” sealed away his own name and power, and set out to the Surface World.

Sensing the sudden change in “Hirume”, “Tsukuyomi” also changed his appearance to search for the other two “Bujintei”.

Amaterasu Descends in front of the Three who had returned to Takamagahara!!

As the three rushes to “Hirume’s” side, the hatred of the miasma completely consumed her. The three are then stripped of the “Bujingi” she had loaned them, and from her body the Radiance of Kindness lost its luster and turned shadowy, enveloping the world in the darkness of a solar eclipse.

The three “Bujintei” managed to regroup at last, and using the spell power of “Tsukyomi”, the three ascended back to Takamagahara in search of the truth!

The three “Bujingi” are corrupted by darkness after they returned to their original owner, “Amaterasu”.

Even if they lost their primary means of offense or defense, the three of them used their battle experience to fight against “Amaterasu” together. Entrusting “Susanowo” with the divine sword, the counterattack to slash away the darkness has begun!

THE CURTAIN RISES ON THIS FINAL BATTLE TO DETERMINE THE FATE OF THE HEAVENS AND THE EARTH!!