Today I’m going to talk to you about a vastly underrated card that could make a huge difference in your next tournament. A Spell Card that will single-handedly win you the Duel. A card with the power to simplify the most difficult aspects of competitive play. As you have probably guessed, the card I’m talking about is Cold Feet. 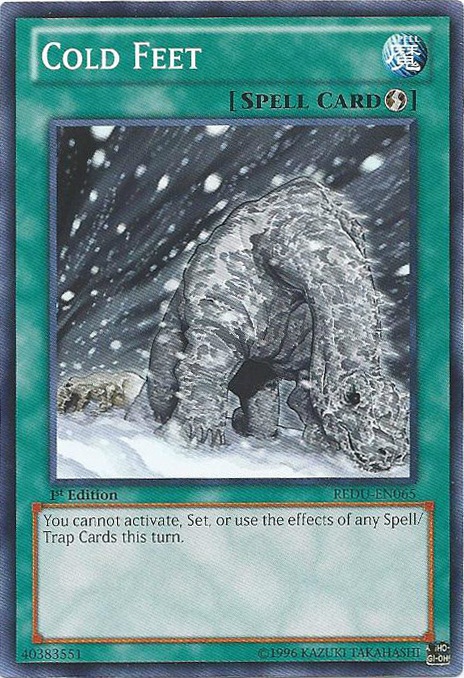 You cannot activate, Set, or use the effects of any Spell/Trap Cards this turn.

Just think about what this card could do for you. Many players out there have a frustrating time at major tournaments because they become overwhelmed by the stress of having to make precise plays round after round in order to match their opponents and come out on top. Every decision has to be perfect. When to use a card and when to hold on to it can make the difference between winning and losing. But not everybody has the mind of a pro. Not everyone knows when and how to make these difficult decisions. For these people, I present Cold Feet. You can rely on this card to make all the complex decisions for you.

Let’s talk about some popular cards that everyone is playing these days, which can be strengthened by including Cold Feet in your Deck. Many of these cards, despite their widespread use, are often used poorly by inexperienced players. Too often I see them blowing through their power cards, such as Dark Hole, Torrential Tribute, and Book of Moon, all at once, at times when the opponent is in a good position to recover. Without having to worry about these cards any longer, the opponent easily seizes control of the game and wins.

But with Cold Feet in hand, no longer! This beauty teaches you self-control, discipline, and restraint. It builds character. It keeps you from wasting your best Spell and Trap Cards during times when they’re better off saved for later. Take the stress out of making these difficult decisions, and use Cold Feet.

A final word of warning, though. Your opponent can easily counter this strategy with Mystical Refpanel. By using it against your Cold Feet, they will be unable to use their remaining Spell and Trap Cards for the rest of the turn, leaving them safe from making any strategic blunders while you are left vulnerable to your own poor decisions. They’re practically stealing your strategy! And you don’t want that to happen.