You might ask, why am I bringing such a silly headline today?

The Shonen Jump twitter account has brought a new promo poll to our attention, as noted in our most recent news article (Thanks, Ark, as always, for posting it). My team and I had an interesting conversation, and I’d like to share some of the products of that conversation with you. Join me beyond the break, and we’ll talk about how our votes can have some important ramifications.

Settled in? Good. This won’t take too long.

The thing to keep in mind, though: for quite some time now, cards released as Shonen Jump promos through this venue haven’t just been voted on by players, they’ve also lacked an equivalent means of distribution outside of certain territories. 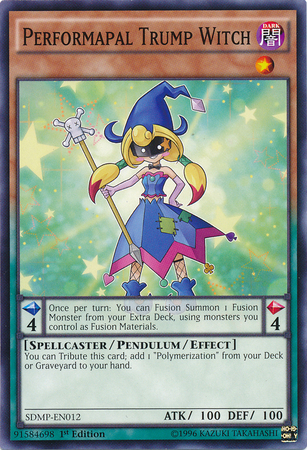 In short, when you’re voting in something like this, you’re voting for places like my home country, the USA, to get a nice card – but because of business difficulties and prior arrangements, other places in the TCG won’t be able to enjoy the chosen card for a longer time.

Differences like this have had ramifications: my team and I remember when Europe not-having-a-Crab-King helped give Apoqliphort Killer additional playability over there, especially once TurboKiller variants became possible. 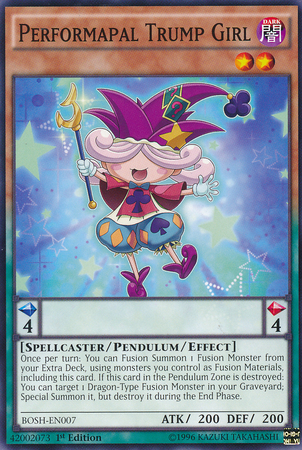 So, rather than try to get a specific new card for myself, I decided to cast my vote in a way that would bring a new card over as a promo solely for collection purposes, while minimizing chances of the chosen promo influencing competitive play.

I voted for the card that the poll calls “Performapal Trumpanda.”

I feel that, in this case, this vote I’ve cast helps everyone enjoy the game, at no one else’s expense.

Of the Organization members who have voted, I believe they’ve nearly all followed suit, for the same reasons. This doesn’t seem like a case where this poll vote is the only way for us to get these cards, either: it doesn’t feel to us like we’re losing anything by voting this way.

I do know I was kinda sad for some of my EU friends when Frightfur Tiger became an SJ promo, because they couldn’t get it – despite, of course, the fact that I was happy to get a Tiger myself. Thank goodness there was room for Tiger in their DOCS-SE.

The lesson I want you to take from this is simple: vote the way your heart wants you to, but don’t forget that there are consequences that everyone must deal with when the poll ends.

I would like for US and EU to receive the other four cards in worldwide releases, so I’ve chosen Trumpanda in this poll.

I’ve Stumped The Trumpanda, And So Can You~!