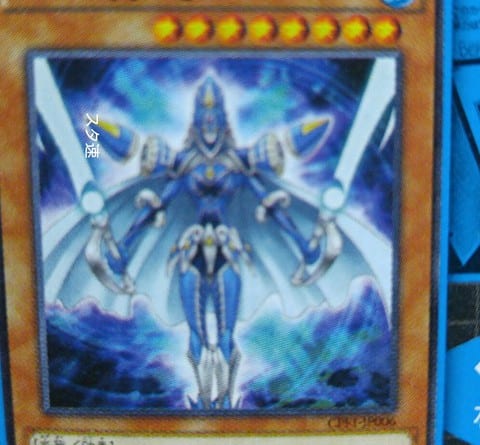 Performapal Corn
LIGHT/LV3/Beast-Warrior/Effect
600 / 1000
1. Once per turn, during your Main Phase, if this card was Normal or Special Summoned this turn: You can target 1 “Performapal” monster with 1000 or lower attack that you control; change that face-up Attack Position monster and this face-up Attack Position card to Defense Position, and if you do, add 1 “Odd-Eyes” monster from your deck to hand.
2. During your opponent’s turn: You can banish this card and a “Performapal” monster except “Performapal Corn” from your graveyard; gain 500 Life Points. Number 100: Numeron Dragon
LIGHT/RANK1/Dragon/Xyz/Effect/0/0
2 “Number” Xyz Monsters you control with the same Name and Rank
1. Once per turn: you can detach 1 Xyz Material from this card; Increase this card’s attack by the total Ranks of all Xyz monsters on the field x 1000 until the end of your opponent’s turn.
2. When this card is destroyed by a card effect: You can destroy all monsters on the field. Then, each player Sets 1 Spell or Trap card from their Graveyard.
3. When your opponent declares a direct attack, if this card is in the Graveyard and you have no cards in your hand or on the field: You can Special Summon this card. The Tripping Mercury
WATER/LV8/Aqua/Effect/2000/2000
1. When this card is Tribute Summoned: You can change all monsters on the field to face-up attack position.
2. You can Tribute 3 monsters to Summon this card.
3. If this card was summoned by Tributing 3 Monsters, as long as this card is face-up on the field, decrease the ATK of all monsters your opponent controls by their original ATK.
4. This card can attack twice during each Battle Phase.