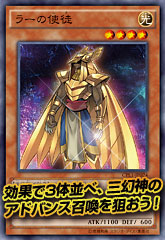 Extrapolating from the article, the effect appears to be (as in not confirmed yet because the effect is blocked again):

The unconfirmed stuff include how many times you can use the effect per turn (as in is there a name-based once per turn?), and what other effects (if any) it will have. The negative effects are confirmed, possibly worded differently.