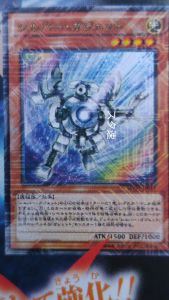 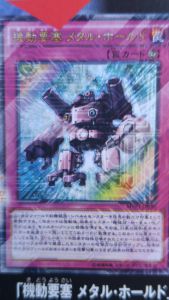 Kidou Yousai Metal Hold / Metalhold the Mobile Fortified Fortress OR Metalhold the Moving Battlement
Continuous Trap Card
(1) Activate this card by targeting any number of Level 4 Machine-Type monsters you control; Special Summon this card as an Effect Monster to your Monster Zone (Machine-Type/EARTH/Level 4/ATK 0/DEF 0), then equip those targeted face-up monsters to this monster. (This card is also still a Trap Card).
(2) If Special Summoned by its own effect, this card gains ATK equal to the combined original ATK of the monsters equipped to it by its own effect, also your opponent cannot target other monsters you control for attacks or with card effects. 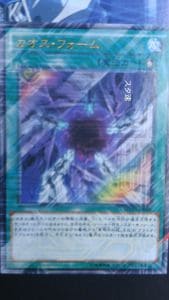 Chaos Form
Ritual Spell Card
This card can be used to Ritual Summon any “Chaos” or “Black Luster” Ritual Monster.
(1) Tribute monsters from your hand or field, and/or banish “Blue-Eyes White Dragon(s)” or “Dark Magician(s)” from your Graveyard, and after that, Ritual Summon from your hand 1 “Chaos” or “Black Luster” Ritual Monster whose Level exactly equals the total Levels of those monsters.

CONJUNCTION NOTE: this is lifting a trick from Luminous Dragon Ritual’s second effect, by forcing the rules of the conjunction “and” while making events non-simultaneous through the use of “after that”. The word “then” used on rituals like Nekroz Mirror is wrong, because if you can’t Summon, you aren’t meant to consume anything for the Ritual. 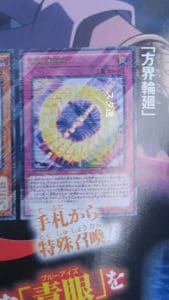 Houkai Rin’ne / Houkai Reincarnation
Normal Trap Card
(1) When an opponent’s monster declares a direct attack: Target that 1 attacking monster; your opponent Special Summons in Attack Position as many monsters with its name as possible from their hand, Deck, and/or Graveyard, and if they do, have the targeted monster’s ATK and the Summoned monsters’ ATKs become 0, and if you do, place 1 Houkai Counter on those monsters, then Special Summon 1 Level 4 or lower “Houkai” monster from your hand, ignoring its Summoning conditions. Monsters with Houkai Counters cannot attack, also their effects are negated.