So, you felt Chaos Form didn’t work with enough cards? The first blurp from V Jump gives you one more to use. 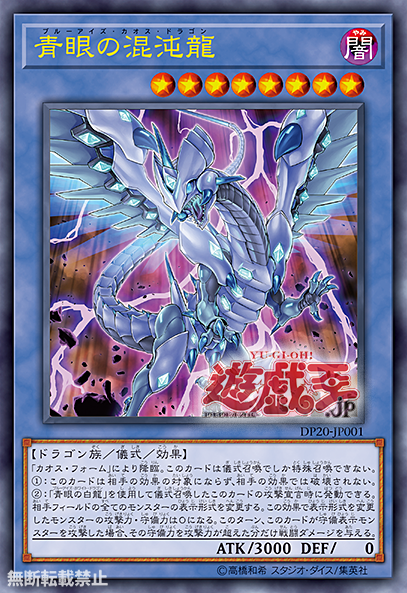 DP20-JP001 青眼の混沌龍 Blue-Eyes Chaos Dragon
Level 8 DARK Dragon Ritual Effect Monster
ATK 3000
DEF 0
You can Ritual Summon this card with “Chaos Form”. Must be Ritual Summoned.
(1) Cannot be targeted by, or destroyed by, an opponent’s card effect.
(2) When this card declares an attack, if this card was Ritual Summoned using “Blue-Eyes White Dragon”: You can activate this effect; if this card attacks a Defense Position monster this turn, inflict piercing battle damage, also change the battle positions of as many monsters your opponent controls as possible, and if you do, the ATK/DEF of each changed monster becomes 0.