For the person who has everything, but wants the Crimson Dragon or play Frightfurs. 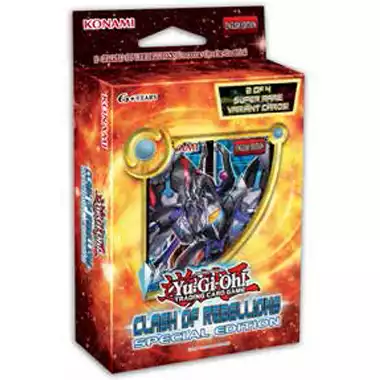 The Clash of Rebellions Special Edition is the ultimate value for Duelists!

In addition to 3 booster packs of Clash of Rebellions, each box is guaranteed 1 of 2 Super Rare variant cards, PLUS 1 of 2 foil version preview cards of non-foil cards from the upcoming January booster set!

Clash of Rebellions includes exciting new Deck themes and new support cards for other popular Decks. New themes include the fiery Igknight Monsters that burn up their own men to Summon gigantic soldiers, flowery Aromages that pump up your Life Points and gain extra powers while you’re ahead, and a new Deck theme based on one of the most popular American fairy tales ever known that will continue to be supported in subsequent sets.

You’re guaranteed one of these cards in your Special Edition box, either Ultimaya Tzolkin or Frightfur Tiger, plus 1 of 2 foil preview cards from the January booster, AND the 27 cards you pull from your 3 booster packs, loaded up with Igknights, Aromages, Kozmo, Red-Eyes, and more!

Clash of Rebellions Special Edition is a great way to power up your current Deck, or build a whole new Deck, for less than it would cost to buy 3 individual booster packs!