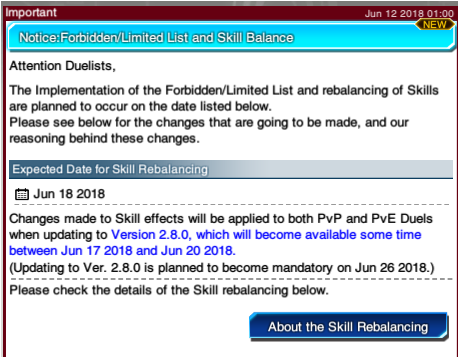 Around June 18th, Skills will be rebalanced. 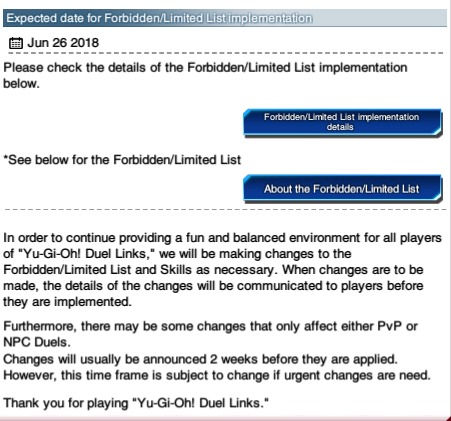 June 26th, Konami will be enforcing a new Forbidden and Limited List. 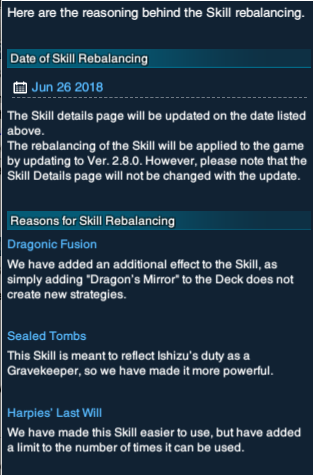 Dragonic Fusion, Chazz’s Skill will be updated to make it actually create new strategies and not just give you a free Five-Headed Dragon.

Ishizu’s skill will be strengthened to reflect her duty as a Gravekeeper.

Harpies’ Last Will will be made easier to use but usage amount is severely lowered. 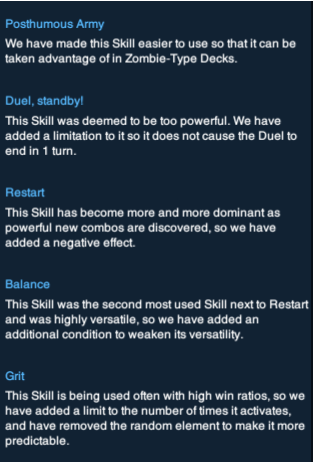 Posthumons Army will be made stronger to take advantage of Zombie tactics.

“Duel, standby!”, “Restart”, and “Balance” and “Grit”” due to their prevalence in PVP are all getting nerfed. 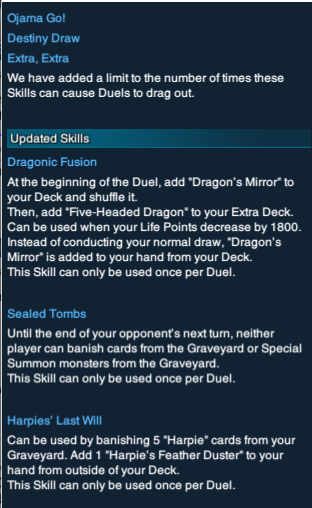 “Ojama Go!”, “Destiny Draw” and “Extra, Extra” are being nerfed due to dragging out Duels.

Dragonic Fusion
At the beginning of the Duel, add “Dragon’s Mirror” to your Deck and shuffle it. Then, add “Five-Headed Dragon” to your Extra Deck. Can be used when your Life Points decrease by 1800. Instead of conducting your Normal Draw, “Dragon’s Mirror” is added to your hand from your Deck. This skill can only be used once per Duel.

Harpies’ Last Will
Can be used by banishing 5 “Harpie” cards from your Graveyard. Add 1 “Harpie’s Feather Duster” to your hand from outside of your Deck. This Skill can only be used once per Duel. 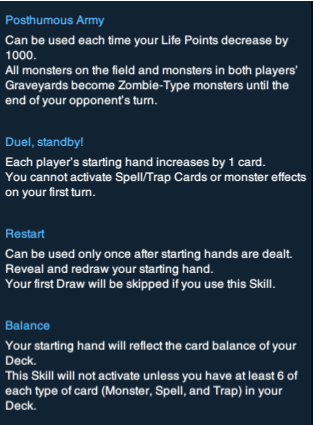 Posthumous Army
Can be used each time your Lifepoints decrease by 1000. All monsters on the field and monsters in both players’ Graveyards become Zombie-Type monsters until the end of your opponnet’s turn.

Restart
Can be used only once after starting hands are dealt. Reveal and redraw your starting hand. Your first draw will be skipped if you use this Skill.

Balance
Your starting hand will reflect the card balance of your Deck. This skill will not activate unless you have at least 6 of each type of card (Monster, Spell and Trap) in your Deck. 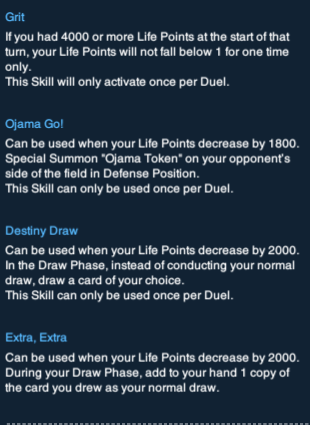 Grit
If you had 4000 or more Life Points at the start of that turn, your Life Points will not fall below 1 for one time only. This Skill will only activate once per Duel.

Ojama Go!
Can be used when your Life Points decrease by 1800. Special Summon “Ojama Token” on your opponent’s side of the field in Defense Position.

Destiny Draw
Can be used when your Life Points decrease by 2000. In the draw phase, instead of conducting your normal draw, draw a card of your choice. This Skill can only be used once per Duel.

Extra, Extra
Can be used when your Life Points decrease by 200. During your Draw Phase, add to your hand 1 copy of the card you drew as your normal draw. 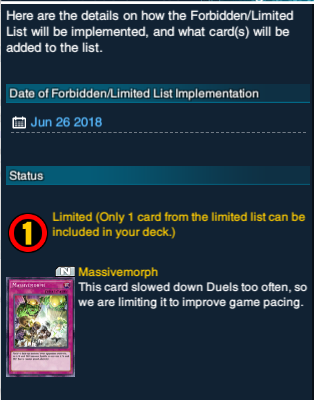 Card was used in Stall strategies that dragged out PVP Duels. 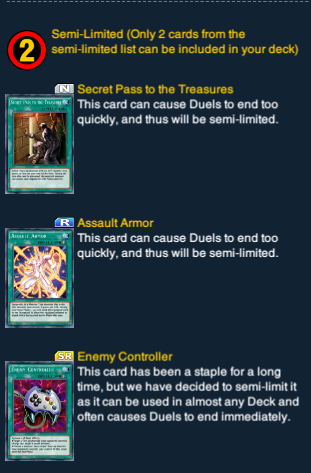 Secret Pass to the Teasures
Used in One Turn Kill Decks with Silent Swordsman.

Enemy Controller
Its secondary effect of taking control of a monster was increasingly becoming a One Turn Kill tool, despite its use as a technical defense card. 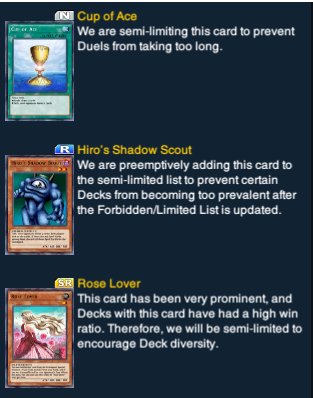 Rose Lover
Card was extremely prominent in Sylvan and Aromage Decks, and is being hit to prevent those Decks from becoming too common and overpowered going forward with the release of new cards.

Amazoness Onslaught
A key card in Amazoness Decks that make it possible for them to function in tournament environments with their ability to clear opponent fields. 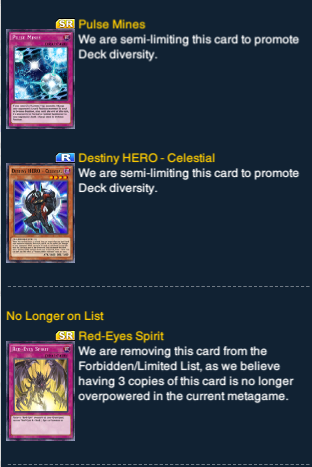 Pulse Mines
A major tool on Geargia. It’s being hit along with Enemy Controller to make them weaker.