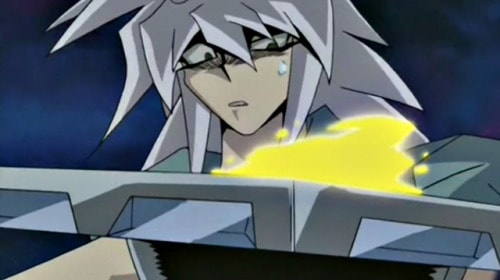 The legendary schemer, RPG Dungeon Master and king of thieves joins the gate. 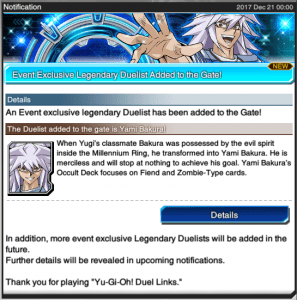 Yami Bakura has been added to the Gate. The description re-iterates he runs an Occult Deck with Fiend and Zombie monsters. 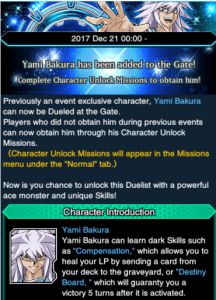 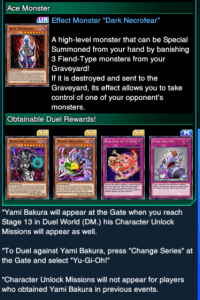 Yami Bakura unlocks at the Gate when you reach Stage 13.

His Unlock Missions are:

And as a reminder for those curious about Drops:

Compensation
Can be used each time your Life Points decreases by 1000. Send the card on the top of your Deck to the Graveyard, and recover 300 LP.

Draw Sense: DARK
Can be used each time your Life Points decrease by 1500.
In the Draw Phase, instead of doing a normal draw, draw a random DARK-attribute monster.

Tether of Defeat
Can be used when one of the opponent’s monster is destroyed in battle. The Top card from either your or the opponents deck is sent to the graveyard.

Fiend Farewell
Can be used when one of your monsters is destroyed by battle. 1 random Fiend-Type monster from your Deck is sent to the graveyard.