The heroine of the Abyss Actor troupe has been revealed by Konami via their official Japanese YGO Twitter! 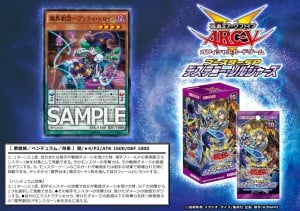 SPDS-JP021 魔界劇団－プリティ・ヒロイン Makai Gekidan – Pretty Heroine (Abyss Actor – Pretty Heroine)
Level 4 DARK Fiend-Type Pendulum Effect Monster
ATK 1500
DEF 1000
Pendulum Scale: 2
Pendulum Effect:
(1) Once per turn, when you take battle damage from the attack of an opponent’s monster: Choose and activate one of the following effects.
● That attacking monster loses ATK equal to the battle damage you took.
● Add 1 “Abyss Actor” Pendulum Monster face-up in your Extra Deck whose ATK is less than or equal to the battle damage you took to your hand.
Monster Effect:
(1) Once per turn, when either player takes battle damage: You can target 1 face-up monster your opponent controls; it loses ATK equal to the battle damage taken.
(2) When this monster is destroyed by battle or your opponent’s card effect: You can Set 1 “Abyss Script” Spell Card directly from your Deck.