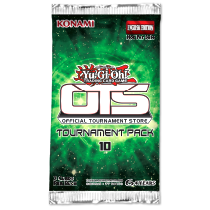 Focusing on cards from the past several months, including Salamangreat.

You can find awesome foil upgrades for competitive Decks like Salamangreat, Sky Striker, Thunder Dragon, and Orcust… including Ultimate Rare Galatea, the Orcust Automaton! With a load of Super Rares ranging from Salamangreat Sunlight Wolf to Hiita the Fire Charmer, Ablaze and even a Trickstar Token, there is a lot to love in OTS Tournament Pack 10!