The first of the August YGO Promos has been revealed, and it’s a Performapal for Saikyo Jump! 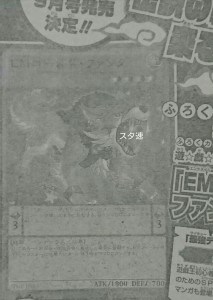 Entermate Gold Fang / Performapal Gold Fang
Level 4 LIGHT Beast-Type Pendulum Effect Monster
ATK 1800
DEF 700
Pendulum Scale: 3
Pendulum Effect:
(1) Once per turn, if a “Performapal” monster you control destroys an opponent’s monster in battle: inflict 1000 damage to the opponent.
Monster Effect:
(1) If this card is Normal or Special Summoned: all “Performapal” monsters you control gain 200 ATK until the end of this turn. I think that’s what it says