Or: Why aren’t you being Salamander the Great

“Salamangreat” are monsters used by “Soulburner” who appears in the animated series “Yu-Gi-Oh! VRAINS”.

Let’s check them out below!

Reveal Its True Value By Summoning It Using A Monster With The Same Name As A Material!! Its Effect To Disrupt The Spell & Trap Zone Is Also Powerful!! 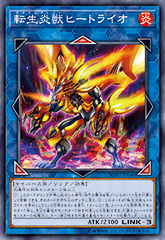 Salamangreat Heatleo
[ATK 2300]
2+ FIRE Effect Monsters
If this card is Link Summoned: You can target 1 card in your opponent’s Spell & Trap Zone; shuffle it into the Deck. Once per turn, if this card was Link Summoned using “Salamangreat Heatleo” as material: You can target 1 face-up monster on the field and 1 monster in your GY; the first target’s ATK becomes the same as the second target’s ATK, until the end of this turn.

Destroy An Opponent’s Monster And Inflict Effect Damage!! By Calling It Through Reincarnation, You Can Instantly Wipe Out Your Opponent’s Special Summoned Monsters! 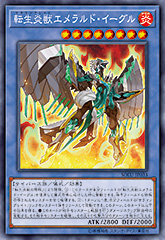 With effects that activate in the hand and GY, you can fight by constantly Link Summoning and Ritual Summoning!

It Greatly Supports Expanding The Board With Two Effects To Special Summon Itself From The Hand!!

When You Summon It, You Have A Chance To Add A “Salamangreat” Card To The Hand! Its Effect To Special Summon Itself Is Also Strong!

It Lets You Reuse Related Spells & Traps In The GY & Has An Effect That Special Summons Itself From The GY!

It Can Special Summon Itself From The GY To A Zone A “Salamangreat” Link Monster Points To!

Also many Spell & Trap Cards that support the deployment of “Salamangreat” monsters make their debut! There’s a Field Spell Card & Continuous Spell Card whose effects that can be used each turn, that together allow you to call Ace Monsters with the same name, allowing you to demonstrate their true power!

Link Summon A “Salamangreat” Link Monster Use A Monster With The Same Name!

A Ritual Spell Card That Lets You Use Allies In The GY Rather Than Tributing! Even If Your Opponent Destroys It, A Ritual Monster Appears!!

Rise of the Salamangreat
[Ritual Spell Card]
This card can be used to Ritual Summon any “Salamangreat” Ritual Monster. You must also Tribute monsters from your hand or field whose total Levels equal or exceed the Level of the Ritual Monster you Ritual Summon. If you control a FIRE Link Monster, you can also shuffle “Salamangreat” monsters from your GY into the Deck. If this card in its owner’s possession is destroyed by an opponent’s card effect: You can Special Summon 1 “Salamangreat Emerald Eagle” from your hand, ignoring its Summoning conditions.

Call Allies From The Hand Or GY!! With A “Salamangreat Heatleo” That’s Shown Its Full Power, You Can Call Forth Up To 3 Cards!!

It Has Two Powerful Effects That Let You Send Allies To The GY To Prepare For Combos By Altering Your Hand With Draws!

Choose and experience either “Salamangreat” or “Galaxy” Decks! Joining the event is free, and there’s even an lecture from the staff about how to use the Deck before playing!

Go the Deck Experience event where you can experience new cards! 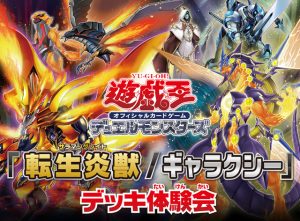 The “Salamangreat/Galaxy” Deck Experience Event is being held! [Until July 13th, 2018]

Soul Fusion
[On Sale July 14th, 2018]
Besides cards that made their appearance in the animated series “Yu-Gi-Oh! VRAINS”, this main pack (the second of the 2018 fiscal year) contains many cards vital for all sorts of Duelists! A new Fusion Monster is included that belongs to the general Cyberse type used by Playameker! At the same time, many cards that support Fusion Summoning are included! And also keep your eye on the “Salamangreat” used by Soulburner! Along with new series, there are new cards for existing series and themes for players to enjoy!
[ To The Product Page ]