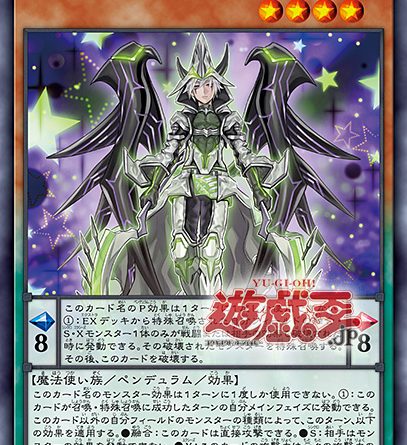 I just got back from working at a 500+ player regional, and boy are my arms tired 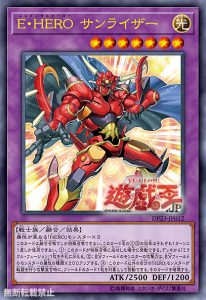 DP23-JP012
Elemental HERO Sunriser
Level 7 LIGHT Warrior Fusion Effect Monster
2500/1200
Fusion Materials: 2 “HERO” monsters with different Attributes
Must be Fusion Summoned.
You can use each effect among the (1)st and (3)rd effects with this card’s name only once per turn.
(1) If this card is Special Summoned: You can add 1 “Miracle Fusion” from your Deck to your hand.
(2) Monsters you control gain 200 ATK for each different Attribute among the monsters you control.
(3) When an attack is declared involving another “HERO” monster you control: You can target 1 card on the field; destroy it. 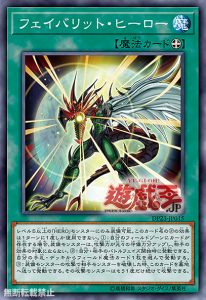 DP23-JP015
Favorite Hero
Equip Spell
Equip only to a Level 5 or higher “HERO” monster.
You can use the (2)nd effect with this card’s name only once per turn.
(1) While there is a card in your Field Zone, the equipped monster gains ATK equal to its original DEF, also your opponent cannot target it with card effects.
(2) At the start of the Battle Phase: You can activate 1 Field Spell from your hand or Deck.
(3) When the attacking equipped monster destroys an opponent’s monster by battle: You can send this card to the GY; the monster that attacked can make a second attack in a row. 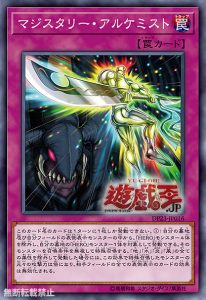 DP23-JP016
Magistry Alchemist
Normal Trap
You can only activate 1 card with this card name per turn.
(1) Banish 4 “HERO” monsters from your GY and/or face-up field, then target 1 “HERO” monster in your GY; Special Summon it, ignoring its Summoning conditions, and if EARTH, WATER, FIRE, and WIND Attributes are all among the monsters you banished to activate this effect, double the Summoned monster’s original ATK, and if you do that, negate the effects of all face-up cards your opponent currently controls. 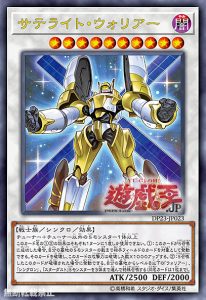 DP23-JP023
Satellite Warrior
Level 10 DARK Warrior Synchro Effect Monster
2500/2000
Synchro Materials: 1 Tuner + 1+ non-Tuner Synchro Monsters
You can use each effect among the (1)st and (2)nd effects with this card’s name only once per turn.
(1) If this card is Synchro Summoned: You can target cards your opponent controls up to the number of Synchro Monsters in your GY; destroy them, and if you do, this card gains 1000 ATK for each card destroyed by this effect.
(2) If this Synchro Summoned card is destroyed: You can Special Summon up to 3 Level 8 or lower “Warrior”, “Synchron”, and/or “Stardust” Synchro Monsters with different names from your GY. 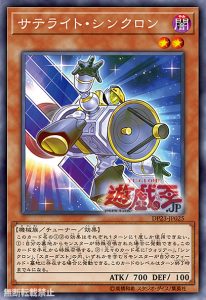 DP23-JP025
Satellite Synchron
Level 2 DARK Machine Tuner Effect Monster
700/100
You can use each effect among the (1)st and (2)nd effects with this card’s name only once per turn.
(1) If a monster(s) is Special Summoned from your GY: You can Special Summon this card from your hand.
(2) If there is a Synchro Monster(s) on your field and/or in your GY with “Warrior”, “Synchron”, and/or “Stardust” in its original name: You can make this card’s Level become 4 until the end of this turn. 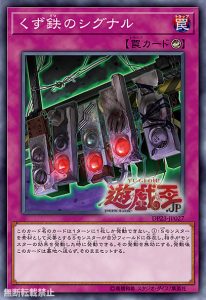 DP23-JP027
Kuzu-Tetsu no Signal / Scrap-Iron Signal
Counter Trap
You can only activate 1 card with this card name per turn.
(1) When your opponent activates a monster effect while you control a Synchro Monster that requires a Synchro Monster(s) as material: Negate the activation, also, after that, Set this card face-down instead of sending it to the GY. 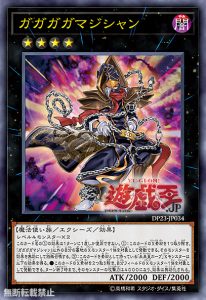 DP23-JP034
Gagagaga Magician
Rank 4 DARK Spellcaster Xyz Effect Monster
2000/2000
Xyz Materials: 2 Level 4 monsters
You can use the (1)st effect with this card’s name only once per turn.
(1) You can detach 1 material from this card, then target 1 Xyz Monster in your GY, except “Gagagaga Magician”; Special Summon it, but negate its effects.
(2) A “Utopic Future” Xyz Monster that has this card as material gains this effect.
● You can detach 2 materials from this card, then target 1 Xyz Monster you control; until the end of this turn, its ATK becomes 4000, but negate its effects. 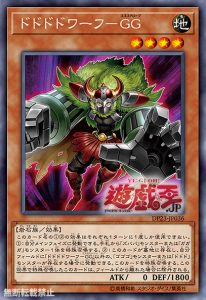 DP23-JP036
Dododo Dwarf – Gogogo Glove
Level 4 EARTH Rock Effect Monster
0/1800
You can use each effect among the (1)st and (2)nd effects with this card’s name only once per turn.
(1) During your Main Phase: You can Special Summon 1 “Zubaba” or “Gagaga” monster from your hand.
(2) If this card is in your GY, and you control a “Gogogo” or “Dododo” monster other than “Dododo Dwarf – Gogogo Glove”: You can Special Summon this card, but banish it when it leaves the field. 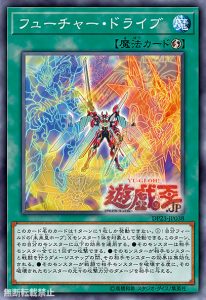 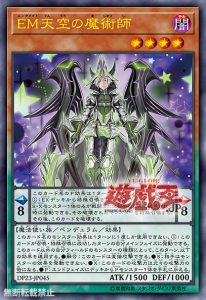 DP23-JP045
Entermate Tenkuu no Majutsushi / Performapal Empyrean Magician
Level 4 DARK Spellcaster Pendulum Effect Monster
Pendulum Scale 8
1500/1000
Pendulum Effect:
You can activate the [(1)st] with this card’s name only once per turn.
(1) When exactly 1 Fusion, Synchro, or Xyz Monster you control that was Special Summoned from the Extra Deck is destroyed by battle or an opponent’s card effect: You can Special Summon the destroyed monster, then destroy this card.
Monster Effect:
You can activate the [(1)st] monster effect with this card’s name only once per turn.
(1) During your Main Phase, if this card was Normal or Special Summoned this turn: You can activate this effect; apply these effects for the rest of this turn, depending on the monster card types among the other monsters you currently control.
● Fusion: This card can attack directly.
● Synchro: Your opponent cannot activate monster effects.
● Xyz: This card’s ATK becomes double its original ATK.
● Pendulum: During the End Phase, add 1 Pendulum Monster from your Deck to your hand. 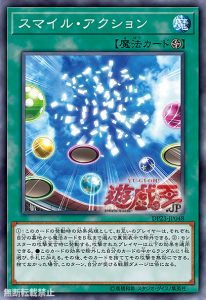 DP23-JP048
Smile Action
Field Spell
(1) When this card resolves, each player can banish up to 5 Spells from their GY, face-down.
(2) When any monster declares an attack: Activate this effect; the attacked player can apply this effect.
● Randomly add to your hand 1 of your cards banished by this card’s effect, then you can discard it, and if you do, negate the attack. If you do not discard it, any battle damage you take for the rest of this turn is doubled. 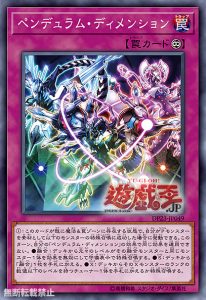 DP23-JP049
Pendulum Dimension
Continuous Trap
(1) When you Special Summon a monster of the following types using a Pendulum Monster(s) as material while this card is in the Spell & Trap Zone: You can activate the appropriate effect, but you cannot apply the same effect of “Pendulum Dimension” again this turn.
● Fusion: Special Summon 1 monster from your Deck in Defense Position with the same original Level as that Fusion Monster, but negate its effects.
● Synchro: Add 1 “Polymerization” from your Deck to your hand.
● Xyz: Take 1 Tuner from your Deck whose Level is lower than or equal to that Xyz Monster’s Rank, and either add it to your hand or Special Summon it.