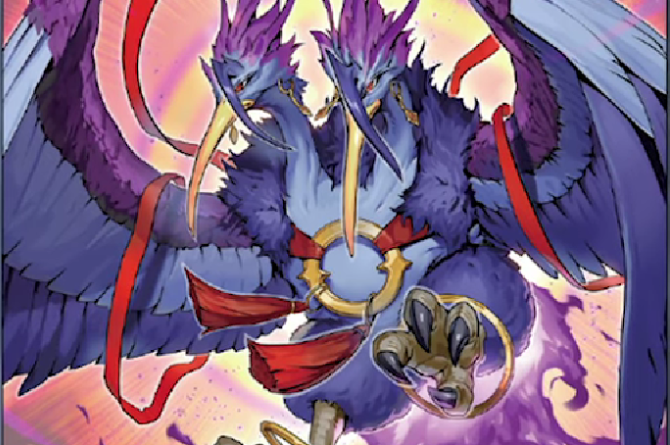 Draw 1 off nearly anything! 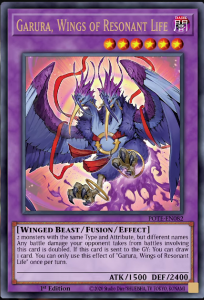 POTE-EN082 Garura, Wings of Resonant Life
Level 6 DARK Winged Beast/Fusion/Effect 1500/2400
2 monsters with the same Type and Attribute, but different names
Any battle damage your opponent takes from battles involving this card is doubled. If this card is sent to the GY: You can draw 1 card. You can only use this effect of “Garura, Wings of Resonant Life” once per turn. 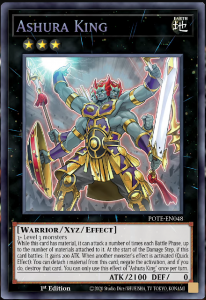 POTE-EN048 Ashura King
Rank 3 EARTH Warrior/Xyz/Effect 2100/0
3+ Level 3 monsters
While this card has material, it can attack a number of times each Battle Phase, up to the number of materials attached to it. At the start of the Damage Step, if this card battles: it gains 200 ATK. When another monster’s effect is activated (Quick Effect): You can detach 1 material from this card; negate the activation, and if you do, destroy that card. You can only use this effect of “Ashura King” once per turn. 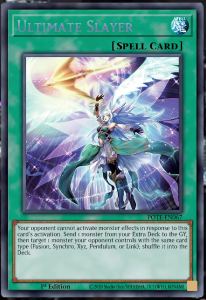 POTE-EN067 Ultimate Slayer
Normal Spell
Your opponent cannot activate monster effects in response to this card’s activation. Send 1 monster from your Extra Deck to the GY, then target 1 monster your opponent controls with the same card type (Fusion, Synchro, Xyz, Pendulum, or Link); Shuffle it into the Deck. 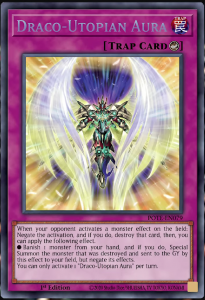 POTE-EN079 Draco-Utopian Aura
Counter Trap
When your opponent activates a monster effect on the field: Negate the activation, and if you do, destroy that card, then, you can apply the following effect.
• Banish 1 monster from your hand, and if you do, Special Summon the monster that was destroyed and sent to the GY by this effect to your field, but negate it’s effects.
You can only activate 1 “Draco-Utopian Aura” per turn. 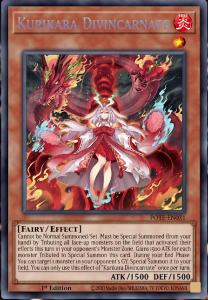 POTE-EN031 Kurikara Divincarnate
Level 1 FIRE Fairy/Effect 1500/1500
Cannot be Normal Summoned/Set. Must by Special Summoned (from your hand) by Tributing all face-up monsters on the field that activated their effects this turn in your opponent’s Monster Zone. Gains 1500 ATK for each monster Tributed to Special Summon this card. During the End Phase: You can target 1 monster in your opponent’s GY; Special Summon it to your field. You can only use this effect of “Kurikara Divincarnate” once per turn.