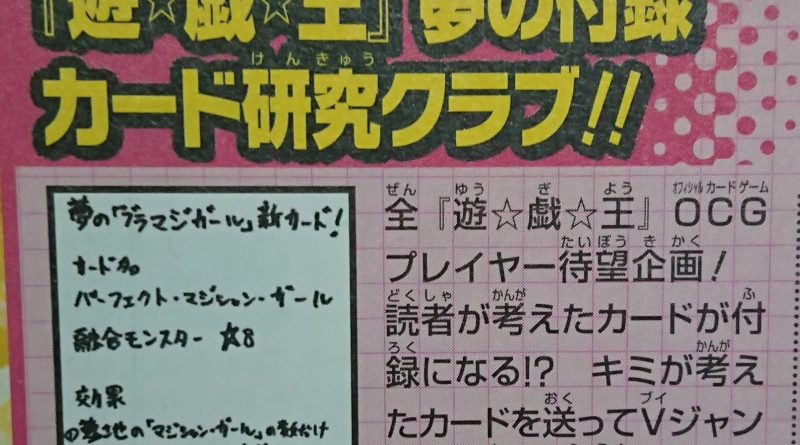 10 themes to choose from to receive a new card in the future. 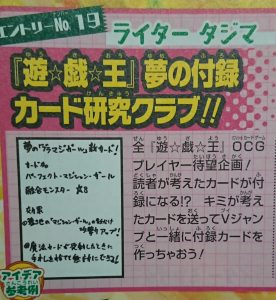 The project all “Yu-Gi-Oh! Official Card Game” players has arrived! The card players most want will become a promo!? Send the card you imagine and it might become a promo card with V Jump! 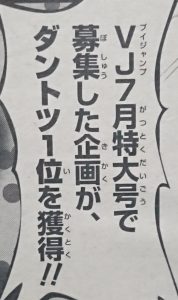 Choose for #1 from this issue of V Jump!! 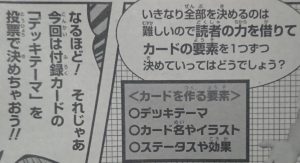 Since it is difficult to determine immediately, how do we decide the elements of the card?

Then, let’s see, we’ll decide what card to include via “Deck Thee” for the promo card! 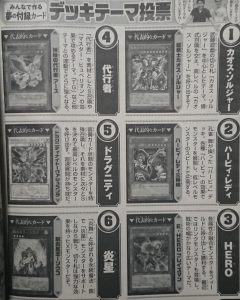 (2) “Harpie Lady”
The “Harpie” Deck used by Kujaku Mai. By using the effects of the various “Harpie” monsters to call each other rapidly, allowing you to crush your opponent with high speed low level monsters.

(3) “HERO”
Call Fusion Monsters of various attributes in order to win. Recently Link Monsters for them have also appeared, making it a theme with quite a broad range of tactics.

(4) “Agent”
A theme that attacks by using the effect of “Master Hyperion” while using the “Agents” as materials for Synchro Summon. It also strongly interlocks with other themes such as “T.G.”.

(5) “Dragunity”
A Deck that calls out high Level monsters via Synchro due to monsters that can make themselves material by Special Summoning themselves from being Equip Cards.

(6) “Fire Fist”
A Deck that fights with with “Fire Fist” monsters that are supported by “Fire Formation” Continuous Spell & Trap Cards. Its ace monsters are Xyz Monsters with incredibly potent effects. 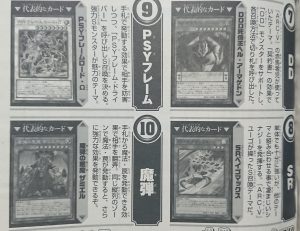 (7) “D/D”
A themed used by Akaba Reiji from “ARC-V”. The “D/D” monsters are supported by the effects of “Dark Contracts”, allowing to call forth ace monsters via various Summoning Methods.

(8) “Speedroid”
While strong on its own, it shows incredible synergy when combined with other themes. It’s a Synchro Summoning theme used by Yugo from “ARC-V”

(9) “PSY-Frame”
It aims to Synchro Summon “PSY-Frame Driver” while disrupting the opponent with effects that activate from the hand. The charm of this theme is its powerful “Synchro” monsters.

Votes will be decided by mail-in ballots and Yu-Gi-Oh!.jp polls.