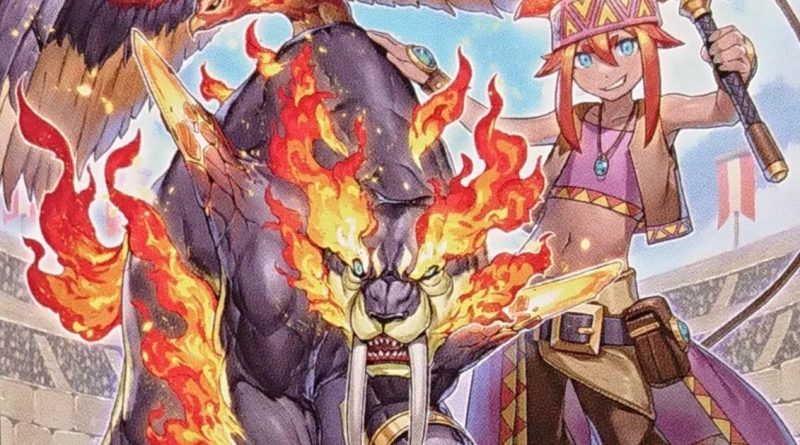 Adamancipator, why does your mom let you have all the support? 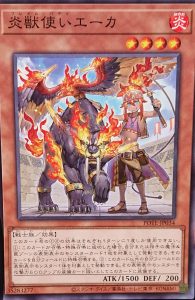 POTE-JP034 炎獣使い（フレイム・バディ）エーカ Flame Buddy Erca (Flame Buddy Erca the Fire Beast Tamer)
Level 4 FIRE Warrior Effect Monster
ATK 1500
DEF 200
You can only use the (1) and (2) effects of this card’s name once per turn each.
(1) If this card is Normal or Special Summoned: You can target 1 face-up Monster Card in either player’s Spell/Trap Zone; Special Summon it to your field.
(2) You can target 1 other face-up monster you control; equip it to this card as an Equip Spell that gives 500 ATK. 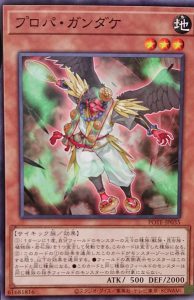 POTE-JP035 プロパ・ガンダケ Propa Gandake
Level 3 EARTH Psychic Effect Monster
ATK 500
DEF 2000
(1) Once per turn: You can declare 1 Original Type (Beast, Insect, Plant or Rock) from among monsters you control; this card becomes the declared Type.
(2) If you control this card that has changed its type by its (1) effect in a Monster Zone, apply the following effects.
• Face-up monsters become the same Type as this card.
• Monsters on the field of the same Type as this card cannot be targeted by the effects of monsters your opponent controls of the same Type.

Note: This card’s name seems to be Propaganda plus Gantake (A type of Mushroom), and likely a bunch of other wordplays. I’m gonna just. Leave it. 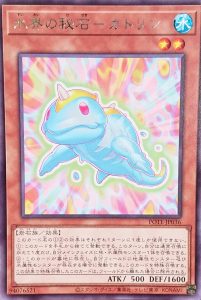 POTE-JP036 水界の秘石ーカトリン Suikai no Hiseki – Katrin (Hidden Jewel of the Hydrosphere – Katrin)
Level 2 WATER Rock Effect Monster
ATK 500
DEF 1600
You can only use the (1) and (2) effects of this card’s name once per turn each.
(1) You can discard this card; during your Main Phase this turn, you can Normal Summon 1 EARTH or WATER monster in addition to your Normal Summon/Set (you can only gain this effect once per turn).
(2) If you control an EARTH monster and a WATER monster while this card is in your GY: You can Special Summon this card, but banish it if it leaves the field.

Note: Katrin is a German spelling of the name Catherine, which has a complex history but for here, it likely means Purity. Hiseki can also mean “Stone Monument”.

POTE-JP038 悪醒師ナイトメルト Akuseishi Nightmelt (Evil-Awakening Master Nightmelt)
Level 4 WIND Psychic Effect Monster
ATK 1500
DEF 1500
You can only use the effect of this card’s name once per turn.
(1) You can Tribute 1 monster; Special Summon 1 monster with a different original name, but the same Original Type, Attribute, Level, ATK and DEF from your Deck OR if you Tributed a monster that was Special Summoned from the Extra Deck, you can Special Summon it from the Extra Deck instead. 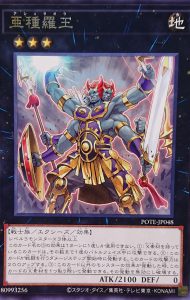 POTE-JP048 亜種羅王 Asura-Oh (Subspecies King Asura-Oh)
Rank 3 EARTH Warrior Xyz Effect Monster
ATK 2100
DEF 0
Materials: 3+ Level 3 monsters
You can use the (3)rd effect with this card’s name only once per turn.
(1) While this card has any number of materials, it can attack up to that many times during each Battle Phase.
(2) If this card battles, at the start of the Damage Step: this card gains 200 ATK.
(3) When another monster’s effect activates (Quick Effect): You can detach 1 material from this card; negate that activation, and if you do, destroy it.

Note: Asura is usually spelt as 阿修羅, which is just slapping together Kanji that sounds like the Hindu word. Here, they’ve replaced 阿修 with 亜種 (Subspecies). 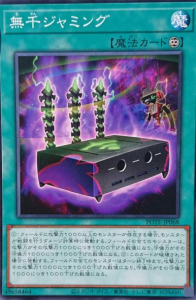 Note: This card’s name is a play on 無線 (Radio/Wireless) or 無銭 (Cost Free), the Musen here (無千) would be something like uncountable (Non-Thousand). 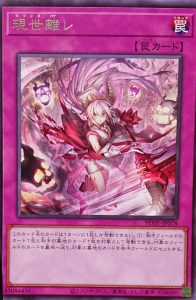 POTE-JP078 現世離レ Utsushiyo Hanare (Separation from the Realm of the Living/Ark: Sundered from Overroot)
Normal Trap Card
Activate only one card with this card’s name per turn
(1) Target 2 cards in your opponent’s possession (1 they control and 1 in their GY); send that card on the field to the GY, and if you do, Set that card in their GY directly to their field. 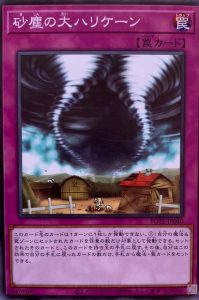 POTE-JP080 砂塵の大ハリケーン Sajin no Dai Hurricane (Twin Dust Trunade)
Normal Trap Card
You can only activate 1 card with this card’s name per turn.
(1) Target any number of Set cards in your Spell & Trap Zones; return to the hand both this card and as many of those Set cards as possible, then you can Set Spells/Traps in your hand equal to the number returned to your hand.

Note: This card is referencing “Giant Trunade” (Hurricane in Japanese) and “Dust Tornado” (Sajin no Ootatsumaki). 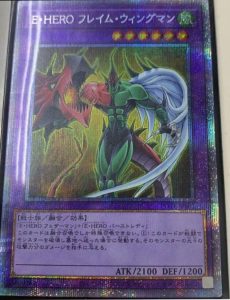