Remember the guy on Maxut who leaked a potential E-HERO Core effect? Same dude.
Proceed to CAESAAAAAAAAAAAAAAAAAAAR with a grain of salt, of course. 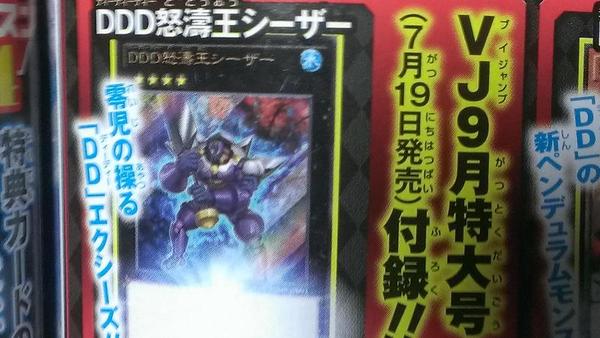 Also PSCT/rulings unknown (no duh), so keep your what-ifs for a later time please

DDD Doutouou Caesar (DDD Caesar the Raging Wave King)
Rank 4 WATER Fiend/Xyz/Effect
ATK 2400/DEF 1200
2 Level 4 Fiend-Type monsters
The ① and ② effects of “DDD Caesar the Raging Wave King” can each only be used once per turn. ①: During either player’s turn: You can detach 1 Xyz Material from this card; at the end of this turn’s Battle Phase, Special Summon as many monsters that were destroyed this turn from your Graveyard as possible. During the next Standby Phase, take 1000 damage for each monster Special Summoned this way. ②: If this card is sent from the field to the Graveyard: You can add 1 “Covenant” card from your Deck to your hand.

SECOND TL NOTE: Rather than “Contract Book”, seeing as they’re not books, we’re going with “Covenant” until we get an official name.

TL Note: The word “Keiyakusho” literally means “written contract”, but since there’s a bunch of other YGO cards with regular “Contract” in the name (“Keiyaku”), we’re rolling with “Contract Book” until we get a better idea of what they’re supposed to be.