Release Date and name’s confirmed, no actual details though. 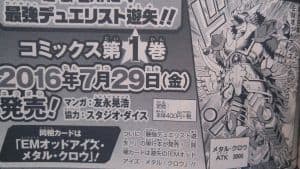 Manga comes out July 29th, 2016 as previously noted. It’s confirmed it comes with a promo:

In the manga it appears in (which is not the V Jump version of the manga), it’s a 3000 ATK monster. Type, Level, Attribute and any other details.

Also due to the nature of the “Strongest Duelist Yuya” manga, all monsters are treated as essentially Normal Monster beatsticks and defenders with no actual effects or pendulum effects, so what if any effects this card has are unknown. In the manga, it was a fusion of “Odd-Eyes Pendulum Dragon” and “Performapal Silver Claw”.